Unable to use Climate Sensor in schedule rule

I am currently unable to control enabling / disabling notifications on a climate sensor using a schedule rule. I’m pretty certain this was previously working, but is currently not. The sensor shows as “unknown device” in the rule screen, as shown in this screenshot. I can confirm that the rule is not enacted on the sensor but works fine on the Plug that is also part of the rule. I have tried removing the sensor from the rule and also putting the sensor in it’s own rule to no effect, and have tried putting other climate sensors in rules the same way with the same unknown device results.

I just tested this on my climate sensors and confirm your findings.

This is an app bug that needs to be reported within the app release thread.

What version of the app are you currently running?

Just posted this in the latest app release thread linking your post there.

I have seen this before with other devices when notification actions are built into rules, but those were fixed in previous updates. This is the first I have seen it in the Climate Sensor.

In the past, if the rule is saved in spite of the unknown device listing, the action still executed and showed a successful execution within the Rules History on an unknown device.

Can you test the rule with the Climate Sensor Notifications On action left in there? Check the Rule History to see if it reported a successful execution in the sensor (which should also be listed as unknown device). Check the sensor settings immediately after the rule executes. Does the notification setting within the Climate Sensor settings toggle to on?

I have this showing up on mine for another device, but it seems to still work.

Curious if it actually works but a display issue

Interestingly the rule appears to have worked properly on schedule this time. There was at least one instance where the rule reported “partial success” and the state of notifications on the sensor was not changed, but I have cleared the rule history for troubleshooting purposes so can’t see that event now. So for now this does appear to be a display issue, unless the rule fails to fully work again.

Also interestingly, in the rule history the device name is shown properly. Only in the rule edit page an I seeing it as unknown. 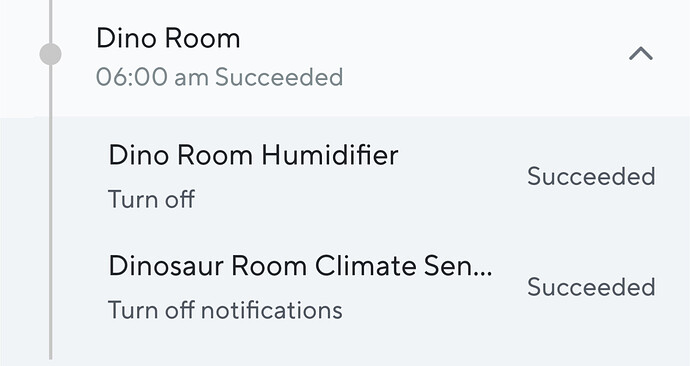