Just got 4 bulb color bulbs today and have been trying to get them working with the Wyze app with no luck. Setup on the app seems to work - detects the bulbs, shares the Wi-Fi info, I even see the bulb connected in my router. But when I try to change anything with the app -color, brightness, etc. - nothing happens. The bulbs are completely unresponsive.

Firmware updates fail every time they are attempted. Tried using both Android and iPad, same results. At this point I’m thinking of just returning them and getting a different brand altogether.

Copy we set up 3 of them last week,and work on the app with no issues at all,we have them set with auto on/off

I am having the same issue.

Bulb adds fine and I see it connected to the network but all it will do is stay green. It is completely unresponsive.

I am having the exact same issues, but with the non-color v1 (2019) bulbs. They get set up and added to the app fine, but controls do not work and upgrade fails repeatedly. Controls for existing bulbs and other devices are working (except I discovered this problem because an existing bulb would not come back online in the app after a brief network outage, which forced me to delete it and then try to re-add it).

The bulb I had to delete and re-add already had the latest firmware (1.2.0.273), and after I set it up it would start pulsing again after a few minutes - as if it’s back in pairing mode. It still appeared in the app as connected during that time. The other two bulbs I tried have an older firmware (1.2.0.146), as they have never been used and in the box for months. They didn’t start pulsing like the other bulb, but just do not respond to any controls or attempts to upgrade firmware once added. They appear as connected in the app.

These are all the original bulbs, which I guess are being referred to as v1/2019 bulbs now. I also have some unused color bulbs I could try, but it appears they are having the same issue according to the previous posts. I have a Google Pixel 5 running Android 12, and the Wyze app version is v2.25.31. I uninstalled and reinstalled the app also, and the issue persisted. I then installed Wyze on an iPhone 7 and had the same issues. That app version is v2.25.32, and the phone is running iOS 14.8.

And I did send a log from the app on my Android phone, and attempted to contact support with the log ID number per the provided guidance. However, clicking Contact Us on the support page brings up a chat bot that I can only describe as…not great. Regardless of which categories I pick or what I type, it just shows the same 3 irrelevant results. I don’t mind jumping through a few hoops to get in touch, as I’m sure it helps filter out requests that are easily solved with some quick answers, but I see no way to proceed beyond this unhelpful chat bot.

I’m just glad I’m not the only one having the issue, as it was driving me a little crazy!

Same problem here. Added to app but otherwise unresponsive. I get prompted to update the firmware - cogs spin for a bit, says updating and then it fails.

Would be nice if someone gets this resolved. I’ve got two bulbs doing nothing… except being green.

Same results via chatbot - I guess I might have to wait to call support or try again everyday to see if it’s resolved.

Same here. I was really excited to try these bulbs and I want to like them, but haven’t been able to use them yet. This is my first time buying anything from Wyze.

Just received a 2 pack today and having the same issue. Tried both bulbs with the same result, just staying green and not being able to update the firmware. The standard wyze bulb that is installed now works perfectly

Same issue here. First light, it adds to app, then goes solid green, but I can’t control or update firmware. So I remove it, from the app, attempt to readd. This time it worked and I updated the firmware. Now can control. 2nd light, added it to app, but same case as the first, did not work. Tried repeating what I did for the first light, but that didn’t work. Tried again with the 3rd and 4th light, but same issue as the 2nd camera. Could not get them to work. So I reset my router, tried again. Not working. Opened ticket with Wyze, and let them know what was happening and they had me retry everything I tried before, but still not working. Basically told a firmware update will be released at some point to fix this, which doesn’t make too much sense if I can’t even connect and install the current update. Also, I check on my wifi for my active clients, and I show the bulbs connected, and I can even ping them with responses, I just can’t control them. It’s not the wifi that they always seem to claim is the issue. Support tech basically said they couldn’t help, and to wait for a firmware update, and closed the ticket. So, I tried a few more times. Managed to get one to connect and update the firmware after I cleared the cache in the app. Here I thought I had the solution, but I tried all those steps over and over, including clearing the app cache, rebooting my phone, resetting my router but the last 2 of my bulbs are still not working. They connect, because I can ping them, but that’s about it. Frustrating to say the least. 100% of the bulbs had an issue, 50% still have that issue. I will attempt again and with other wifis as I get the chance, but I’m about to call Wyze up for a refund.

I’m having the same issue. Let’s me add the bulb but it’s not responsive and update fails repeatedly. The light just stays green. I’ve tried deleting and re-adding the bulb, logging out and in to the app, using a different lamp, nothing has helped.

Still no luck with getting the bulbs to actually work after adding to the app. Hoping that signing up for the beta program might get me some software that actually works. 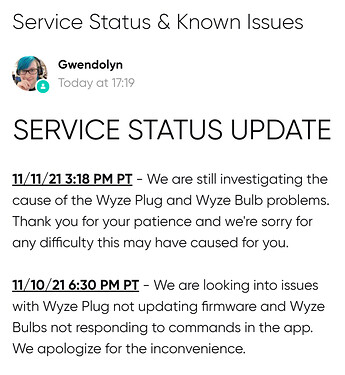 Keep an eye here for updates.

I just received a 4 pack and 2 pack. 3 bulbs went to my ceiling fan. I had to delete/reinstall each bulb about 4 times before they finally worked. The other 3 bulbs are in my floor lamp. I have deleted/reinstalled each about 6 times but only goes to green light/unresponsive to app. The lamp is about 7 feet away from my router in the same room,

As I noted yesterday, I had the same problem as you all. This morning, I noticed that Android had a Wyze app update that was dated 11/11. Applied it and the bulb firmware update worked the first time without a hitch. Check that you have the latest app and give it a shot.

Thank you. I just updated my app and re-added the light and it works fine now.

Can confirm. The newest Wyze app is now working properly with the color light bulbs. Even those I had added previously to the app, but could not control at the time were able to be controlled and firmware updated on after installing the Wyze app. I’m guessing this must have been a previously known issue, and a lucky timing for me as I was about to request a refund. Glad that I didn’t have to.

I have the same issue - except that 3 out of 4 bulbs in the package worked fine, one is just green…

Has anyone found a solution for this yet? Same problem updated app rebooted router. No luck