I have a new thermostat and I have noticed that the downstairs of the house felt noticeably colder than the temp indicated on the thermostat. I got my infrared thermometer and saw that the wall (not external wall, not vents near by). was up to 10 degrees F colder than the thermostat itself. I have an identical unit upstairs wired in the same manner and identical air handler. Could there be an issue in the wiring causing the thermostat to run hot? I am not too concerned for winter but in the summer I could see this causing the AC to run excessively 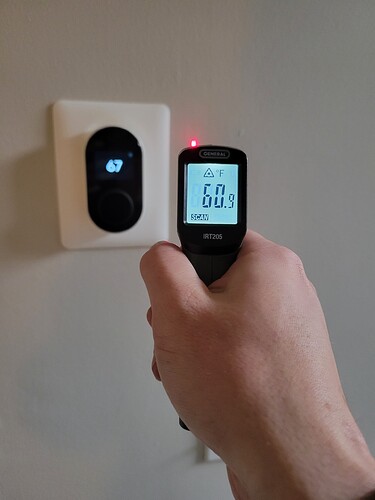 Pic of the thermostat housing running over 80F 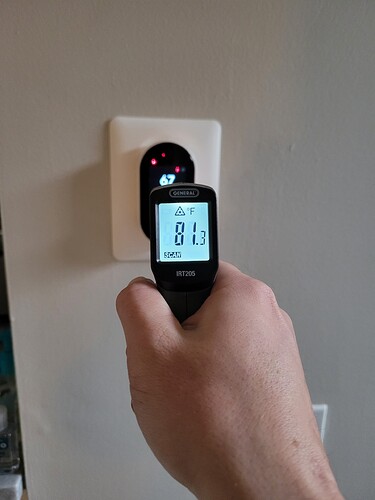 It looks as if it’s doing what it’s supposed to? Ignoring its own internal operating temperature and trying to display the ambient temperature of the room.

There is also a place in the device settings where you can adjust the temp if it is off by a bit.

Glad to have you aboard!

Please review the thread linked below

. It turns out they had a mounting plate with a defect that was causing the Thermostat to heat up internally.

Thermostat overheating while on (running) Home

Sigh, this is the second one that is doing it. Turning it off via the app lets it cool down but it repeats itself. Sometimes removing it from the wall and adding it back fixes it, but having my AC when its less than 68 degrees outside overnight and when 4 room sensors are at or below 70 degrees but the main unit is at 78+… frustrating. Giving up on this; thinking I really need to keep Wyze in their lane of Cameras and Home security at this point; even though they’re failing on both of those o…

Those non-contact infrared thermometers expect an item to be black. Your wall is white, so it will read cooler than actual temp. Stick some black tape to the wall and check the temp again.

I think the same thing. Walls will often be a different temperature than the actual room air temperature (definitely running colder in the winter). The device itself will also naturally be hotter. The best way to confirm the right measurement it would be to get another thermometer hanging in the middle of the room, rather than measuring the wall or an electronic device itself. It seems to me like it is actually measuring the air correctly. I have tested mine with 3 OTHER temperature sensors and my thermostat is pretty accurate. But if I were to use a laser to measure the wall, it would show to be way colder than all of the other sensors that measured the temperature.

Yeah I was feeling pretty good about my little theory until @SlabSlayer posted that defect thread.

I was feeling pretty good about it being the same problem until I read that the laser thermometer may not be right. Might not even be related.