Set bulb brightness & color temp by Schedule without turning on

I’ll get this to the team!

It looks like you should be able to access this through scheduling after selecting “on.” Could you please check your version to see if that is available for you?

Woah. Worked for me. It’s not completely intuitive but it is there.

I’ll give that feedback to the team. Thanks for the confirmation that it worked!

I don’t have access to the app right now to check, but if that’s correct, then there’s a significant discrepancy between the GUI for shortcuts and device triggers (separate color temp/brightness controls) and schedule rules (color temp/brightness hidden under “on” setting). They should be made consistent, using the more intuitive separate controls.

I’ll tell the team! Please let me know when you have an opportunity to test this.

I have looked at the app now. Yes, you can set the color temp/brightness (CTB) for a Schedule Rule, but it’s a different interface than for Shortcut and Device Trigger. It’s hidden away under the On option.

Here’s the interface for Shortcut and Device Trigger: 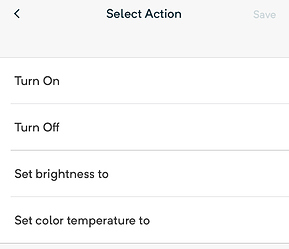 You can use any of the four options alone or in combination.

Here’s what you see for the Schedule Rule action when you first select the bulb: 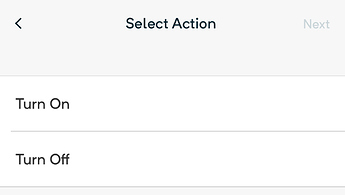 Only when you tap “On” do you see the rest: 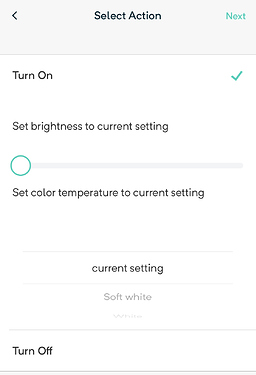 I see no reason the interfaces should be different. The hidden CTB settings under the “on” option will confuse users. I much prefer all three modes to use the interface that already exists for Shortcut and Device Trigger.

This is under discussion now and we appreciate your feedback.

I will be curious to learn if there’s some reason that I have not thought of as to why the interfaces are different.

Thanks for the note and I fully understand the confusion. I won’t go into detail of exactly how this happened (it’s primarily a technical issue that was compounded by a tight timeline due to Plug launch), but do want to make sure you know we have a fix coming soon! Wyze Bulb will have 5 actions:

Sorry for the confusion and thank you all for your feedback, understanding, and patience. We are slowing down and increasing QA so while I want to push fixes as quickly as possible, we are continuing to increase our bar for release to prevent similar issues in the future.

Thanks and have a great weekend!

Thanks for the explanation @WyzeMike

@WyzeMike Awesome! Thanks so much for the update!

To clarify, does this mean that we will be able set a schedule to adjust the temp and brightness of bulbs without turning them on (ie. if I want to ensure that whenever my lights are turned on at night they will be warm and dim, but when they are turned on during the day they will be cold and bright - does that make sense?)

Yup! We’re working on getting that in ASAP.

Just to chime in to your response with @adamsimon, I’d like to see in the future firmware update of the Wyze bulb or the wyze app is to be able to schedule to dim the lights from cool to soft white on a nightly scheme.(i.e. 9pm-930pm).Basically use it as a cue for bedtime for the kiddos. I know that feature is available now under “schedule” but I have to have multiple “schedule” set up to make this nightly pattern. Also when there’s nobody home, I still have to manually disable the “schedule” so my lights wont perform this “schedule” when we’re not home. (thats an inconvenience). As of right now thats my set up, lights dim to soft white at 9pm til 930pm and then I have another “schedule” set to turn it back to cool white at 930pm( which is my prefer light setting).The problem with this set up is the lights performs this schedule even if we’re not home unless I remind myself to disable that “schedule” skill. Hope I explained my scenario well so the Wyze team can come up with ideas how to make scheduling scheme more convenient.

@WyzeMike Thank you for the info. I had a schedule on almost all my lights to set temp and brightness without turning them on. Any idea when we should be reviewing the update to enable the 5 options?

My bulb is controlled by a Sense and will turn on the light when it detects someone in the room. I already have scenes created for the bulb. I just want to set up a schedule to change the scene (not turn on the bulb) that will activate when the bulb is triggered by the Sense. That way I don’t need to specify the brightness and color. 2 cents.

@WyzeGwendolyn and @WyzeMike any update when the separate bulb brightness and color scheduled will be active like @Loki was looking for?

This is exactly what I want. If the bulbs ARE currently on when it’s time for these to change, it would also be great if that could happen over a customizable period of time. Basically, I’d like my bulbs to warm at night, but if I’m sitting in the room with the lights on at the time that event triggers, I’d prefer it to happen slowly over a 5 or 10 minute period, so that I don’t really notice it.

Obviously I could do something similar manually by setting a million different actions, a minute apart. But it wouldn’t be very fluid, and it would be a giant pain to set up. Hopefully this can be built in.

Another action that would be really useful is to flash/blink the bulbs X # of times.

This would be useful for people who want to tie bulbs to specific types of alerts/triggers.