Is anyone having trouble with person detection at night? I have the setting enabled and during the day time all is fine but at night with NV enabled the person detection doesn’t work. I know these cameras aren’t really meant for outdoors but I can literally jump around in front of my cameras and not get a person notification. The all motion setting will trigger the notification but there’s too many false alerts and I’m trying to limit my alerts to just people if possible. Any help would be greatly appreciated.
I’ve opened a ticket and sent my video logs to WYZE.

Thanks for the reply, I did read that while researching my issue. I was hoping to get my cameras detecting correctly before the feature is removed from the app then have it be too late for a return to Amazon. What does everyone’s typical person notification look like at night? Like I mentioned before my cameras don’t even notice me while jumping around like a kid that had too much candy

with all motion on I get alerts but I’d rather just have the person detection enabled and not kill my phone battery.

I work for a large cable company and install all services including home automation/ home security products but hate our stuff. I also have Arlo cameras installed at my house which work as they should for something running on battery, I wanted WYZE cams for CVR on local storage for a low cost and I’m not expecting perfection I just want this feature to work near my cars. We have a problem with people checking door handles to see if their unlocked and stealing whatever they can.

I get home from work in the middle of the night and I would say 9 times out of 10 it flags me as a person when I get home, but I do walk fairly close to the camera. The camera overlooks my driveway and is mounted about 7 feet high. When I get home I walk towards the camera then turn and go up towards the door.
I think the key to it working is grabbing the proper angle. 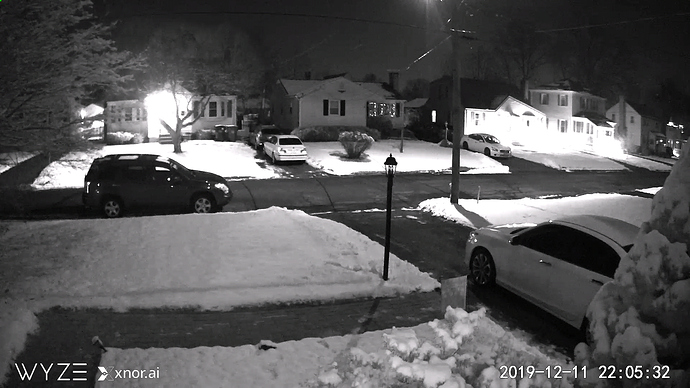 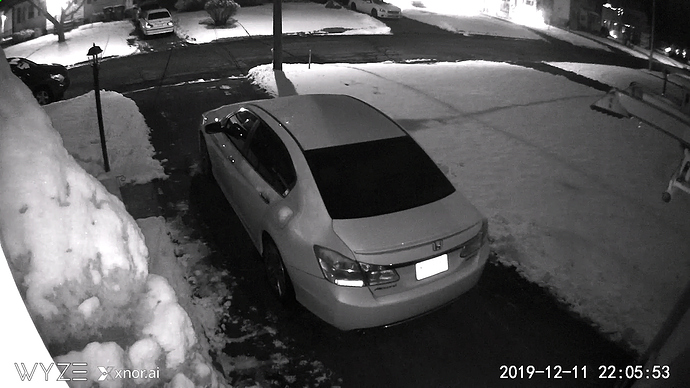 That lower picture almost exactly matches my setup, just mine is mirrored, so its on the other side of the car, so is my walkway. My walkway is basically under the camera so I walk directly towards the cam before going out of sight. I would say your top photo seems to be positioned well also assuming you exit the drivers door and follow the path I would say it should work. Looks like there is enough light also.

Yeah everything is fine during the day just with night vision on. Really bummed out with this!!! I wanted to get more and replace my arlos.

I thought about purchasing a 3rd camera to see if these are defective. it’s just hard to believe the two I have now are no good but working in my field I’ve had plenty of bad equipment.

If the image is clear otherwise, I wouldn’t think it’s the camera itself. Although I confess I don’t have a full understanding of person detection down to the hardware level. My understanding is that the image is analyzed of site using by Xnor.ai and it’s nothing on the camera side itself.

I also noticed my detection zones keep resetting for whatever reason I’ve moved them a bunch of times today.

Those pics don’t look bad, but the foreground car is probably more inside the 2-20 foot recommendation than the street car is. Maybe you can power a cam at your yard light for a closer view of that one?

Other than that, the cams should person detect during night vision. Mine do.

This needs to be addressed by Wyze along with why the detection zone can be set smaller on large-screen devices and only coarsely on small-screen devices. I haven’t personally reported this to them, as they are growing so fast manpower is very limited. So I’ve just been living with it, and using my tablets instead of my phone to set zones, and not re-entering after I set one.

As far as jumping up and down in front of your cameras, I’d be the AI says “that can’t possibly be a person!”, lol. Seriously though you do need to keep in mind 5-minute cool downs and any other limits.

Here are some do’s and don’t for person detection:

My understanding is that the image is analyzed of site using by Xnor.ai and it’s nothing on the camera side itself.

The detection actually happens entirely on the camera itself, surprisingly enough.