I am running 8 Wyze Cam V2s and I recently just purchased 2 Wyze Cam V3’s to replace my front and back door cameras. All my V2 cameras had access to Person Detection since I was a beta tester at the time and therefore was given access to the feature free of charge. After my free Cam Plus trial expired on my V3 cameras, I cannot find them in the list under Services → Person Detection (Pilot). This is really disappointing considering I need person detection in the front and back cameras. The main reason I changed cameras was for the color night vision feature which helps a lot in my case. I do not want to have to revert to my V2s to have person detection back. As you can see, I am a big Wyze supporter with the amount of cameras I have purchased and I have recommended the products to many people. Can anything be done to resolve this?

Welcome to the forums! The “name your price” person detection (pilot) was offered before the V3s were released, and the PD pilot was only offered for the v2 and pancam. Currently the only way for person detection AI on the v3 is through Camplus.

Here is a snippet from an email about the PD “pay what you want”. 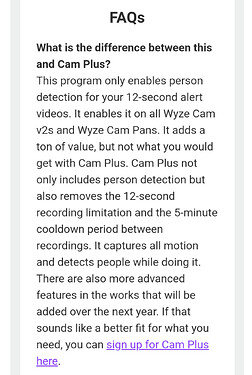 Yeah, it sucks, but the legacy person detection only works for the older cameras that used to advertise it for the people who bought them a long time ago. When they launched the service it made us all confirm that we understood it would only ever work on V2’s on Pan Cams and would not be available on any future cameras, including the Wyze Cam Outdoor (which existed at the time), and then later the V3 when it launched.

Surprisingly, Wyze has allowed it on the WCO, at least the last time I checked (I usually have Cam Plus on my WCO, so haven’t checked recently and this might have changed), but it has never been available for the V3.

As for whether something can be done about this…the best answer is “no.” Though there are a few qualifiers to this “no” and some of them can be considered as alternative solutions:

In the end though, V3’s will never get the legacy free cloud person detection. Wyze has told us this repeatedly, and had a big disclaimer graphic when we signed up for it that made us agree that we clearly understood it would never be available for anything besides V2’s and the Pan Cam and no other future cams could use it. Disappointing for all of us, but I too still bought some V3’s because that starlight lens is so awesome.

Thanks for the info! Love the quick reply!

Thanks for the info! Love the speedy reply!

Well, they also said that if name-your-price is successful they might consider extending the concept to other services and audiences.

True, I should’ve listed that, but I never truly believed in it. As I recall they had indicated they would review some data after “a couple of months” then see if it was even sustainable for the limited people who were allowed on it, then consider expansion.

It’s been way more than a couple of months now but we haven’t heard anything.

I am guessing they ultimately decided just to run with Cam Plus specials instead. People rarely buy V2’s anymore, and so their Legacy Person Detection expenses are constantly falling, but it wasn’t a very effective (financially stable) experiment with so many refusing to pay for it.

I have seen this issue before (happens to me with brand new activated V3’s sometimes).

Go to Account - Services - Cam Plus - Edit - uncheck the camera from cam plus and click activate. After a minute or so, go back in the same way and put the check back on the camera and click activate again. Then click on the camera in that cam plus screen and make sure Person Detection is turned on. If you only want person detection notifications, then maybe make sure person detection is the only option turned on, not the other AI options).

Now go back to the home screen, select the camera - settings - notifications (should say “PLUS” next to it) - Turn on “Wyze AI Events”

Usually doing that will fix the problem.

I tried this a couple of times and still no person selection on the app.