AI does work with a detection zone, but if there’s any overlap it will detect it.

For example, if the head of the person is inside the detection zone, it will scan the entire person.

Good to know it is supposed to work but there is no overlap at all in my case
I have the front porch isolated and it gets triggered by every person walking by
any suggestions on how to make it not detect people outside the zone?

Can you send a screenshot of your detection zone 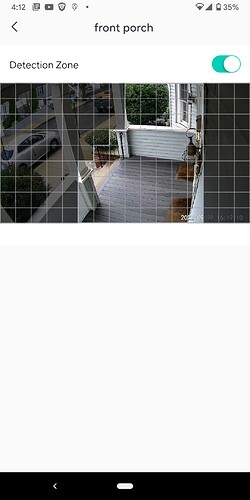 The detection zone on my Video Doorbell seems to be ignored as well. I routinely receive notifications for vehicles on my street when I have intentionally grayed those areas out (I only want to see if someone pulls into my driveway). I’ve reset it a few times, but I have just given up on it ever working as expected. 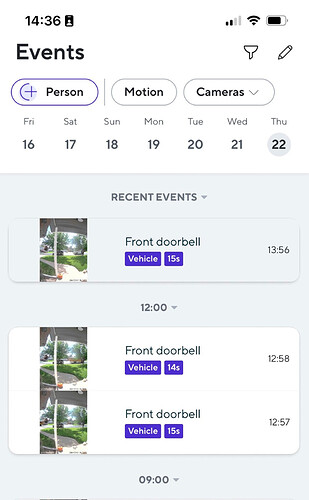 The only thing I can see is that the one square on the left bottom row if squares you have grayed out there is a single square that isn’t due to your driveway in that square, but there is also part of the road. I would be interested to see one of the videos to see if it is picking it up there.

I grayed that out and I will see how things go. I left that one in there because I want to see cars entering my driveway…but maybe the camera is detecting in that smidgen of road.

I figured that is why you left it out, and I am not sure that is the issue, it is just my only guess because I am not seeing any shadows or trees or anything else that could set it off.

I have had that corner blocked for a few days, and I think I’ve figured it out.

I think ANY motion anywhere in my motion zone triggers the recording (as it should) but then the camera reports EVERYTHING in its entire field of view, not just items in the motion zone. So, it is triggered by whatever in the motion zone, then reports the cars parked on the street.

I kinda wish it would just ignore those and only report in the motion area, and never report anything ever in the grayed out area.

yeah but I am specifically speaking about person detection which gets detected totally out of the detection zone ,not motion

And I have noticed that when I get the person detection out side of the detection zone people walking by on the sidewalk are outlined head to toe with the green rectangle in the person detection video clip, not sure if it is just supposed to do this no matter mater what or if means anything , maybe when it does work normal it sill outlines them even if they are outside of the detection zone ,
also I am pretty sure I never had these issues with the old V2 FW’s , the ones that had the draggable outline instead of all the little squares , it seems like this issues came along when they switched the way the detection zone is selected , not sure if it popped up on the first version that used this new selection method or shortly there after because i had been using the RTSP FW for a long time with no issues until they dropped support for it and broke voice assistant integration
that is when I switched back to the latest version of the main fork and that is when I started having these issues.

The detecction zone doesn’t work for me either. Something just isn’t right with it. In playing around with it for hours and hours over weeks and months since I’ve had the system, Ive just given up on trying to set a detection zone . In one test I litererally had ONE pixel highlighted as my detection zone and it still notified EVERYTHING that walked,crawled, blew or drove into the cameras frame of view. So, it just doesn’t work. . Ive given up and just use the system to record every waking moment figuring that if something happens I’ll have to go through all the footage and find the event. But that’s pretty much what I had to do before since it was triggering to everything anyway. Even with sensitivity settings turned down to just about nothing, it still alerts to EVERYTHING on screen, ignores the selected frames And this is on all 5 of my cameras, inlcuding the doorbell one. It’s frustrating, but it is what it is. You get what you pay for. These are like $40 now or something

. If you want something that works, I guess you gotta pay for it. Oh well. When they fail, I’ll go with something else on my rental properties.

Yeah well it used to work great , i would still probably work great if you flashed an older FW to the cams but then you would not get the voice assistant integration working because it is no longer supported with older FW
I am getting really sick and tiered of these big tech companies constantly changing their API’s
constantly , they never add anything useful or make anything better , they make it S itier and S itier and just break things and remove functionality , Google is the absolute worst when it comes to this S , but amazon is quickly catching up , every time they “update” their API some of me devices stop working and I have to go out and buy all new S
some times there is not even any option for a workaround or replacement either it’s just permanently broken and there is nothing you can do about it
Google Amazon and Samsung have all done this , nearly every smarthome product I have bought as ended u- in the trash after not even 2 years because of this crap I am really getting sick of it , Hue bridge, smartthings hub , broadllink RM pro , lots of devices that worked with ST but no longer do , all rubbish now.
There really should be a law that says they cant sell this garbage and then later remove functionality or render the device useless through “update” or server side changes" they should not be allowed to push "updates unless they are confirmed to not break existing functionality because this ALWAYS seems to be the case
buy a device , then they slowing break it and remove features with each successive “update” until the thing is not longer capable to doing what you bought it for in the 1st place just outright doesn’t work at all anymore.
There is no backward compatibility with these API "updates which really pisses me off to no end
if Amazon changes their Alexa API they shold make sure t does not break compatibility with anything first , like the old Wyze cam FW’s they should all still work even if the API changes but they don’t so we are forced to update the Wyze FW to newer broken one with less functionality , no RTSP and no working detection zone.

New to the Wyze hardware and I’ve noticed as well that the AI doesn’t respect the detection zones.y garage cam is always sending notifications for vehicles despite having the entire road blocked off from detection. It’s annoying, not the end of the world, but I’m sure the Wyze developers are aware of the issue. It’s just a matter of ensuring the software respects the detection zone when using the AI. If I had to guess they are likely aware of the issue, have it in a future sprint to address, but likely not top priority as they’re likely trying to roll out other features.

But, if a developer is reading these comments, then I’d suggest that anything with “AI” in the feature name is going to be scrutinized heavily by users given that it’s “AI”. So if you want good reviews of your software you should ensure that any defects/bugs are addressed in upcoming sprints. Add other features after your defects/bugs are addressed. I would submit a feedback specific for this issue in the app, but the AI option says “coming soon” for feedback issues.

Overall I’m impressed with the Wyze products so far that I have and I’m looking forward to improvements in the AI.

I have the Wyze Doorbell Pro with Motion Detection zones (and Cam Plus) and it works like this:

You can calibrate the [Motion] Detection zone, this is set locally on the camera to ignore parts of the frame for when it starts/stops detecting motion (sending video to the Wyze serves for analysis).

The Wyze servers then perform AI detection on the entire frame (full video) sent, to detect and notify you for any Person/Car/etc found.

If a person or car happens to be in view when motion is triggered CamPlus AI will detect and notify.

If you have Cam Plus and your camera has a road in view i recommend turn off Vehicle AI - and set only notify for AI events. That way, cars will be quietly recorded as Movement. But People AI will notify you on your phone.

I recall an article that the AI detection used to be constrained to the motion detection zone, but that is no longer the case - probably because for most recordings a person would be much taller (outside) the motion zone.

In m
y case there is absolutely no overlap at all it straight up detects people who are 100% outside of the motion detection zone no matter what (V2)
See the photo I posted ,it is detecting people walking by on both sides of the street

@IEatBeans on my Video doorbell pro the AI detects Vehicles (and people?) outside the detection zone with no overlap, after a motion trigger inside zone .

Do you have a link to the announcement for this and which devices currently?

I don’t have the link, but in an AMA with the AI team they said this was implemented, but didn’t say which devices. I’m guessing all, since it’s probably a cloud change.

You said video doorbell pro. I’m not sure exactly what one has this issue, but I have read about detection zone issues on one of the doorbells. It may have been fixed in a recent beta? @SlabSlayer would you know any more?