Can the contact sensors be used outdoors?
Motion sensor vs sense
Lost half my sensors
Camera Sensitivity setting when using motion detectors
marcogerardov May 15, 2019, 6:12pm #2

I have a garden with doors that I would like to monitor, would be a great idea to have them water proof for rain and probably a better material to be strong enough to be expose to the sun rays.

Wyze should make outdoor “Wyze sense”. Then you can monitor what happens outside as well as inside.

Indoor sensors are great, but to deter trespassers from going into your property you need to project PIR from a wall, instead of from under the eaves. The 26 feet PIR from the Wyze Sense would be sufficient for most applications. Connecting the Outdoor PIR Sense to lights, cameras and even a Wyze Outdoor Plug to power a water pump and sprinkler system would deter even the most determined thieves.

I’d like to see a modular outdoor Wyze system to use as a deer and critter repellent.
From this basic idea: https://www.amazon.com/Wikomo-Ultrasonic-Repeller-Waterproof-Squirrels/dp/B07TFKBN8T/

I cannot agree with this discussion more. A lot of the current Wyze Sense products seem to be geared towards a niche of people wanting a simple inexpensive somewhat security type of application for indoors. For Wyze Sense to be useful for someone like me who already has traditional security inside, I want it outside watching my front porch and driveway area so that I can have better proactive security to catch things before they can happen. I tried doing this with my Wyze Sense motion sensor but it went off all the time for no reason. I even tried adjusting where it was pointed several different ways but the false positives persisted. I put it back inside then it worked fine. One awesome thing about it is that there is little to no cool down period so it did a great job of capturing everything for the camera that it was paired with. Seems that outdoor rated smart home type of products take a bit of extra development. I am waiting, that is all I can say to Wyze for now but… 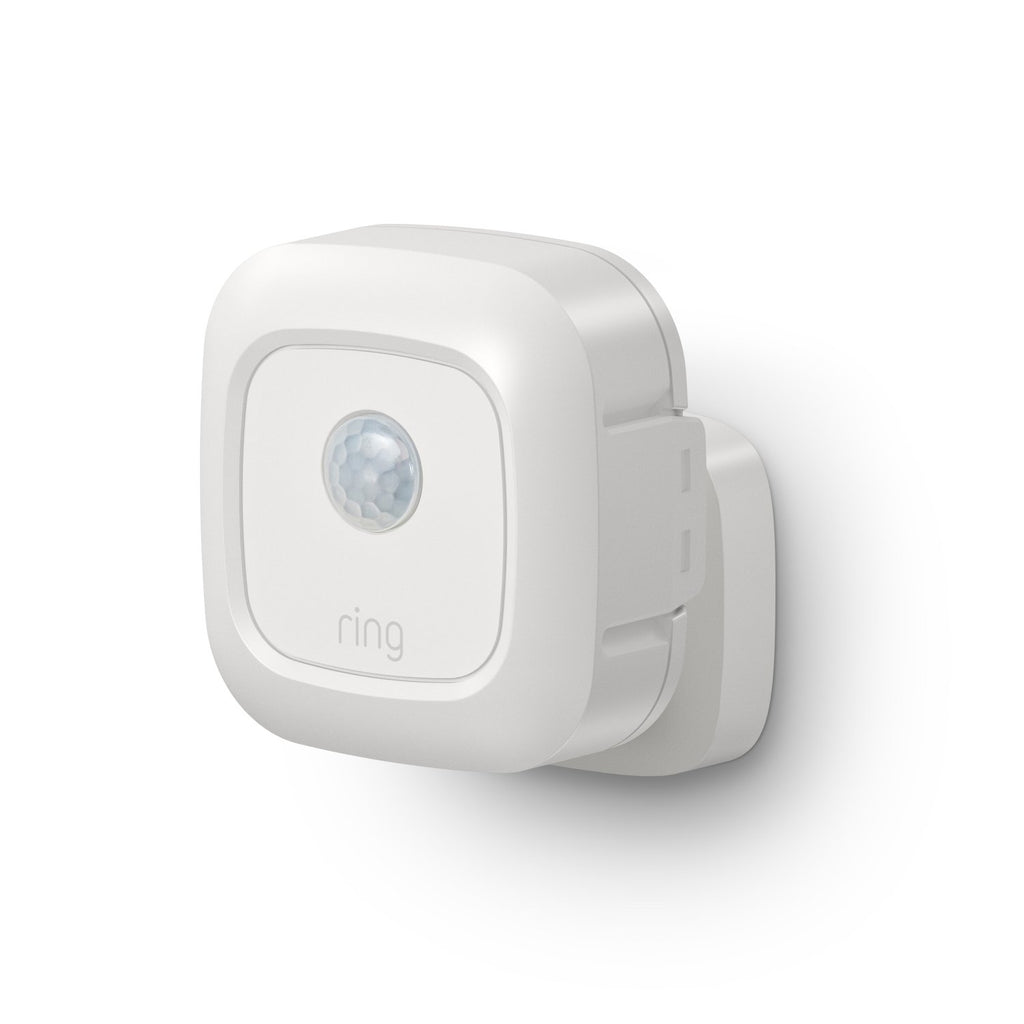 Extend the range of Ring lights, doorbells and cameras with a battery-powered motion sensor that links to the Ring Bridge to activate connected devices.

It would be pretty slick to be able to put a Wyze version of one of these in an unsuspecting place outside where no one would have a clue that they have been detected by a little tiny sensor.

NEW PRODUCT: A WIFI SMART direct replacement outdoor MOTION SENSOR for standard Floodlight Motion Sensors. This would connect with HomeKit and also have a Remote WIFI Smart switch for turning on a set of floodlights, and run off of 110 volts. This way, One or More Motion Sensors could be programmed to operate one or more sets of floodlights. Also floodlights could be programmed to turn on and off according to schedule. Connection through 1/2 pipe threads to water proof box, as is standard with flood lamps.

In the mean time I’ve used Scotch Brand 860 Adhesive Putty Removable, 2 oz. to water proof the motion and contact senors. They have been in full rain ever since they made there dabue. Not sure how they will work or hold up in freezing condition though …no snow where I’m at.

Removed the factory mounting tape, inwhich the sticky putty will be used in mounting.
I used small peices of clear Scott tape over reset holes and others to prevent the putty from making its way into.
Roll out the putty between parchment paper and covered/incapsalated the entire contact senors with it.
On the motion sensors the same up to the detection dome.

Have contact sensors on 2 gates outside exposed in full weather …with Alexa saying “hey no tresspassing” when opened.
Have a motion sensor in full weather inside a stone wall placed inside of a hold that a small stone fell out of. Extreme hard to notice, the beauty of the Wyze can sensor is that they are sooooooo small !

I’d post up some pics if I know how?
Signed …newbie.

I’d post up some pics if I know how?

Thanks !
This is one of the contact sensors on my gate outside. 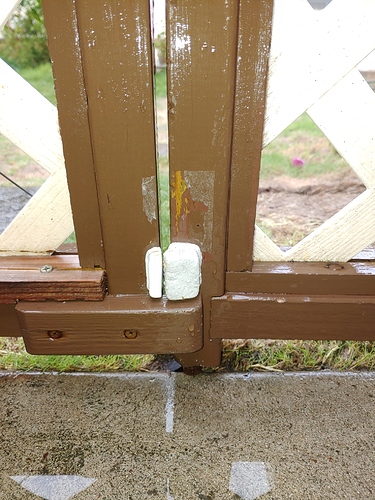 This motion sensor in side of my stone wall which shoots across the driveway. 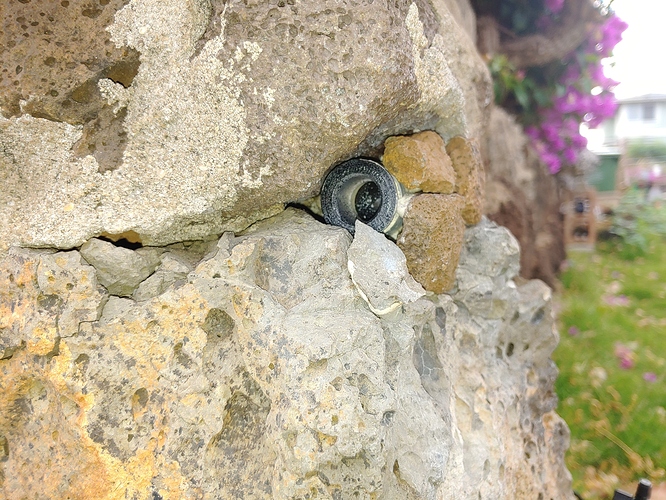 This motion sensor is under my eaves of my roof. Shooting downward at an angle to a small driveway entry. 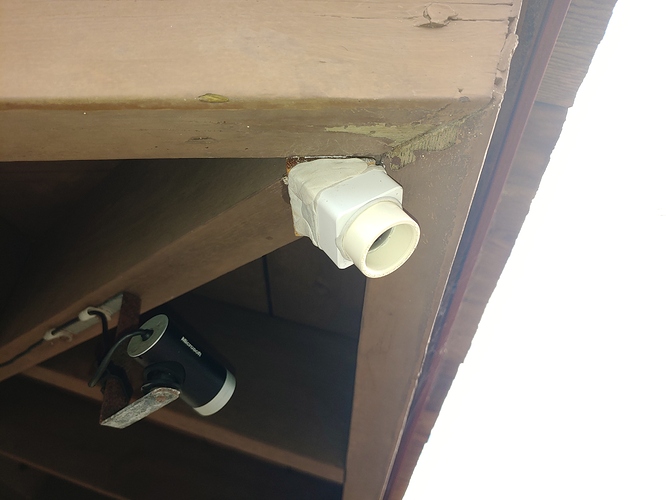 This one is out side in my breezeway shooting downward but I sealed it just in case. 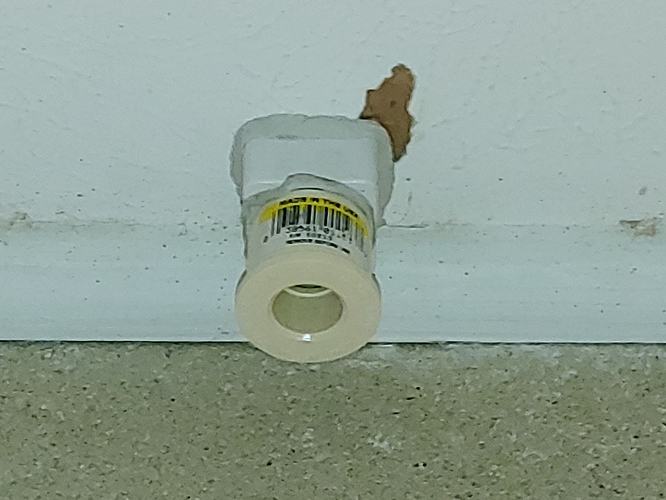 20191223_0836114032×3024 1.81 MB
I
With the motion sensors i used a short piece of plastic pipe to narrow/reduce the detection angle making it like a laser beam …less false tripping …only need to know when someone breaks across then the assigned cam can take a video.

Have you had to replace any batteries yet?

No sir …not yet.
But if so this putty is easily remove with no mess left behind.
It also can be reused …just needs to be kneaded like bread dough.

Nice. The PVC “focuser” is a smart idea if you just want to use it like a tripwire basically.

Thanks…
Yes…also projecting it downward also has benefits.
The trick is how much radius one needs for the height that will be used, which is directly related to the length of the plastics pipe used.
Keeping the detection zone at it’s minimum to reduce false trips from things like cars driving pass.
The one motion sensor on the eaves has the width of the entry point that over laps on to the side walk.
If someone just walks by it triggers but if a car pass it doesn’t.

There is also a type of plumbers putty that you can use that is reusable that you could put around it and would waterproof it.

I would love to have a weatherproof Wyze Sense option so that I can monitor my gates for my fenced in yard. It would be great to both be able to monitor people coming and going and to protect my dogs.

Would love weather resistant or waterproof contact sensors. Ideal uses would be for gates and fences. I am currently replacing contact sensors every few weeks after a rain storm that wipes them out but would love a more long term solution. I also notice there is not much else on the market that offers weatherproof gate/fence sensors. Seems like a perfect opportunity to lead the market in offering this. I would prefer to keep in the wyze ecosystem which is why I haven’t ventured to other options (though limited) but replacing every few weeks is becoming exhausting.

A waterproof version of the hub based sensor kit? Should be able to stick to a variety of surfaces including wood, brick, paint, and metal. A range of 50+ feet would be great! I want to attach mine to my fence and gate to trigger events when someone comes through (turn on the lights, capture a video, etc)

Okay now that you figured out how to have a waterproof camera, how about the contact sensors?

I like getting notifications when the front or back gates are opened and when I get mail. But since you can’t have the sensors in contact with the weather, I’ve had to be creative and mold clear plastic sheets to provide some protection from the weather especially rain.

But more can be done. I don’t have a 3D printer so I can’t design anything. I can’t put them inside a plastic box because it will cut the signal which is already at the max distance limit.

Come on Wyze, you can do this (or sell cases for the sensors (both sides).

I found someone on Pinterest who sells cases for the sense. Come in 4 pieces, one for the magnet and the others form a protective barrier around the main unit (box within a box).

I have one motion sensor mounted outside my kitchen door but would like to add 3 others for the additional doors. One, the front door, could be mounted under the eve. The other two would be on the south, weather side which means direct blowing rain.

I would really like a waterproof/water resistant version of the sensors, especially ones that are less sensitive than the cameras are to unimportant movement.