I bought three outdoor cameras. For all practical purposes they are worthless. I wanted to capture cars entering my driveway and they never trigger. I walked down the driveway and the camera activated when I was about 10 foot from the camera. Which is also a worthless feature for a security camera.

The camera doesn’t sense the car movement which is the number one reason I bought the camera. Wyze apparently did everything they could to extend the battery life in the cameras at the expense of being a good security camera.

I would prefer to have a shorter battery life so the unit can capture cars entering the driveway. Now I am stuck with 3 outdoor cameras that are worthless.

The Wyze development team didn’t ask customers what they wanted in an outdoor camera. Instead they put all the effort into conserving battery life which has made the camera useless for security use.

Ford made the Edsel which was a big flop and Wyze now made the outdoor camera which is useless.

I have 4 Outdoor cams. The one on the East side of my house faces my side yard and the dead end street in front of my house. People come down there and turn around in the court over 20 times a day and the cam tags them, over 45 feet away. You need to check your detection zone. It works best when cars/people are going across the zone not straight at it (the camera). Turn your camera to the left or right a little bit, The detection zone is quite wide.

From the cam to the gate on the fence is 26 feet 7 inches, The other side of the street is another 30 feet away. 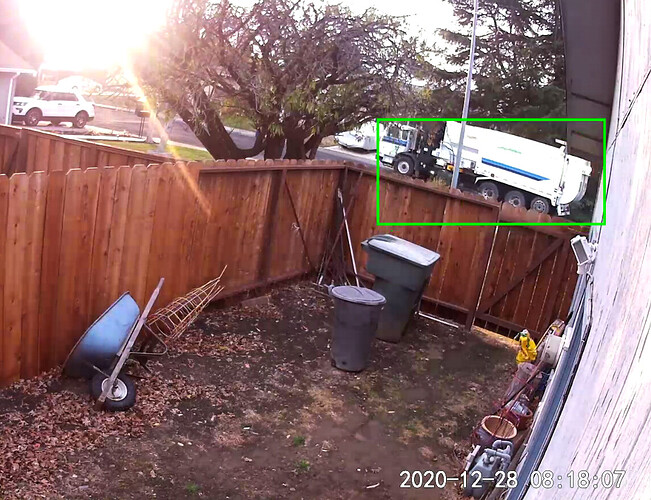 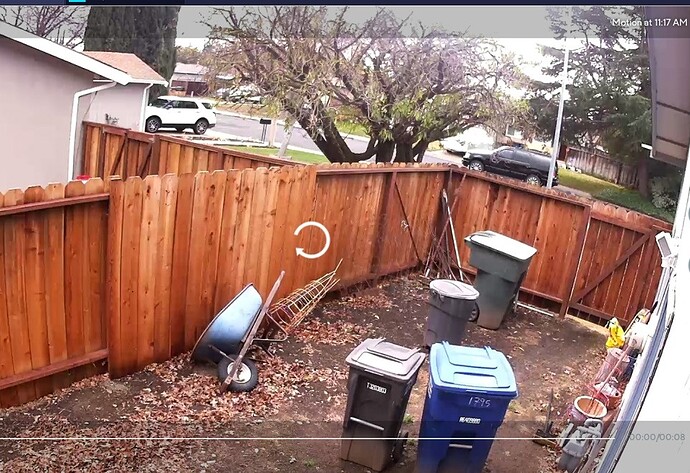 I do have several original Wyze cams mounted outside and they do have a much better range. But I was interested in placing a camera down at the end of the driveway to capture the license plates of cars entering my driveway.

I had to order the SD card to install in the base station and the remote Wyze cameras so I can zoom into the license plate. I did adjust the camera and it does seem to work a little better’

After I install the SD card I will see if I can zoom into the license plate. Unfortunately cameras do not deter theft. Everyone is wearing masks and gloves. All the camera does is show people stealing your stuff without being able to identify them. That is why I am interested in getting a snap shot of the license plates.

Only 18% of thefts are ever solved so getting a plate number is a big help.

WRONG.It is a outdoor cam with cam plus and it has motion and person detection. 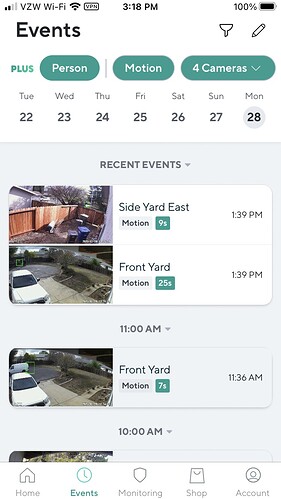 Wow what a ripoff. I bought 5 cameras over a year ago and all those features were free. I must have been grandfathered in with the old cameras. I just bought the outdoor cameras. I did not know that Wyze now charges you an extra fee for services that used to be free.

I remember when Wyze first started. They said they were going to provide free services. I am shocked that they don’s allow extended recording to the local SD card like my original camera.

I guess even Wyze doesn’t keep promises. I guess I will have to pay the monthly fee is I want my new outdoor cameras to perform like my original cameras.

Hi Antonius (or anyone that can help!)

I have the outdoor cam and paid for the cam plus, but I am having the same issue as mike4. I have a nest cam which picks up all movement, but I need extra cams for different angles and I am currently testing to see how much Wyze picks up or misses.

The wyze cam missed a recycling truck rolling by, a mailman walking up to my door and away from my door, kids walking by the house with bikes, and much more. I am attaching a clip of what the nest cam picked up as well as images of what my Wyze cam sees and the set up I have for detection.

Any ideas as to why my motion is being missed???

Link to nest video (new user so I cannot embed) Imgur: The magic of the Internet

Link to what my Wyze cam can see (can only embed 1 file as a new user) Imgur: The magic of the Internet

. If you want to view a person coming down your driveway I would turn the camera to the right until the left end of the detection zone is even with the white fence on the left. Detection for the outdoor cam works best when the object you want to see is moving across the zone at an angle left to right or right to left not straight a the cam. Make some minor adjustments both vertical and horizontal and try it out.

Waited to long to edit again. If the mailman is coming from the right and you want to tag him headed for the driveway move the camera to left a fraction so he is crossing right to left across the zone. The cam will not tag him walking down the sidewalk in front of your house, to far for a person I think. My front cam will tag people about 40 feet away when they walk across the detection zone, big vehicles are detected further away, FedEx/UPS/USPS and trash trucks/SUVS’.

Thank you for replying and for the ideas. I had no idea heat was used to trigger a recording. I had my camera inside pointing out the window. When I moved it outside, it started triggering motion events, but it is still missing so much even with your suggestions being followed. I just don’t get why it is missing huge vans, trucks, and people.

I even tested myself walking around the white SUV on my property and even though I was circling it for a minute, the video was for only 7 seconds. I really want this to work as the price of this equipment is such a positive, but if it doesn’t record or doesn’t record enough then it just cannot be trusted for when it is really needed.

edit: I cannot even reply to my original post anymore due to forum rules. WTF?

I will be trying the V3 once I can get my hands on one without paying scalper prices.

As for the outdoor, I just watched a UPS truck back down my street slowly and the cam did not pick up the motion. I’ve watched other vehicles come down the street while watching live and I see the green motion boxes surround the cars and yet it is still not captured by the camera. WTF?

I don’t mind tons of notifications. I want things recorded in case I or my neighbors need info in the case of an accident or break in, etc. I have tried many combinations in settings for detection and nothing is working.

It is less than 40 feet to the street.

I moved some of my 4 cameras 4 times before I found a place I liked and where they detected people/motion in the areas I wanted them to. The out of the box cam will only record for 12 seconds if motion is continuous then it has a cooldown period where it won’t record, I forget what the settings for that are 1-5 min?. I have Cam Plus and I have the settings set to no longer than 2 minutes of recording with no cooldown period. It will still only record if there is motion, motion stops the filming stops, that’s the way it is. With no cooldown it will start recording again as soon is there is motion again.
The Wyze outdoor cams use a different sensing method than your Nest cam.

Maybe you should of purchased a V3 cam which you can use inside or outside for $20.00. You could put a SD card in it and live stream it, depends what you are trying to do. Of course you need to have someplace to plug it in as it is a wired cam.I have no wired cameras because I only have one outdoor outlet at the back of the house and I do not feel like drilling holes through my walls and running power wires.

How far is it from where you have the out door cam to the street?

If the cams are so horrible, I’ll take them off your hands. $5 each for a “useless” cam?

Ahh, something even more worthless: richie hoe’s post. Feel free to pick my cam up from Wyze as a refurbished unit. I think it is getting returned.

I will be trying the V3 once I can get my hands on one without paying scalper prices.

As for the outdoor, I just watched a UPS truck back down my street slowly and the cam did not pick up the motion. I’ve watched other vehicles come down the street while watching live and I see the green motion boxes surround the cars and yet it is still not captured by the camera. WTF?

I don’t mind tons of notifications. I want things recorded in case I or my neighbors need info in the case of an accident or break in, etc. I have tried many combinations in settings for detection and nothing is working.

It is less than 40 feet to the street.

a UPS truck back down my street slowly and the cam did not pick up the motion.

The cameras have a 5-minute window where motion won’t be flagged. But if you have an SD card every motion is captured. Search for “5 minute cooldown”, for details.

I have Cam Plus. No cool down period.

I noticed the outdoor camera will not detect my car leaving the driveway when it is cold. The motion detector depends on heat and a cold car is invisible to the sensor.

It is extremely disappointing that Wyze removed the local storage on the SD card not unless you pay the 2 buck per month fee per camera they recently implemented.

As the Wyze cameras die, I will not replace them because I don’t want to pay 2 bucks a month for each camera.

I already have been looking at a stand alone home based camera and recorder system to replace my Wyze cameras.

Wyze will go the way of the X10 home automation equipment of the 1980’s and 90"s. They are repeating history.

Well OK, but check back later to see if the motion was recorded. It’s my experience that notification is delayed if CamPlus is activated. That’s why I disabled it on my cameras, except for one.

That’s a good comparison.
I had a bunch of X10 cameras, remotes, plugs and the accessories.