So I ordered two of the Outdoor Cams on the early access program… There definately are some nice features, and they are generally working well. I’ll reserve full comment as I get to use them more.

The question I have is, has anyone had success with MicroSD card recordings? What capacities and card types did you use?

I’m having a problem out of the box with the two cameras and the base station accessing the MicroSD Card. All three devices show “MicroSD Card Not Available” even though I have a MicroSD card installed. I used the exact same SanDisk 128GB cards I use in the V2 and Pans in these, and all three devices cannot access the cards. I’ve tried power cycling all three devices, and I’ve inserted/re-inserted cards, and tried a new 4th card, no luck. I’m about to order a 32GB card just to see if that helps.

I understand that the spec is listed at 32GB max, but we all know many people who have had success with 64GB and 128GB cards in V2 and Pan cameras… this seems to be a step backwards, you would think that the newest hardware would support the same or larger disk/storage sizes than the older hardware. Thoughts and experiences from the group?

I too am having the same problem with a 32gb card.

Well, that’s concerning. I see in the latest release notes they changed something related to SD card file structure, I wonder if there is an open bug on this?

I just got it to work by reformatting to FAT32 (again). Inserting the card with cam off. then turning the cam on again. I hope this helps.

I have to assume that you’ve used the cameras formatting capability to re-format the cards?? If not, perhaps that would help.

Yes, I had to do that right after the formatting on the computer, otherwise the card would not even be recognized.

sounds like maybe the camera has a defective card reader

I have 128GB MicroSD’s. FAT32 is limited to 32GB. I took the cards out of the devices, formatted them on the computer with ExFAT. Still did not work with a power cycle. I doubt I have two defective cameras and a defective base station.

I’ll see what my results are with a 32GB card that should arrive later this weekend.

If you insist on using them, do this (this has been posted before):
Try using “exFAT”, not “FAT32”
(“exFAT” was specifically designed for SD cards)
If that doesn’t work download and try the SD Card Association formatter.
This one is the best, IMO.
This formatter has made SD cards work that I thought was dead.
Good luck.

I too have my new Wyze Outdoor Camera and base station. They both say “SD card is not available” and I have tried two cards one 64GB and one 128GB. I have formatted them on my computer using exFAT which is all I have as an option to format on my computer because I can’t on the camera or base station since they are not available. . I tried the SD association app mentioned but that made no difference.

I am using a larger card because that is what I have. I shouldn’t have to buy a card when I already have spares…

From the Amazon listing:
'Plus, you can add an 8GB, 16GB or 32GB microSD card"
From the Wyze website: 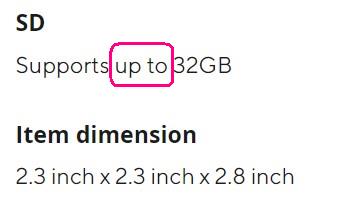 Wyze website1243×394 49.8 KB
Sorry, yes, some people seem to get away with larger cards, but there is no guarantee. Most of the SD card complaints are from people using cards larger than 32Gbs.
Don’t keep beating your head against the wall trying to make larger cards work.
Alex777 August 10, 2020, 3:37am #15

This is what worked for my new Wyze Outdoor Cam I received today:

I always reformat new cards with the SanDisk utility. I do a complete re-format and have never had any problems getting my cameras to recognize or work with these cards. They are for the most part 64GB cards.

Edit; My utility only allows exFat and NTFS for these cards so I chose exFat.

I figured out that the key is fat32 formatting. I downloaded a utility and formatted a 64 gb card in fat32 format and it works in the base station and shows 64gb. exFat does not work.

Weird. I have had exactly the opposite results. The exFat formatter was designed specifically for SD cards, especially those over 32Gb. Go figure.

This is what worked for my new Wyze Outdoor Cam I received today:

That’s a good idea for those who have a USB>microSD card adapter.

For those who don’t have an adapter, but have an SD reader/writer in a laptop or whatever, just download a FAT32 format utility like this one from Ridgecrop. Click the picture on the webpage to download.

For those who have neither, but have an existing v2 or Pan cam, just stick your card in the cam and format it via the Wyze app. The Wyze app will convert your exFAT32 formatted card to a FAT32 formatted card usable in your WCO or base. I just formatted a new 64GB and 128GB in an old v2 cam and stuck them in my WCO units and they’re working fine…

When you go into the WCO cam settings to “see” your SD card, give it a few seconds to read the card. The larger the card, the longer it appears this takes. My 128GB card shows up in settings after about 4 seconds.