Referring to the V2 camera. What is the maximum usable SD card size? I see references to 32gb and 64gb…

32GB officially. Users are reporting cards up to 128GB have been working.

Another user has reported 250gb.

I wonder if the 250Gb was formatted in the wyzecam?

Can someone on the Wyze team confirm what the max capacity SD card allowable in the v2 cam is? Your customers are guessing here and this is a simple technical specification that you should be able to easily communicate.

Hi! Every Tuesday WYZE posts a video on Facebook explaining different features of the WYZE cameras. They did a video, which you can also find on YouTube, which explains why they recommend 32gb name brand SD cards. She mentioned that even the V2 will continue to recommend the 32gb SD card. With that being said, there are plenty of folks who use 64gb SD cards with no issues! Some even use larger SD cards in the their cameras however WYZE still recommends 32gb SD cards.

I’m going to take a wild guess as to why Wyze recommends a 32 GB card as the maximum size. The maximum size SD card that Microsoft Windows will format using FAT32 is 32 GB. And in the beginning the Wyze app did not have a format function built into it. So, to avoid a technical support nightmare they only recommended 32 GB. That said, the Wyze app had no problem formatting the 64 GB card in my V2 camera.

I was just able to format a 128gb Sandisk and the app seems to recognize it.

Format the card to exfat.

Insert the card with the camera off.

Turn on the camera and app. It showed the card as valid with a tiny partition size. Tap the format button.

The camera will beep but the available size went down to zero. Hit format again and after the beep I got it to recognize the whole size.

That was basically my experience as well. It sure does take a big chunk of the card (9 gigs) for formatting though.

Also so people are not confused- After formatting to exFAT and then formatting again in the camera, if you then pull the card and put it into your computer, you will see that it’s now formatted to FAT32

It doesn’t take 9GB for formatting. It is that GB is ambiguous.

Just like U.S. Gallons and Imperial Gallons are not the same.

No need to format exFAT first. Just put the card in your camera and then format it. My 64 gig card shows a capacity of 59.56 GB after formatting.

Seems like larger capacity cards are working just fine. Has anyone had any TROUBLE with a larger SD card?

I have 7 WYZE cameras and I have 32gb SD cards in 3 of my cameras and 64gb SD cards in the other 4! So far so good! No issues. I use the camera to format them and they are working fine. I do notice the length of recording time is not that much longer than my 32gb cards on some of my cameras, however I know if is due to other factors described in other forum topics like the amount of “traffic” my camera sees and so on. I average about 8 days of recording on the 64gb cards. I get about 5 days on my 32gb cards. 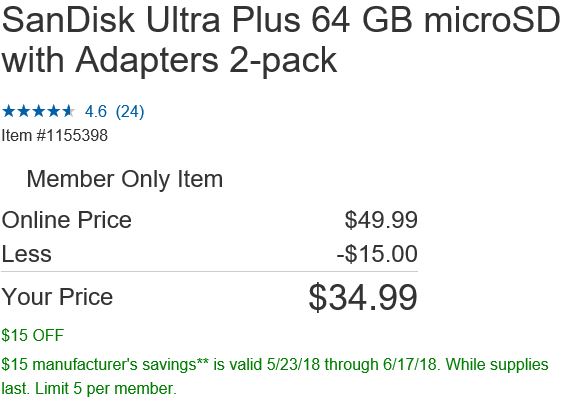 Thanks jaybro! That’s a great deal. Were you able to purchase them online and have them shipped to you?

Got them at my local Costco in Kennesaw, Ga. Online is says they are our of stock. Hope you have one near you!

Are you really comparing apples to apples? Did you replace the card in the same camera and use it in the same environment?

It’s a different environment. But I have used the 32 gb card in several cameras and only get 3 days if recording. The 64 gb always gets more than twice that amount. The wyzecam 32 GBGB card also says it can store 2 days if HD recording. I have continuous recording on. How many days of recording do other people get with their 64 gb cards?