Now that wyze v3 is out , I need ideas

Now that the v3 is out, I need some ideas on where and how to place them. I’m wondering if they will work with a light fixture outlet as well

Hello ygomez0721.
There are many posts addressing the powering of WYZE cameras via light fixtures. And some of the posts provide links to available hardware.
Below are some pictures of camera mounts. All of the pictured mounts are homemade (except one)
All of the pictures of homemade mounts are for V2 cameras but will accommodate the V3’s.
Also, there are many kinds of printed and manufactured mounts available through links provided in various posts. Most of these are for V2’s but V3 versions will be available soon if not already.
The forum has a lot of posts about hiding and painting cameras.
Internet searches will bring up many items (in time) to be used with your V3 cameras. 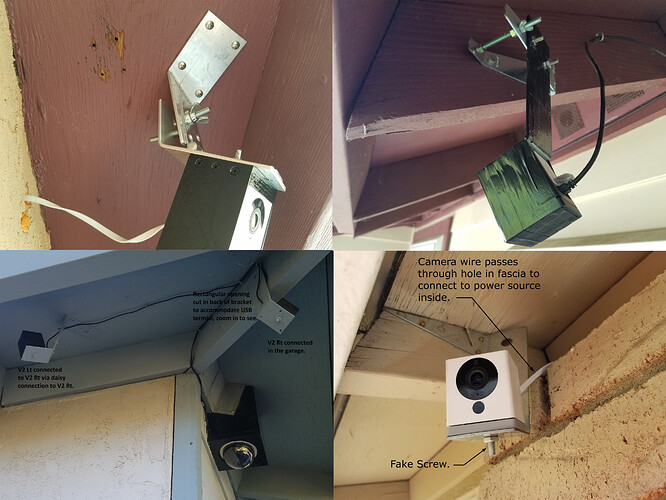 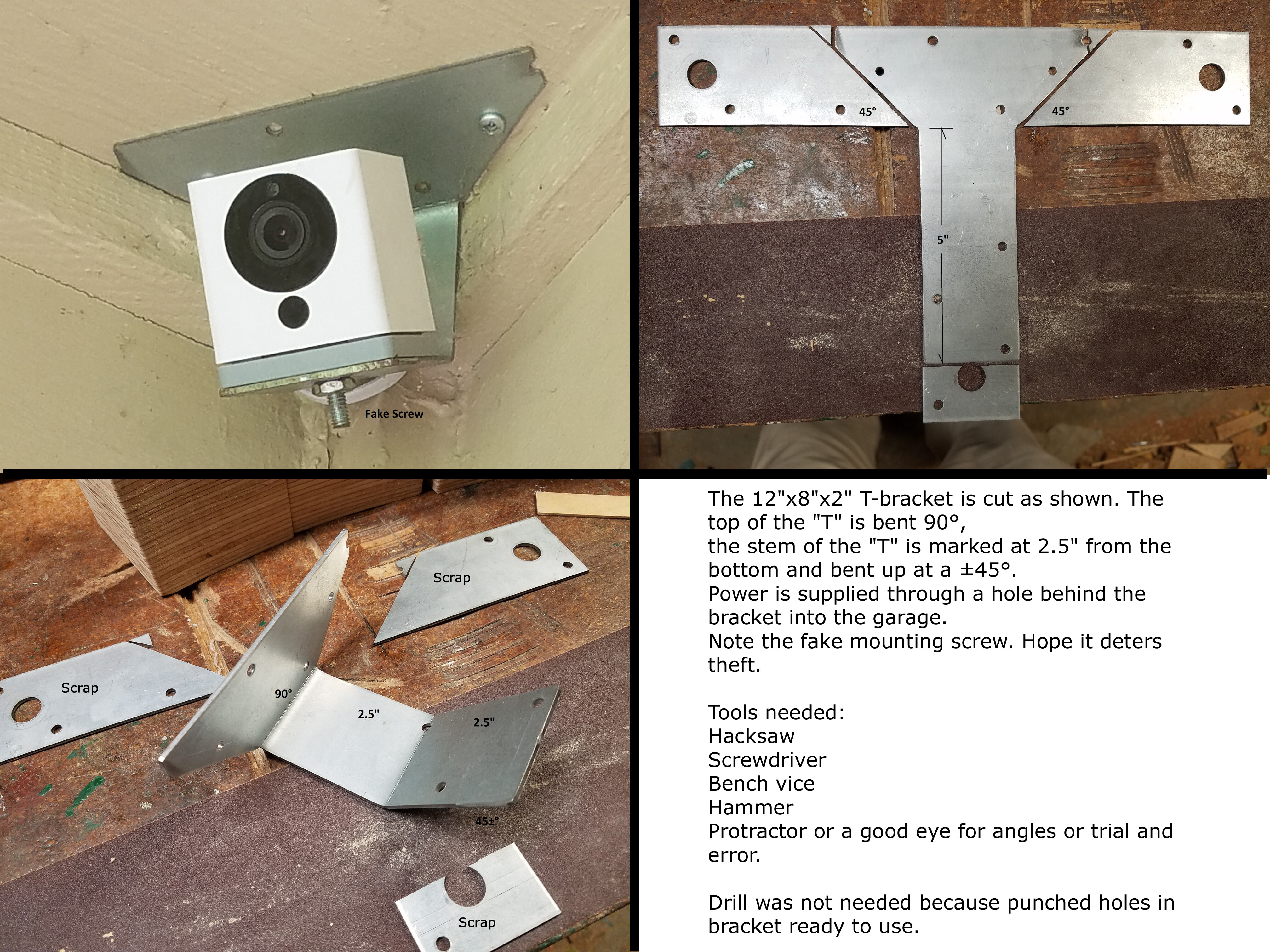 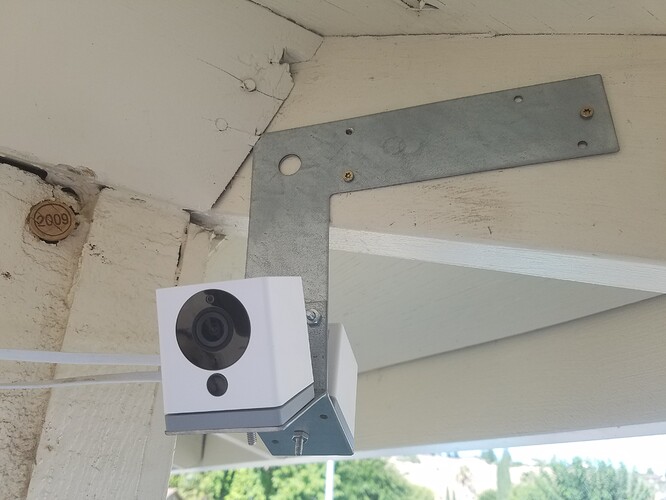 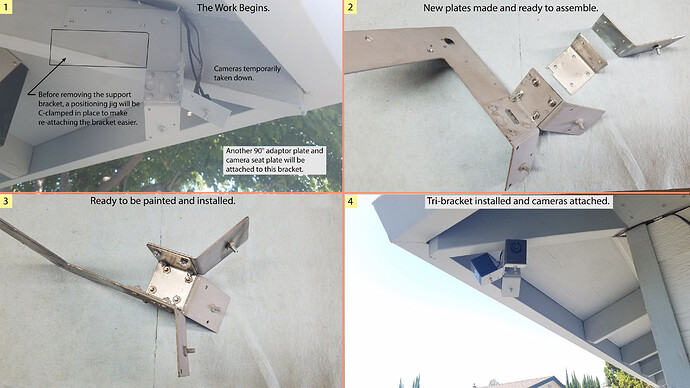 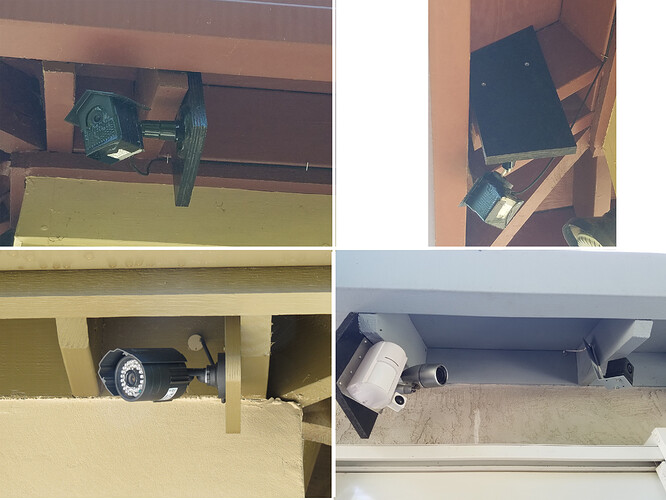 Do people not realize you can invert the image? lol so many akwardly made mounts to solve a software button.

Hello keegancdr.
I would think a lot of people know about 180° invert options in the cameras. I certainly do as in the pictures of post #2 there are two inverted cameras. He is a picture that includes an inverted camera: 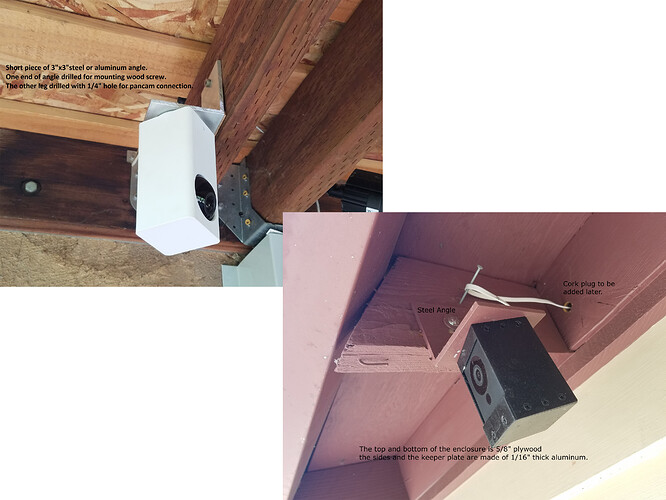 Angle 1-2 Mounts ed4032×3024 1.33 MB
I’m not sure what you mean by “awkwardly made mounts to solve a software button”. Every mount shown can accommodate and inverted camera. Some of the mounts would need some adjustment of their attachments to the structure.

The first two cameras pictured in post #2 are articulated mounts that can aim the cameras with simple adjustments. The very first camera mount shown, Is not pretty and has a cluttered appearance, and it was tough to make.

The second camera pictured only requires a strap hinge, a piece of two-inch steel banding, and a long enough bolt with some nuts. A close-up view shows how simple it is.

The remaining single-camera mounts only require one piece of metal in the form of an L-bracket or a T-bracket, and when cut and bent make a simple support that is hardly visible from a distance. These mounts are very resistant to loss of aim by bumping. In the following picture how many V2’s are there? 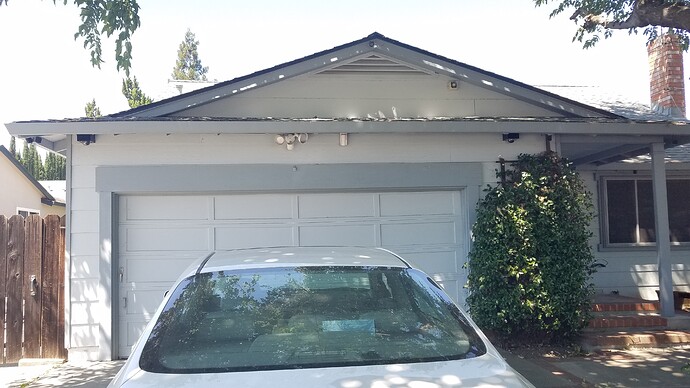 I have found for my situation that fixed-aim cameras are all that I need. Some of my old analog cctv cameras use swivel-ball aim adjustment, and can lose their aim when bumped by dusting or animals. My SWAAN analog cameras use an articulated knee joint with a radial splined grip. Very resistant to bumps. The mounts I made are very resistant to bumping-but can be re-aimed if needed.
Victor Maletic.

Yes but I was looking for a different kind of set up. Plug the camera to a light fixture with bulb. Like this to attach to

In posts, I have seen these kinds of lamps used to power V2’s. I think they drilled a hole in the back facing side to run the wire to the camera.

yes they will but You have to remember that WiFi only reaches so far to. Although Mine works in My garage about 75 to 80 feet away

thank you. I have spectrum and my own netgear wifi. so hopefully it will work, the door and the location is not that far; i just want it outside the front door and one above my garage.

Should be no problem

I like this bracket set up too. but how did you charge it? did you drill holes? that’s what I do not want to do, this is why I was looking at powering it up with the light fixture. I have seen bulb adapters that can use the bulb as well as it has an outlet to plug the charger. Just an idea, there are so many and I love seeing other people ideas

Hello, ygomez0721.
The power for some of my exterior-mounted V2’s come through holes in the exterior walls of my garage. The holes are only 9/16" in diameter big enough to pass the mico USB terminal end through. The hole is then plugged with a cork painted to match the wall’s color. The cork is also notched to accommodate the power cord. Inside of the garage, the power-adaptor end of the camera’s cord was connected to a regular extension cord that was in-tern plugged into a wall outlet. Later the extension cord was replaced with a hard-wired permanent extension of the wall plug. Drilling the hole in the wall is quite easy if the right drill bits are used. In stucco, drill a pilot-hole with a 3/16" diameter drill bit.
Then use a 9/16" diameter spade bit that has a wire pulling hole at the end of it. Drilling in a wood surface only requires the 9/16" spade bit. See previous posts:
Pulling WYZE cam wire through wall easy way

Put a cork in it. Keep it tidy and bug resistant

Below is a picture of an extension cord powered V2 from inside the garage. 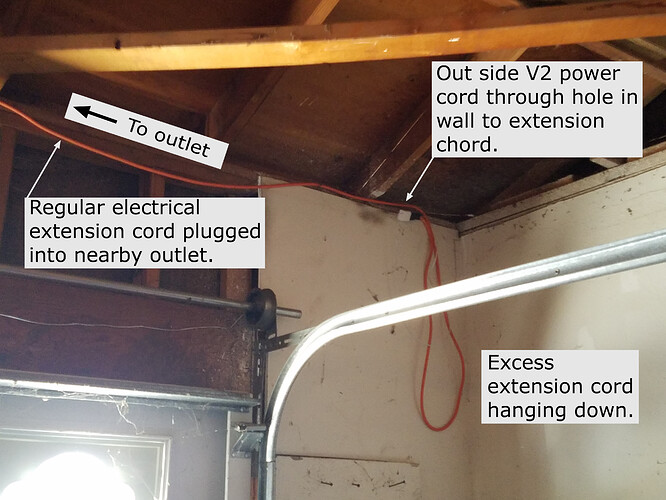 You have said you don’t want to drill holes in the wall and use your lights for powering your camera, maybe this could work for you? Your light fixture would have to be big enough to accommodate the ‘nyce lampcharger’ from Amazon or similar.

https://www.google.com/aclk?sa=L&ai=DChcSEwie39-ex73tAhXFCn0KHSoDCZ0YABACGgJwdg&sig=AOD64_3Y4UFxX7L1HgzzEZFpWA1iLInH2w&ctype=5&q=&ved=2ahUKEwi18Neex73tAhVTo54KHeUKAgYQ9aACegQIAxBF&adurl=
Next is how to get the wire from the lamp out to the camera, up the inside of the mantle, or out through a drilled hole on the base of the light fixture?

that’s what I wanted to hear. can you send a pic please? and what items did you use? i’ve seen like a bulb adapter of some sort with a power plug,

mmm. great question. If you drill, won’t that be a risk of water getting in? maybe just the first option but leave a little wiggle room of the cord so it won’t stretch so much.

but I’m wondering that myself

You will need 2 Outlet Boxes 2 outlets with the covers lastly 6 wire nuts to tie into the light wires & depending on how for You mount the boxes some wire. As I said earlier I put mine right next to the light boxes so I only needed a few feet of wire 3 or 4 feet. to Mount them You would need to drill a hole about 1/2 inch & a Jig Saw to cut out the square to mount the box. Then a screw driver Phillips to tighten the wires to the new outlets a Flat blade screw driver to mount the outlets to the box & the cover plate. I don’t have any picture but May be able to get some later if Your worried about water I wasn’t You can add a sealer around the box after You install it & tighten it down. The boxes have tabs that turn & lock it into place so it can not move once mounted. Once done all You can see is the outlet & cover because everything else is inside the wall. I would suggest right above or below the light if You try to go beside the light You could be on the other side of a Stud in the wall that the light fixture is mounted to. !/2 as much for just 1 outlet

That’s possible if You have room & much cheaper My lights had no room for the adapter since they are enclosed. You could also Use a Raceway outlet then all You would need is the wire & wire nuts it comes with everything & You don’t have to cut a big square just a hole about 5/8 of an inch & seal around the hole. they also have outlets with USB which is what I used.

In response to post #14, I think hole in a surface that is subjected to direct or wind blown rain should be caulked, sealed or shielded by some means.

I found at Walmart a bulb adapter with two outlets on the side that I’m gonna try. there are some people using that,