Mine sounds like a baby breathing heavily with slight static (in silent rooms). Comparing to my nest and baby cameras, they do not have static issues in same room.

OMG. That’s very similar to the noise I’m hearing when listening to my new Cam v3s. That’s horrible. Both of my cams sound like that no matter how silent the environment is or where I place the cams.

I’m annoyed by people who suggest that expecting better sound than the noise produced by these cams is expecting too much. I’m not expecting impeccable sound, but something a bit better than earsplitting grinding, clicking and distortion is not expecting much.

Why produce and sell a camera that promises functional sound, but is anything but?

My audio pretty much is useless on my brand new V3. I am using it for a sleep study and using other means for audio so i do not care too much but it would be nice to have some working audio. I was going to buy more of these for around the shop and offices but now that i know of this issue no way will i rely on them for anything that requires sound.

I’m now considering systems by Eufy and Lorex. They both have wireless systems that are fully functional without subscriptions.

Go on YouTube and search for LifeHackster. He does the best reviews of these types of cameras. He really shows what works and what does not.

I just purchased a v3, have not received it yet, now I am worried. I will have to check the return policy if I have issues. This is so sad, I expected better CS than what I am reading here. I am so sorry you all have to deal with this

None of my V3’s have an issue with audio, see my previous posts and tests of audio in this thread.

This issue doesn’t affect everyone, My 16 V3’s all have usable audio, the V3 audio is slightly weaker than the V2’s.

When did you purchase your v3s? This could be a batch issue?

While you are fortunate in not having a problem, the following screenshots show that other people have been complaining online about Wyze Cam sound problems over the last few years and there are several threads on this forum where Wyze Cam owners have attempted to troubleshoot these issues to no avail. 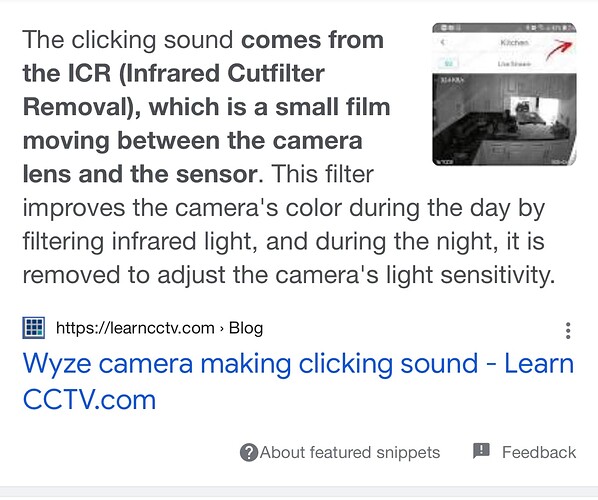 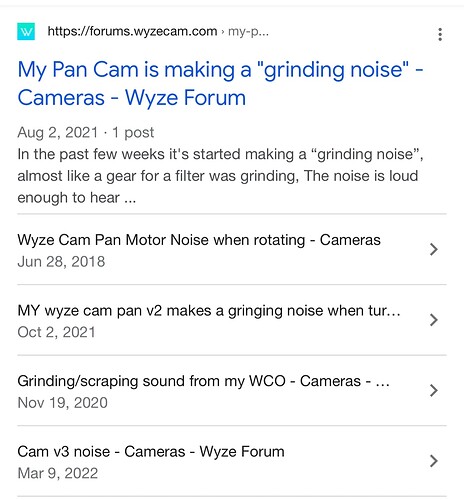 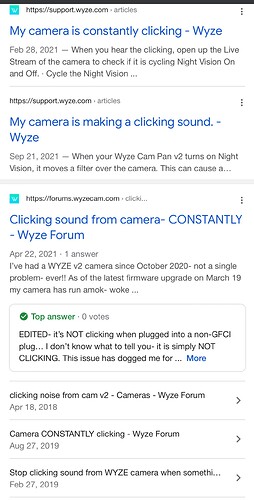 I ran across a possible explanation for what your camera might be manifesting. I’m attaching a screenshot of a clip below.

If you switch off Night Vision for that cam does the noise change?

This is what my Cam v3 has sounded like ever since I installed it two weeks ago. I have two cams and they both make the same non-stop rhythmic scraping sound.

Purchased my v3 in past month. The replacement unit arrived about a week ago.

I believe those having the “noisey audio” have something else contributing to that issue.

My neighbor has 12 V3 cams and their audio is good just like mine.

I will admit the audio is better (louder/clearer) on a V2 compared to a V3, but the V3 audio is still useable.

As far as the “Odd Noises” audio issue I have never ran across that in my dealings with several locations I’ve help setup Wyze V3 cams at.

I read one post that said the microphones were too powerful and to only listen at half volumn level. I tried it and could barely hear my wife talking to me from about 10 feet from the camera.
My wife thinks that I am crazy because sometimes it sounds like voices mixed in with the static running water noise. Weirdest thing is that it’s some kind of static all the time but voices only some of the time. I have tried everything that I can think of and read in these forums and the issue is still here. I have two Cam v3s. Both are the same. Indoors or outdoors.
PLEASE FIX THESE CAMERAS. IT CAUSES ME A LOT OF STRESS THINKING THAT SOMEONE IS TALKING JUST OUT OF RANGE OF THE CAMERA LENSE.

Yep. I think over sensitivity is part of the cam sound quality problem, but the background chatter I hear mixed in with the static is reminiscent of Poltergeist. I live in a quiet area. It’s not reasonable to assume those voices are being picked up by the cam’s ambient sound sensor. It seems apparent to me the voices and static are coming from electrical interference. Simply turning your volume down won’t fix that.

But the deal breaker on these cams for me was the constant grinding sound that overpowered any other sound when listening to the live feed. When I placed my ear near the rear grill of the cam, I could hear a constant crackling sound.

I reported all of that to Wyze support and they have notified me that the have sent replacement cams under the warranty.

(I also had two cam v3 spotlights that were dysfunctional and unusable from day one that they are sending replacements for, too.)

Good luck on yours. If you feel your cams are not performing as promised, I encourage you to contact Wyze support to seek a remedy at (206) 339-9646.

Not all V3’s have “strange noise” audio issues it seems, appears to only affect a small percentage of users.

Maybe it is their network, smartphone, other electrical interference who knows?

I have never experienced this issue at my location or any other locations I assisted in installing a V3 at.

It would be useful for those experiencing this phenomenon to try your V3 at another location with a different WiFi and a different smartphone to try and figure out what causes this. If the V3 works elsewhere then add back in one of the variables like the smartphone.

Can confirm it is not my wifi or smartphone as the issue,
My guess is there was (currently is) a batch that has faulty mics.

So do all your V3’s have the audio issue or just one?

So you tried them elsewhere on a different WiFi with different smartphone?

I agree. The two v3s I ordered in February both have the defect. The one v3 I ordered in March was free of that particular defect. I tried them all at different distances from the router. No change.

Those two cams emit a constant crackling sound that’s detectable when I place my ear near the cam’s rear grill.

I will be interested to see if the replacements Wyze is sending will be with or without that phenomenon.