So my plan has been to install Solar Motion Sensor Wall Lights Outside. However, I’ve discovered that the lights I already have that run dawn to dusk on my front porch and in my Garage cause a huge glare and make the cameras in those areas virtually worthless. The cameras I’m referring to are under a covered porch and a covered garage so I’m not using any of the third party covers on them. One camera is just mounted via the metal washer and magnet and the other is using a third-party mounting bracket.

Is there a trick on where to mount lights when these cameras are in use or am I just SOL and cannot mount cameras where lights are present?

Do you have a picture? Where are the lights in relation to the camera? I have one light that causes glare near one of my cams and I was able to tape some black cardboard to the side where it blocked the glare but didn’t interfere with the FOV of the camera.

One happens to be a Wyze Cam Pan in my garage the Pan is mounted on the left side of the door from my house about 10’ above the garage floor and the light is on the right next to the door about 7’ from the garage floor. The light doesn’t currently have a cover on it so perhaps that would fix the issue. I’ll have to buy a cover since the cover was missing when I purchased the home and I never replaced it. I could get something that’s frosted or something or even frost a mason jar and put it over the light. Thank you for answering that really helped begin to think this through.

I can try the same thing for the one on my front port. However that still doesn’t tell me if I’ll have issues if/when I install motion sensor lights. Like this one that I have one of to try first Amazon.com

I would try to position cams so that any lights are not directly hitting the lens of the camera. If you’ve ever seen a professional photographer they have hoods mounted on their lenses to block stray light from the sides. I don’t have a pan myself but would try to make something like in the attached picture if I was getting glare. 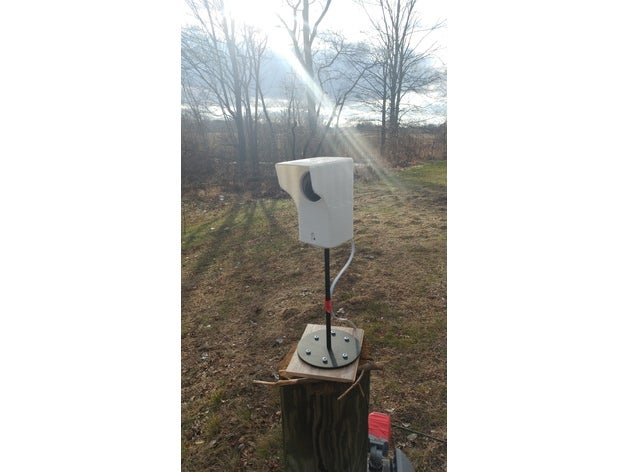 Thank you I think I have several ideas that will be cheap for me. to fix this issue. I much appreciate your response.

The way in the right situation the picture illustration would work well if the lights are above the cams but in my case the Cams are above the lights so I have to do that shade the camera from below but doesn’t interfere with the FOV.