New Wyze Cams. One has better image than the other?

I just bought my first Wyze cams. I got a 2-pack from Amazon. After getting them all set up I’ve found that one camera’s image quality is significantly worse than the other one. Yes, I removed the plastic protective covering from the lenses of both cams. They’re both also set to HD.

I tested them by setting them up in the same location then standing on the other side of the room and testing the live feed and also taking a pic of myself on the other side of the room. With the “good” camera my features are easy to make out. With the bad one, it’s not as clear and pretty fuzzy. If I were to ever have to give videos to the cops, the good cam would probably be good enough to ID the person. The bad cam would be questionable. Is there anything I can do to improve the focus on the one camera? Since I bought them as a 2-pack, I’d hate to return both of them just because one isn’t working well.

For now I’m going to use the good cam in the most important location and the bad one will be my secondary cam. And I guess for $20 I really shouldn’t complain that much but I really would like to get the best image quality I can.

I sometimes have problems with some of the cams dropping the bitrates pretty low and reducing the image quality. Is this happening on your worse cam? The bitrates can be seen in livestream mode.

Thanks. I did look at the bitrates and they seem the same. Over 100 for both.

Are the resolution settings on the cameras the same? HD vs SD vs 360?

Yes, both are set to HD. I even set them to HD and restarted them to make sure it was remembering the setting. After restarting, both showed they were in HD mode.

Does one of them appear “foggy” or just blurry? You can take apart the camera to address either issue, but it’s not exactly a cakewalk, especially if it’s foggy. Adjusting the focus wouldn’t be quite as intense, but still requires taking the camera apart. Just not taking it apart quite to the same extent.

Obviously, you’ve made sure the EXTERIOR of the lens is clean, right?

Sure. The one from 9:57 is the blurry one. If you zoom into my face you can see how blurry it is compared to the pic from the other camera. Ok, never mind. The app won’t let me upload or attach the pics to my post. But one camera is more blurry than the other. I’m not opposed to opening it up but wouldnt that void any warranty? 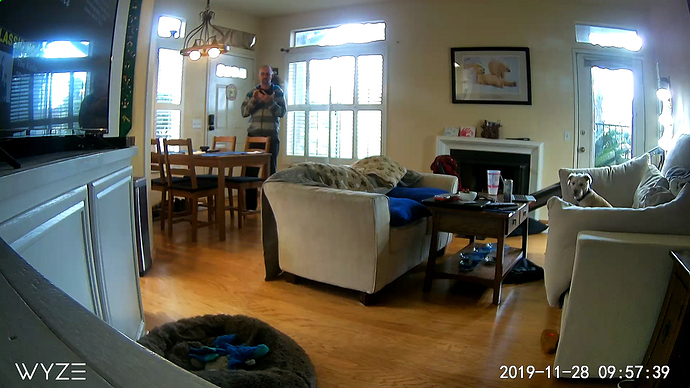 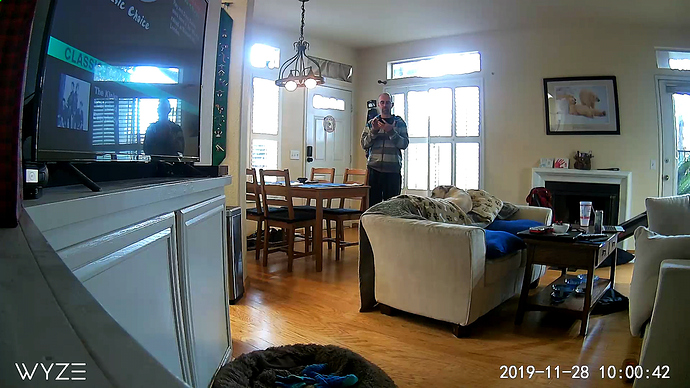 Oh, yeah, the forum limits your posting ability for the first day or two in order to avoid spam. I’ll tag the @moderators so that someone can upgrade your status.

Got it. The wyze app wouldnt let me upload them but I tried through chrome and it worked. Posting through the wyze app doesnt seem to work very well.

I’m not opposed to opening it up but wouldnt that void any warranty?

Probably so. I’m not really sure what Wyze would do if you broke the camera in this situation, to be honest. The scuzzy filter (or an unfocused lens) seems like a manufacturing flaw, so it seems like something that’s their issue, and they can hardly fault you for trying to fix it. But yeah, I’m not sure.

Ah, I see them now. Yeah, the first one definitely seems like it needs a focus adjustment. That isn’t too difficult to do if you take apart the camera, although there’s some glue that keeps the lens in place. If you screw it with enough force the glue comes off easily enough though.

Like I said, I’m not sure about voiding the warranty in this situation. Since you’re trying to fix what is arguably a manufacturing flaw, I feel like Wyze comes out ahead if you want to try that instead of returning the camera. But if you’d rather not take the camera apart, you could open a support ticket. What would you suggest in this situation, @WyzeGwendolyn?

I know what you mean. I have 4 V2s and 2 Pans. All are great except 1 of the V2s is very pixelated. I’ve tried moving it closer to my router, I’ve even tried switching power cables… nothing works. Even the green box that tracks movement is terribly pixelated.

Your issue sounds more like a resolution issue, rather than the lens. Did you accidentally switch it to SD mode?

No it’s on HD. I switched it to SD and back to HD to make sure but it is the same result. It acts like a bitrate issue, but the connection is strong and bitrate is equal to the others. Been stumped on this one for a while.

I would recommend that @GuitarMan and @mbrindle both contact the support team before opening up cameras.

After contacting Wyze support and going through a couple of troubleshooting steps, they are sending me a replacement camera.

I’m having the same problem with one of my pan cams. It’s so pixelated, you can barely tell a person is there compared to the other camera, which shows the person clearly.

Both cams are in HD and bitrate is always 100+ with my fiber optic service.

Should I contact support, also? Cams are only 6 months old, at most.

Yes, please contact customer support so we can help look into that. Have this been a change that happened over time?