I just got my first Wyze cam and Sensor Kit. I looked on the forum and saw that some other people attempted similar things to make a DIY lock sensor, but they seemed to be dependent on really thin door trim, which mine isn’t. Here’s what I did: 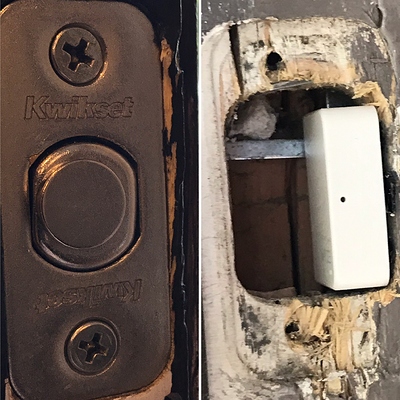 My doorframe was already kinda out-of-whack and someone in the distant past drilled on the deadbolt and latch plates way off-center in order to make the door close tightly. So in my case, I actually didn’t need to expand the hole at all. It fits in there perfectly, and the deadbolt doesn’t hit it. (Although I had to scrape off the mounting tape in order to give it enough clearance.) In your case, it’s more likely that your deadbolt plate is centered on the hole, so you’ll probably need to expand it, but it shouldn’t be very difficult. If you have a jigsaw or a drill or a chisel – or even just a flathead screwdriver and a hammer – you can do it. In my case, the depth was also perfect already, but your mileage may vary.

I put a 1/2" neodymium magnet onto the bolt itself. That seems to be the perfect size. (12-13mm if you’re using metric) For now, it’s just stuck to the deadbolt latch with magnetism, but I’ll probably put a dab of superglue on it in a day or two. (I want to make sure everything works as expected for a couple days, but so far, so good) I put the sensor into the deadbolt hole, with the flat side of the sensor facing inward, so that it’s furthest away from the magnet when the door is unlocked, and closest when it’s locked. (I assume that’s the side which is most sensitive to magnetism, since it’s the part that connects with the magnet end )

At first, the sensor didn’t trigger when I had the magnet on the bolt with the opposite facing out. But when I flipped the magnet over, it was perfect, so if you’re having issues, try that first. Rotation might make a difference, too. Basically, don’t superglue anything until you’re 100% sure you’ve got it right. You may even want to draw an “up” arrow on it with Sharpie or something, to make sure you glue it on correctly.

I haven’t put the deadbolt plate back on yet because I wanted to buy a better one anyway. Instead of a deadbolt plate, I’ll probably replace it with a T-Strike. A T-Strike generally isn’t necessary for a deadbolt, since a deadbolt doesn’t “latch” the way a doorknob does, but it won’t hurt anything and it will look better because it will cover the expanded hole. (I didn’t technically expand mine, but it was screwed on off-center enough that you could see the hole outside the plate anyway, even before I did this)

Anyway, good luck if anyone else gives this a shot. I’m going to do my back door, too, but I need to buy more sensors, and I’ll probably need to drill out the hole a little larger.

Edit: I posted it in a subsequent post, but I figured I should add the video up top for easy access:

@WyzeGwendolyn
Gwen,
This is an awesome hack. I’m tagging you on this so you’ll see it and consider @nerdland for the Wyze Award of the Month for the most innovative DIY application of Wyze kit.

What’s that, you say? There’s no such Award? Well, there should be. Clever Wyze customers are doing all sorts of cool things with cams and sensors and such. This one gets my vote for Hack of the Month

Thanks @kyphos! I need to buy some more sensors, but I’m going to do the same thing on my backdoor. My backdoor is newer, and the frame isn’t all out-of-whack like the front door, so I’ll need to make the hole larger.

It will probably be slightly more secure to place the Wyze sensor on the outside of the bolt rather than the inside. (So that the sensor doesn’t get smashed if someone kicks in your door) In the photo I posted, it’s on the inside, but that’s just because the hole was already large enough and that’s where I had extra room. The only drawback of placing it on the outside of the bolt is that it may be tougher to cover the expanded hole with a plate. If you expand it toward the inside, a normal T-plate can cover the expanded hole. Not sure which I’ll do, but I’ll post an update here after I do it. The photos of the backdoor lock should look prettier.

8885-bn600×600 66.8 KB
That’s the kind of plate I’m talking about. (The kind usually used on the knob/latch instead of a deadbolt) If the hole is expanded toward the front, the strike portion will cover it.

Just be careful to buy one with a square-ish opening instead of a half-circle, so that your bolt will fit through it.

Another potential solution is to expand the hole UPWARD, and buy one of the longer plates that extends further above and below.

Very nice! I like the idea of the T-plate, except that it places the sensor ‘in the line of fire’ (i.e., if the door gets forced). However, if the door did get forced (thus damaging the jamb, etc etc), the cost of replacing the sensor is in the noise.

My concern wasn’t really about the sensor itself, but the fact that if it gets smashed, it wouldn’t send the alert. But now that I think about it, that’s probably a non-issue, because I also have a sensor on the door. If my door should be locked, and it gets opened, that obviously means it’s unlocked. The lock sensor is really more just for my use, to check whether I remembered to lock the door. And you’re right, if someone kicks in my door, the $5 replacement sensor isn’t my biggest concern. Haha.

Very cool application.
Is the sensor placed such that if the door was body-slammed-forced open the extended bolt will not crush the sensor? Mounted on the non-crush side of the bolt, the sensor can remain functional and send a notification.
Victor Maletic

Right now, it WOULD be crushed in that scenario. That’s what I was talking about. But I have another sensor on the same door to detect whether the door is open/closed, so it probably doesn’t matter much. If the door is open when it shouldn’t be, I’ll know I have a problem.

Assuming you’re working with an inswing door, (as nearly every exterior home door is) extending the hole toward the outside instead of the inside would alleviate this issue, but it may be more difficult to cover the hole with a plate if it goes toward the outside. There are plenty of plates that go inside or up/down from the bolt hole, but there aren’t really any that go backward from it.

You have it covered.
Thank you.

WOW! This is so awesome! I’m going to share your cool hack with the team. Thanks for the post and the detailed instructions, @nerdland!

@kyphos, I greatly appreciate you tagging me in here.

Glad you like it! Feel free to send some more contact sensors my way and I’ll be happy to tinker some more.

I just got a T-strike plate to put back over it, and my first problem became apparent – the magnet likes the strike plate a lot more than it likes the deadbolt, so when I close the door, it jumps over to the strike plate. I removed the plate again and superglued the magnet. (DEFINITELY be sure to test that it’s in the optimal place before you superglue it. I marked mine with an “up” arrow, and I also determined that it worked best with the magnet toward the top of the bolt.

I’ll let it sit there overnight so that the glue has a chance to completely cure. If it still jumps over to the strike plate after that, I’ll probably drill a shallow hole into the bolt, so that the magnet can be “seated” in the bolt.

Sweet! Please let us know the results. We’re very interested and I’m sharing this with the team!

Looking forward to it.

If it still jumps over to the strike plate after that, I’ll probably drill a shallow hole into the bolt, so that the magnet can be “seated” in the bolt.

If you seat the magnet in a shallow hole, you may find that the sensor won’t (reliably) detect the magnet. When these flat magnets are recessed, the pattern of magnetic flux lines are changed significantly. The surrounding metal ‘collar’ focuses the flux, and might direct it away from the sensor enough to impact detection. No way to know without a little experimentation. Good luck!

I superglued the magnet and I put the plate over the hole, and everything is working as expected. I didn’t need to seat the magnet, but if the superglue eventually fails, I may revisit it. FYI for anyone who tries this, the rotation of the magnet is VERY important. Once you find the correct rotation, be sure to mark the magnet before you superglue it to your bolt. (The supergluing seems to be necessary, unless you can find a strike plate made of a non-magnetic metal. I couldn’t.) It’s also important that magnet is aligned at the right height relative to the sensor. Just be sure to test everything before you make it permanent. I’ll make a video to show this working.

Made a video demonstration. My Wyze Smart-ish Lock Demonstration - YouTube

Thanks for a clever idea and a good explanation. Most people probably know this, but while you are at it, you might want to reinforce the door jam. As you know the door jam is just a 1x4 piece of pine and is usually shimmed out on that side. IF you are lucky next is 2 2x4s. Along with 3-4" screws thru the “plate” I place a piece of steel/alum about 4" x15" on the inside of the door frame, behind the sheetrock that reinforces the door frame and stretches over to the 2x4s. Put a number of 3" screws thru the metal plate into the door frame and the 2x4s. Use some spackle if needed. You door trim will be back to normal. It should slow down the “kicking in your door” giving you a warning if you happen to be at home.

I agree 100% I wouldn’t recommend you go hogging out a bunch of material from your door casing , where your dead Bolt is, unless you going to reinforce it

Fair point. Although the amount of wood on the frame between the bolt hole and the inside of the door is generally very little already. Certainly not enough to stand up to much of a blow. That’s the whole point of the strike plate. The plate is metal, and you generally screw it deep into the frame. Some of the “security” plates even have extra screw holes so that you can reinforce it even more, and they’re extra long at the top and bottom.

A strike plate doesn’t really reinforce your door casing, from a forced entry and a standard door lock set only comes with 3/4" screws.
I’m just saying for the general public don’t go hacking out your door frame unless you plan to reinforce it in some way.
The statement from the previous poster saying most people probably know this , I don’t think is an accurate statement, I would say only some people know this, not most