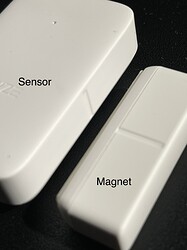 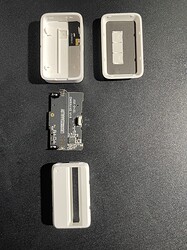 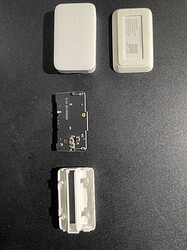 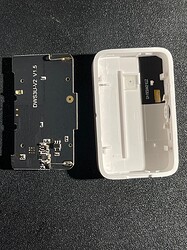 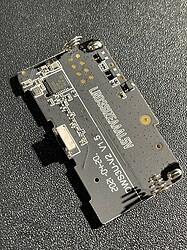 Interesting there is a rubber seal on the inner casing which would indicate there is a little moisture resistance, but still not rated to be outdoors per Wyze. 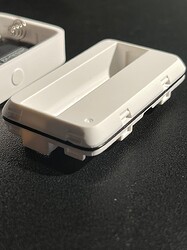 Went looking for what the magnet was attracted to well, its the battery 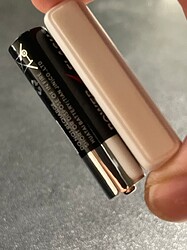 Which is why there is a big plastic piece on the inner mold to block the opposite side from the battery so there is no attraction. 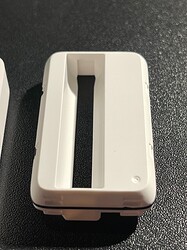 If you have any questions about the insides, please feel free to ask. I did put it all back together and it functioned properly.
Tagged @spamoni4 @carverofchoice @Newshound @dr.know (cause I know you all like this stuff)

Was a little disappointed not finding a dry reed switch to connect other stuff. Hall effect = less cost.

Really what had me wanting to open this thing up. I was a bit suprised myself.

Nice work! When I have time I enjoy dissecting things ( mechanical and electronic) also.

Hmm so clearly the only reason it’s as big as it is is in order to contain the better battery.

Interesting. Thanks for the tag.

I wonder what the magnetic threshold is to determine open or closed. Reason:

I have a non-standard door that is more like a gate that is latched closed by a hook that allows the door to still fluctuate forward or backward an inch or so each way before the hook stops it opening all the way in either direction unless the hook is removed. In this situation, the contact sensor is hard to set up for this door because the “closed” position Has a dynamic “range” instead of a static “position”. So I tried to get some of that magnetic tape stuff (similar to those flat fridge magnets that have emergency info or some company’s info all over them) and thought maybe I could cover a large area with magnetic tape so it would always show closed anywhere in that whole long zone, and open only when it leaves that range. But sadly magnetic tape is way too weak to trigger anything even when touching the sensor directly.

Back to the drawing board. To figure out how to know when my door is open or closed… Might have to line up a string of neodymium magnets or wait until we’re able to use a camera and train the AI to recognize the different condition.

I like the neodymium magnet, maybe one big one. Here is a spitball, mount the sensor on a ferrous metal tab which pivots to align w/magnetic flux.
-or- Mount the magnet on top of the hook and the sensor above the eyelet.

I’ll have to see if there is a way to do that. The hook is really small, and my teenager is not very careful either… Would need to make sure it would all be really secure and still convenient. It is a good idea though. I hadn’t considered that possibility. Might also be able to do it in reverse… When the hook is hanging down on the wall and not in the door, it closes the sensor, and assumes the door is open, and when it’s in the eyelet on the door, (not hanging) them the door is closed. Hmm, I’ll have to look into the feasibility of those options since my magnetic tape idea was a bust. Thanks for the idea.

Since the hinge side doesn’t move as much, maybe someting on that side of the problem.

Don’t forget about me.
Victor.

carverofchoice, maybe a strong bar or disc magnet fixed to a steel strip of suitable size.

Ah yes, victor is a very detail-oriented modification-loving guy too for sure.

About the magnet fixed to a steel strip, that’s a good idea to test. If I put something like that along the path of where it will move at the top if the magnet is strong enough…and it should be something easy to test. I might not need a full solid line of magnets if that works right. Maybe just one or two depending.

I think putting something on the hook itself is out. The hook has a locking slide on it (that my wife wants to lock it better sometimes), and it’s less than 2 inches long, and a very thin diameter. 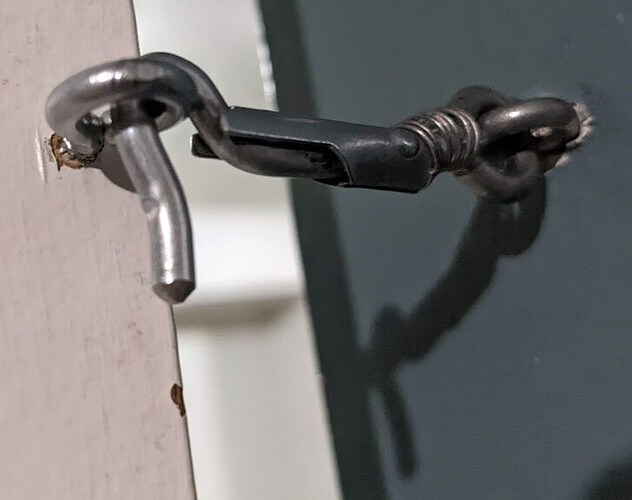 Anyway, R.Good saved me some good time from dissecting one myself to see if my original modification idea for this was a possibility.

Back up a little and let’s see the door.
Could you stack magnets? I have to believe you have some V1 sensors hanging around still with those magnets, they work with the V2 sensors. I’ve used them in a couple of places. Could you fill the 1 inch swing with the left over v1 magnets? 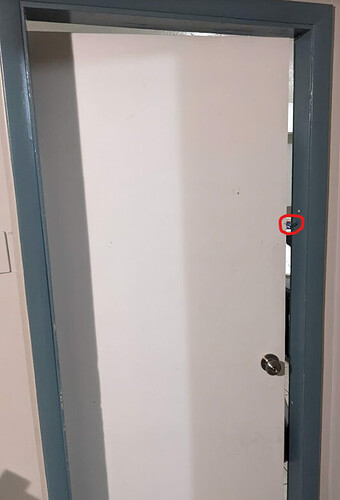 Uhhh, now that we can see it… could you perhaps just rework the door and put it onto standard hinges? It looks like a pretty normal door frame and you already have a handle and latch…

LOL I knew this would come up…we will do that eventually. This door is ACTUALLY attached to the pantry, which is just inside that doorway and to the left…and the doorway leading into this second kitchen had no door. So my wife opened the pantry door and hooks it in place to block certain individuals from going in the kitchen…(pets and munchkins)

Yes, giving it it’s OWN door would be the ultimate goal and best solution, but the wife wanted to set it up like this for now…so…happy wife, happy life and all that, you know? So, given what the wife wants done in this situation for now, I am just working around it! LOL

This is why I avoided showing the whole door before now, because I know it looks weird and seems weird and the obvious answer is “put in a normal real door” but that is not CURRENTLY an option

I just need a sensor solution for what IS, rather than what SHOULD BE and eventually will be

Since temporary, I go back to my stack idea just different thought… makeshift holder at the top attached to the frame with stacked magnets, sensor on the door.

I know it looks like a 3 year old drew this but I have big fingers on a cell phone drawing app, lol.

Okay, right next to the pantry and a mostly useless doorway. You have no idea how strongly you smell of imminent kitchen remodeling. That whole area is aching for a sledgehammer. Stay away from the cable TV channels.

That whole area is aching for a sledgehammer

That is the idea. We only plan to live in this house for roughly 3-4 years until our daughter finishes high school and we will be remodeling a lot of it, including the 2 kitchens…hence why we’re not going to do a permanent solution now, only to destroy and redo it a second time later with something different and more long term. Then in 3-4 years we will sell and move into more of our dream home. So there are some good reasons for a temporary makeshift solution for now. I don’t know what priority level this spot will get, so that “Temporary” may be short or long depending on what all else is remodeled first, but at some point it will change…we don’t see a big point in paying for a nice door there until we are ready to fix everything else near it permanently too.

So there are some decent rationales for why it is currently this way.