Does anyone else feel that sense is much more accurate and a better trigger than motion sensor. I have zero issues with my 3 sense devices triggering etc… But my motion sensors give me fits constantly. I have a sense 2 ft from a motion sensor. The sense shows 3 bars and the motion shows 1. The other motion shows 1 also and it’s 10 feet from either of the other two. Motion sensors fit my needs very well but need them to work. And you can’t do FW updates to sensors so they are what they are. Hoping for a motion sensor v2 that’s much better. So, am I the only one with this issue? I did everything support said and still no better. Thanks for any and all suggestions and help.

This isn’t clear. Are you comparing sense contact sensor and sense motion sensor?

Or a camera motion detector and sense motion sensor?

Sense contact and sense motion detector. I said you couldn’t update FW so I thought I was being clear. You can update FW on cams. And personally I think it was pretty clear. I never once mentioned cameras. I said motion sensors. Sorry I didn’t say SENSE motion sensors.

With the motion sensors to get a strong connection signal I had to rotate the motion sensor a quarter turn and check each time witch give me the strongest signal.
I used a plastic tube to limit the detection angle to prevent false trips or a sort.

You got a pick? I’d be interested to see exactly how you did it. Thanks for the tip

There’s been no motion in that room for approximately 20 minutes and the sense motion sensor is still saying motion so I believe I had a defective motion sensor. And sent a support ticket and went through all of the steps that they told me to go through and they didn’t do anything. So I replied to them about that and I’m waiting for their reply

Scroll down to see my posts.

Because of this I virtually turned off motion detect on the cam associated with the bridge/sensors.
Finding and setting the area that has minimum false trips in the detection zone of the cam with the least false trips.
Letting the benefit of the motion sensors I placed at strategic locations do it’s job… Sir.

In return this has minimized my false tripping notifications greatly…

Here are my settings for the cam with the bridge 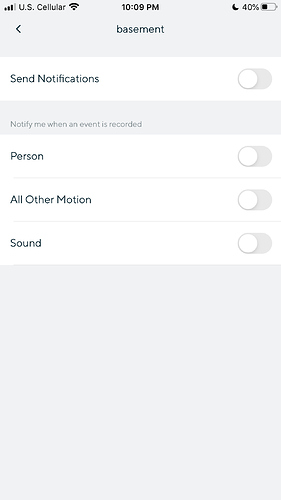 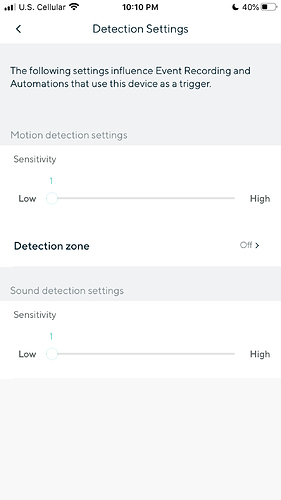 Lots of things give off IR, not just people. Any transient sources of heat in that room? Heater vent and the like?

Heat vent on floor about 4-5 diagonal from sensor. Here’s the thing. It worked properly for 2 weeks. Then this all started 4 days ago.

It’s still showing motion since 9:52. Absolutely no movement in there. It’s the mud room between hall and garage. Both doors shut. No lights on in garage or hallway. Just trying to give as much info as possible to come up with a solution. But like I said before I think it’s went bad for whatever reason.

May I ask why you think the cam and not the sensor itself? With 1 sense motion sensor and 3 sense contact sensors all working fine to me it points to the 1 sensor not working ?

I’d delete and or replace the sensor and see if it makes any difference …
Process of elimination.

Yes there is. Two rules:

I believe my sense motion sensor is bad. I did all the trouble shooting they suggested. I also deleted the sensor and rules and re added them. I replaced the battery. What else? My other motion sensor works fine and all my sense devices work fine.

This is what I’m getting in a closed room. 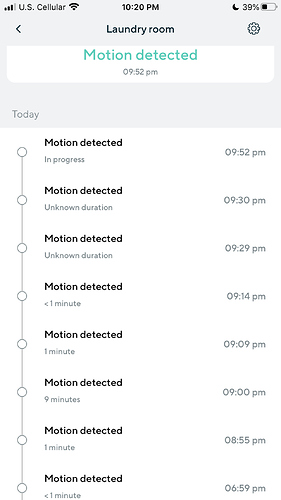 A maximum effort reset would involve:

That’s all I can think of to try at this point.

Also with a couple of my motion sensors I rotated them 90 degrees at a time and recheck the signal strength.
They went from 1 bar to 3, if I remember correctly the right side of the motion senor faced towards the bridge gave me a 3 bar.

hum, … also I’m assuming you check on spiders and bugs?