I’m having a problem with motion sensors triggering and showing movement in the app but it doesn’t get logged and it doesn’t activate lights like it supposed to. Last logged event was 2 days ago and it was turning on the lights just fine. Similar to the outage that we had about a week ago.

I’m having the same problem.

Don’t think you can do anything I only have one motion sensor so I would be interested in knowing if you have more than one with a problem. I have six door sensors and they all work fine

I’m only using the one at the moment.

I changed it’s battery 3-4 days ago. After multiple cameras reboots, I ended up deleting and re-adding the sensor in the app and pairing it with the sensor bridge again. Finally it started working.

Today I noticed that the sensor log only had a couple records from yesterday, but I keep getting notifications.

Since I don’t see many people reacting to this I think this is a sensor problem. I will call tomorrow and see if I can get a replacement.

My battery says normal but this sensor is pretty old and I don’t think I ever changed it. So might give that a try

The sensor was showing online in the app, but didn’t register the door opening and closing. It seemed completely dead. I didn’t have a spare battery but I did have the 2nd sensor the pack came with which I had never installed. So I took the battery out of that one and put it in the sensor I have been using. So the “new” battery may be low as well. I should order some new batteries to test it.

I have never seen a low battery icon, notifications or light indication. Like I said, I replaced the battery because the sensor was dead. At least now it triggers the events.

Are you talking about door sensors I’m having problems with a pir motion sensor. But seems like we might be on to something with the battery

I’ve seen this on both the motion and contact sensors. Sometimes when the battery is dying it pops up a ton of alerts, and other times none pop up at all, the sensor says online, everything looks fine in the app, but replacing the battery makes it start responding again.

Thanks will give it a try tomorrow

I just re-read your post, I completely missed that you wrote motion sensor! Sorry for the confusion, I am having problems with the door sensor.

It does sound like the same problem though, Hopefully @speadie is right and it’s just the batteries that need replacing.

There must have been some sort of outage. I wasn’t getting motion sensor triggers this evening. Not sure how long it’s been going on, but it just started working within the last hour with no action on my part. Checking the logs for my motion sensors shows no detection and no triggered actions even though they are working correctly now. Contact sensors are working and have logged events.

Just checked mine it still senses motion and triggers the camera to record but there is no record of it in the log and it still doesn’t turn on the garage light thru alexa which it always did. 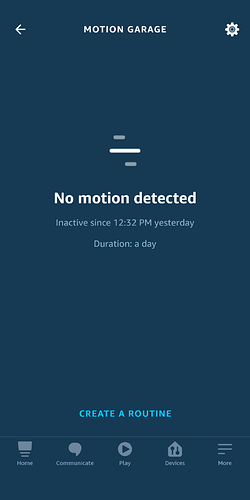 Screenshot_20210101-213738864×1728 55.2 KB
alexa hasn’t seen any motion detection on the sensor since yesterday per screen shot. If I run the alexa routine manually then the lights come on and alexa announces motion in the garage. So the routine is working but getting no trigger from the sensor
Rubycat January 2, 2021, 2:52pm #16

I’m having similar problems with the sense motion detector. In my case, I have Alexa announce when the motion detector is triggered. This is not happening since more than a day ago. I had a spare, unused motion detector that I hooked up and although it successfully announced motion the first time I tried it, it never did again.
EDITED TO ADD: Alexa does continue to work with a test door sensor I have so the problem of Alexa not announcing is only with the motion sensor.

I put a new battery in that was tested at 3.38 volts and the one I took out was at 3.03 volts. Replacing the battery didn’t fix my problem so I deleted it and reconnected it and it now works. Don’t know if it was the battery but it works so I’m happy. Thanks
UPDATE it worked only once still broken

With my motion sensor, notifications still work as does video recording. The only thing not working is the Alexa announcement. This is driving me crazy because I really need it to work–it’s on a cat door and I need to hear the announcement in case it’s not a cat coming through the door.

I just did the same thing–put in a new battery then deleted then re-added the device and…nothing…no Alexa announcement.