Motion Grid Off by Itself

Out of the blue several of my V3 motion grids have turned off. I’ve tried to set them up again but it’s not showing the vide feed on that page. Come on Wyze fix your software!

The latest app update has introduced a glitch that caused this. It has been reported:

And it has been acknowledged by Wyze:

Hi Gyzmo, I have found the issue as well. Let me report it to the dev team to fix it ASAP. Thanks, Xiaolong Chen

Does Wyze ever actually test updates before releasing them? Because it seems like every “update” causes issues.

I am having problems since Saturday that when I go into detection zone to try and squeeze detection zone down so trees are not triggering it 100 times a day it just sits there spinning - is this the problem you are all talking about? See attachment. I have tried restarting and shutting power off and restarting them. All on cam plus and have been for months.

Edit - Actually it just started somewhat working if I leave it sitting there spinning for 5 to 6 minutes. That long is not acceptable though.

Edit - I lied. Now all of them are are not working again. 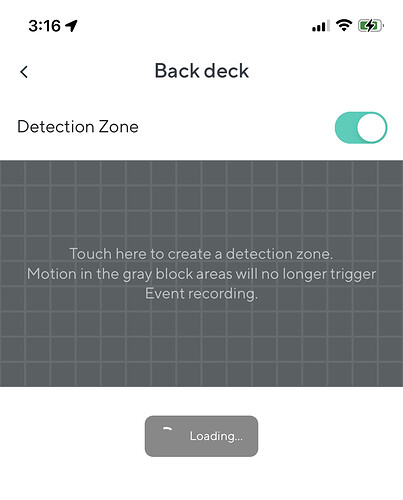 +1 for you for discovering this mitigation trick.
-1 for Wyze for not even performing basic testing on iOS - we’re talking just trying all app pages.

They’re having serious software issues lately.
I hope the company direction is aware of these recent regressions.

This seems to affect iPhones, and not Android phones.