Currently, I get a Wyze notification of motion on a camera and when I look at my watch (Samsung Galaxy 4) I can immediately read what camera gave the notification and what the notification was (like pet or person detected) but then I have to scroll down to see the thumbnail picture. This is kind of a pain. BUT, if you had the picture displayed first with the text under it, via the thumbnail I could see what camera it was and see what’s in the picture thus making it unnecessary to scroll down to read the text. Seems like a brilliant idea to me. LOL
Here’s an example. I can see the top portion of the thumbnail pic but have to scroll to see the rest of it. If you showed the pic first, rarely ever would anybody need to scroll to see the text. 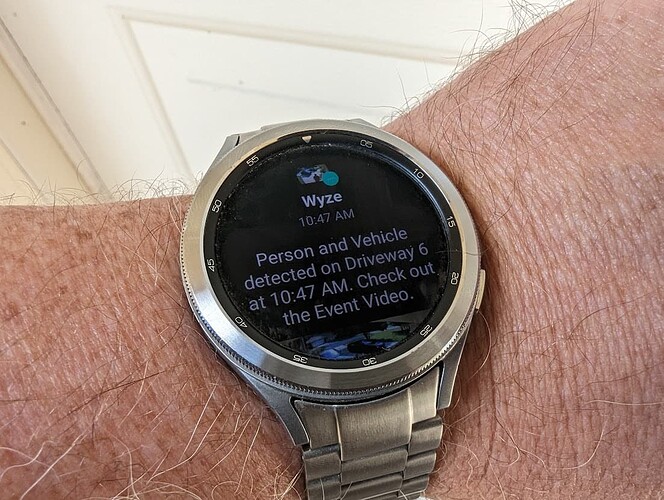 Here is an example of how you do it on an Apple watch and it makes more sense I think! 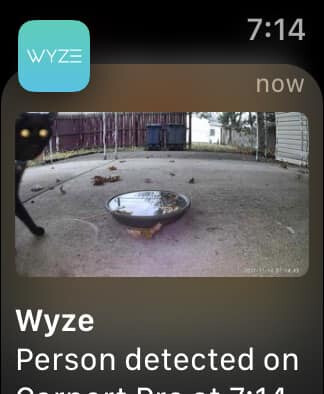 I approved your request, but I don’t think Wyze has control of how the notification data is displayed on a peripheral linked to your phone/tablet. It’s most likely the notification handler on the watch that needs to change.

I just learned that I think you are correct. HOWEVER, what I think happens is that the phone just pushes the notification to the watch. Thus, if the picture was put first for the Wyze app notification to the phone, then it would go first to the watch. So, just changing the order for the notification, period, would get to this end result. And, I can’t think of any reason why it would be “bad” to send the picture first for a phone notification. I’ll see if I can edit my original post to be a little more accurate. Thanks!

I don’t think the app is aware of receiving devices… it just pushes notifications per OS spec and the phone/tablet’s notification handler structures the notification to the sync’d end-device per API spec. That’s just a guess. But if true, and Wyze is able to switch text/graphic order, it may have the unintended consequence of also reversing Apple watch notification order. We’ll see if Wyze can work this request. When they review the new requests (monthly or quarterly) and determine feasibility, they’ll change this topic’s status to “researching”, “maybe-later” or “probably-not”. Wyze is swamped this time of year, so don’t expect a quick decision.