I heard a noise outside my home, and opened my Wyze App so I could view the camera feeds. HOWEVER, the Wyze App barraged me with multiple pop-up notifications, delaying my ability to view the camera streams. Consequently, I missed the real-time view of what was happening. BTW, I have no idea of what the Notifications were saying, I just dismissed them as quickly as I could.

This is not the first time this has happened…

I would prefer any of the following Notification delivery methods instead:

It’s hard to guess what’s going on without knowing what the notifications actually were. Next time it happens, it would be great if you could capture a couple screenshots and post here. That will give us more info.

I see from your profile that you are running the Wyze app on iOS. I have had a similar thing happen when I unlock my phone and all of a sudden I get a whole bunch of backlogged notifications (not just Wyze). This may be what you’re seeing.

I’m not sure exactly why that happens. It doesn’t happen all the time. I suspect in my case it may have something to do with the interaction between my phone and Apple Watch. Perhaps another Apple/iOS expert will chime in.

@JTG_NYC - not sure if this will help your problem or not, but you can control the’ backup’ of notifications by letting them come to the lock screen, setting them to Temporary or just having them appear as badges on the app icon. 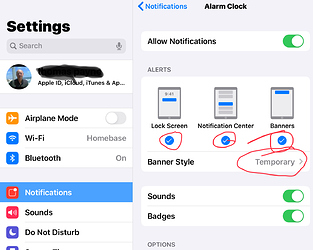 image1510×1205 381 KB
I like your suggestions. I recommend you go to the Wishlist, do a search to see if anyone else has suggested this. If not definitely make them and be sure to Vote for it.
For this part of the suggestions I’m assuming you mean a symbol on the Wyze app screen, not the device screen.

I too have an Apple Watch and I have seen this behavior when the watch was set to mirror notifications. I changed that to none on the phone and yes on the watch and that stopped those annoying pop ups in bulk from happening. Now I get my Wyze notifications (and others) On my watch and not my phone. Not perfect but better than it was.

No, @Loki, what you describe is not what I am referring to. You are referring to the iOS “Notification Center” that also displays on the Lock Screen…

What I am referring to is when the Wyze App is opened, and then you select a camera to view, these “boxy” pop-ups are displayed. Until this week, they were mostly alerts to upgrade the Firmware, but the ones I saw this week were some other kind of “FYI” notifications. As I mentioned above, I was in a hurry to see the live stream, so I dismissed them. There were 3 in a row, and I had to individually dismiss each one.

@tomp : Thank you for your suggestion, but that is not the issue. It is NOT notifications from the iOS Notifications Center. It is only when I am in the Wyze App, that the Wyze App pops these up.

@rbruceporter: I do not have an Apple Watch; your suggestions do not apply in this case, because the Pop-up Alerts I am seeing are only IN the Wyze App.

I wonder if you were getting the pop up notifications to review the app? I get those now and again in the app. But I have never received multiples.

There is a popup every time the app updates. A list of the new or fixed items.

True but usually not multiples of that either. It’s a head scratcher!

I have never gotten notifications thru the app itself-ie: Open the app and pop up windows appear inthe app screen- other than Firmware upgrade notices our policy updates. @Loki requested some screenshots of the notices but even a statement of exactly what they are notifying you of would be really useful!! Events, updates to firmware etc.
Thanks! I’m really intrigued.

I wonder if it was an spp update followed by a firmware request. It’s hard to ssy.

I do agree though, the firmware updates should be a notification within the app rather than popping up when you’re trying to view a camera.

Just noticed a post on Reddit, fellow up there claims he is getting repeated requests to agree to the new TOS. Wonder if it’s something related?

r/wyzecam - How to I stop getting this pop up, I have hit agree several times...