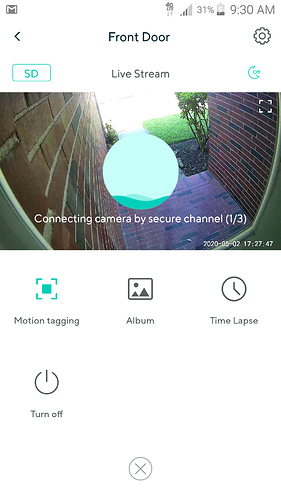 On iOS if something like that happens I force close the app which usually fixes it. You might give that a try?

yes, I have tried that many times and I also turn off my phone, boot up into recovery mode (home + volume up + power) and clear the partition cache several times, but it didn’t help.

do you have hardware acceleration ON.
try turn it off.

It was already off. 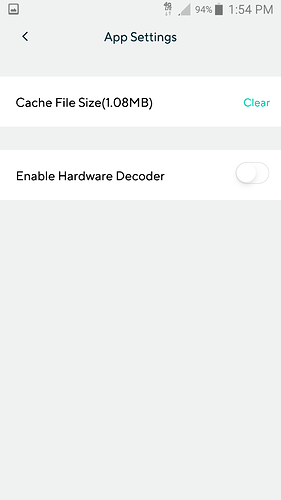 I did not see you mention that you have totally rebooted the cameras? Power off (unplug) and then restore power?

Cameras can still generate notifications and create events and still not connect without a full power off reboot. Some folks have even had to restart their router/modem. If you have already done so then I would say get a ticket open and see if you can get them replaced.

Hello, yes, I did unplug both cameras and wait at least 5 minutes then plug it back in but that doesn’t help. (Tried that 3 times already) I have not try to reboot my router. I’ll try that next.

I unplug my router wait for at least 5 minutes and plug it back in. I also unplug and both cams and wait for 5 minutes and plug it back in. I did wait to make sure router is back online and connected to the internet first before plug back in the cams. It did not help. I look on my router and did see those 2 cams connected on my WI-FI network using 2.4 ghz connection type.

If after doing that you still can’t get a live view on either camera I am out of ideas. Assuming of course your phone is connected with a solid network, same WiFi or cellular etc. And assuming all the settings on your phone are unchanged from when it last worked. You appear to have a genuine mystery.

Jiminy Christmss … to folks who suggest to reboot the router… STOP IT!

Can we regroup, folks.

If a device has an issue with WiFi connectivity… it’s because the DEVICE IS FAULTY.

I have 60-something devices on my WiFi network, and the ONLY devices that are FLAKEY are the Wyze cams.

Routers actually DO cause device connectivity issues for a number of reasons. Chief among them is the fact that a lot of the home router market, especially those running ISP supplied cheap router/modem combos, have issues when over 20-30 devices connect. Some older ones ( I am looking at you AT&T Uverse ) start to wig out at as low as 15 devices.

So it’s actually fairly good advice to reboot a router, especially when a large percentage of home users have never even seen the routers administration interface let alone know how to use it.

I think we missed my all important points

a) i have 60-something devices on my WiFi network

And if all devices on someone’s network work as expected EXCEPT for a specific brand of cam, I’d say with 99.99% certainty it’s THAT product.

I can speak on my behalf… reread (a) and (b) … the ONLY devices on my network that lose connectivity are the Wyze cams.

I’ve spent way more time than I should to tweak their position for minimize downtime.

But for us, these cams are only for entertainment purposes to check on the barn animals … but there are folks who think these are security cams, which they are not.

And many folks are being mislead into thinking their network is to blame.

The ONLY time I reboot the modem/router Is after some oddball AT&T glitch or maybe a storm that knocked power out.

I did not miss your point. I think you however may have missed mine.

I do agree that the Wyze devices tend to be the most problematic on the WiFi networks. That said NONE of my Wyze cameras disconnect or go offline or have any network issues. Apparently yours do?

My remarks ( and point) was that you cannot make a statement like you did that it could not be the router. Yes it can be. And it is in some cases. Is it in this case? I don’t know, but it certainly will not hurt to reboot it and see.

As a developer and long time IT professional I can tell you with 100% certainty that routers do and can cause a number of issues that can cause such symptoms. I can also say with equal certainty that bad devices or interference or environmental conditions can all cause the same types of issues.

As to what is causing this particular persons issue. I don’t know, so that’s why you try likely and some less likely methods to recover.

And I speak from facts. As you. I’m a software engineer and site reliability engineer of many years, so I’ve seen it all.

But my opinion is sustainable… if you have 20 devices on a network with no issue and let’s say, introduce two new devices, and they have connectivity issues. I’m confident where the issue is. : )

Speed has nothing to do with either reliability or stability.

I have 1 CamV2 and 2 CamPan, all three now fail to connect. I’m been working with tech support for 2 days now, tried all the accepted (power cycle, factory reset, etc.) and unusual (reboot router) “remedies”, none work. The camera is connected to the WIFI router but cannot connect to the App.

Hey if your happy with your conclusion and deductive reasoning I say more power to you. Every company I have ever worked at required more information than that.

But truly I am perfectly happy that you have unequivocally reached such a conclusion.

didn’t say speed will make it more reliable. Just FYI on what router I have. I have other devices connected to the router such as TV, PS4, Nintendo Switch and Laptop, those devices has no issue of losing connection nor it cannot connect.

As for the wyze cams , I don’t think it is a connection issue because I can see from the router those 2 cams are connected. I think the issue is the the last update version of App on the phone itself (may be the latest version of the app is not working well with the older Android 6.0.1 devices). It can not show the live stream video and it can not go into the cam itself view/change the cam settings.

True enough. Good luck with resolving your issue. It is truly frustrating to have issues like this and I share your pain.