Playback of video event clips from the 2x v3 cams I have are janky and have been for some time.

By janky, i mean, some sort of frame jumps/skips, duplicate frames, ghosting effect, strobe like effect ever couple seconds. Especially when there is motion.

Issue is not present on my old iPhone XR with iOS 15 as well or my old Pixel 3 with Android 12.

Issue has been present on stable app version and I just installed beta version from app store 2.25.21(1) and it still exists.

I am seeing the same thing on my iOS 12 Max and it only appears to be happening when playing back from the Wyze app. If you download the video the skipping goes away.

I have been discussing it in the Beta release thread and have made the Wyze team in that thread aware.

Nice! Thank You for the communication and the update. I have updated and the landscape rotation no longer crashed my iPhone 12 Max on iOS 15.1. I am also seeing some video glitching on almost all of my videos when viewing playback on my iPhone 12 Max, this started I wanna say 3 beta revs ago and is still happening today with the now build 4. Here is the video playback with the video Glitch in the Wyze App (you can see the car “bounce”) Downloaded Video using device native video pl… 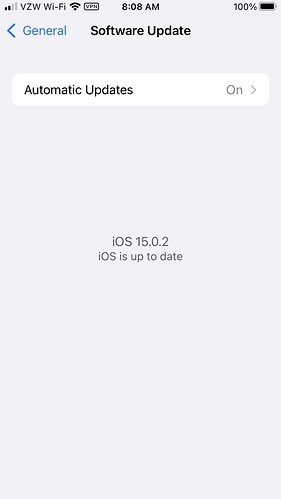 I started seeing something similar a couple of days ago.
When playing back events from my outdoor cam or video doorbell, there is a flash every few seconds like a frame from another part of the video showing at the wrong time.

Seems to be every clip from those two cameras, but not on either of my Wyze cam v2s.
Also downloaded the video and it played back normally, so it only seems to be playback within the Wyze app.

To reiterate, this has been a issue i have had for a while, I just keep for getting to come here and report it.

It started with when iOS 15.0 was released and installed on my 12 Pro Max, or just after that perhaps.

Wyze app video event playback did not have this issue before that.

But, there have been app updates and camera firmware updates since iOS 15.0 came out on Sept 20. So it maybe something in that and not iOS maybe.

my 12 pro max updated to iOS 15.1 few days ago and the Wyze event video playback is no longer janky. no idea if it was the iOS update, or a Wyze app update at or around the same time that fixed it.

Thanks. Updating now. It may be a moot point soon for me personally… Pixel 6 just came in. If it does well it may end up being my daily driver

@SpeedingCheetah I’m about to test that theory out when I update to iOS 15.1 in a minute. Right now I can reproduce the playback issue reliably on several videos.

Well ill be dipped. Just tested 20 videos with passing cars and they were smooth as silk.

Yep the issue is completely gone after the update to iOS 15.1