Is it possible for the door sensor to glitch?

Is it possible for a door sensor to glitch? And before I start, I’d appreciate if no one tells me what I “should” have done. Can’t change the past. The other day I was alone in the house. I went into my bedroom for about 10mins or so. When I came out I checked my phone and noticed that I got notifications for my door opening then shutting about 2mins later. The door was unlocked. Nothing was taken but I have a stalker so I’m concerned. Is it possible that it glitched or would the door actually have to have been opened and closed? I will be keeping everything locked tight from now on.

You didn’t say V1 or V2 sensor, but so far in my experience I’ve not seen either of those contact sensors misbehave. The only exception might be if another magnet gets involved (but that should make it look like the door is closed when it isn’t), or the sensor you use is barely in range of its magnet. I can ‘almost’ close my door and get close enough for the sensor to report the door is closed, but that’s about it for me.

The V2 sensors are on a Hub who’s firmware appears to still be a work still in process though, and I haven’t loaded the latest version.

Not to freak you out, but I hope you checked the rooms you don’t use afterwards!

Also don’t understand why you would leave the door unlocked under the circumstances you describe.

I did, thank you, this helps.

Why are you even on this forum dude? You’re clearly not here to help anyone or contribute. 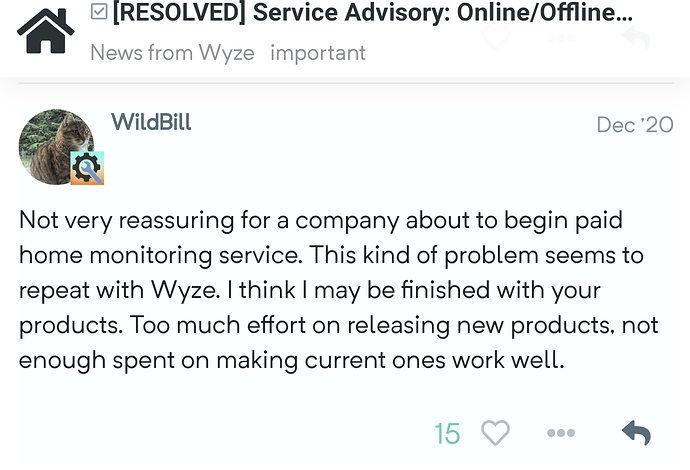 @WildBill says things that have to be said once in a while, but he is a positive influence.

Please accept my apology. I meant no disrespect and missed your line about not needing to be told what you should have done.

I’m concerned that there is too much reliance on Wyze products, especially the new home monitoring service which is still in its infancy and isn’t as reliable as it should be. I see that you just joined the forum…welcome. You should be aware though that up until a few months ago Wyze insisted it wasn’t a home security company and that its products shouldn’t be used that way. The HMS product is a 180 degree change for the company.