I have of those weird “orb-like videos did anyone ever say for sure what they are?

Those look like dust particles on air currents close to the lens.

I can’t get the video to play did you?

Yes, although the format is pretty raw – JVT/AVC encoding with A-Law audio. VLC can probably play it. My QuickTime & my Firefox browser played it. One of the orbs, top, slightly left of center: 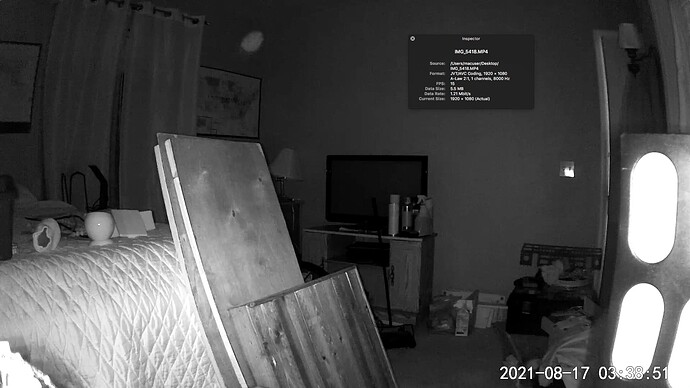 Oh wow that is so neat that you made the information appear like it’s displayed in the wall how cool! Anyways you think these are dust? Really? I tried to upload a different video which shows more of them but it was too long some of them move in a pattern like up and down like a swimming fish or in circles like a corkscrew and they just disappear but not always out of the view of the camera like they don’t go off screen they disappear in the middle of the screen it’s weird

I posted previously about this. They are particles of dust carried by a draft in the room. Try this : take a freshly laundered towel, go into that room at night, and give the towel a shake. The IR will pick up dust particles in the towel being released.

Flying insects I would say