How weather resistant are the V3 cameras really?

I have had one replaced because water got inside the man in lens and fogged it up. After months it never cleared.

Wyze thankfully replaced it without issue.

One of my other ones is now showing some signs of fogging up. It has been foggy in the middle of the image now for three days. Hopefully when we get some warm weather I can go out and check on it up close.

I just want to know are people putting the v3 inside housing to put them outside. Or are they exposing them to the weather and maybe I just bought two lemons.

I have 6 v3 camera’s out side and not experiencing any issue with them. However, mine are located under the eves of my house. Where is your Camera mounted? 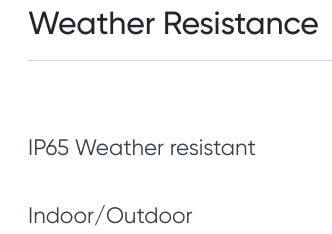 Here is the IP Rating Scale:

I have had 5 V3s outside since release. And have had zero issues with water, snow, ice, humidity or fog, uncovered, on poles watching the skies in the Midwest.

I did fry a number of the adaptors as those are not water proof, but have since resolved that with the outdoor ac adaptors.

There are some others that I have read that have had some issues, I cannot validate if it was a sealing issue but Good to check and make sure all flaps and plugs are tight and sealed properly with the rubber covers.

I have also had v2s and pan cams V1s (not outdoor rated) outdoors for years and had no issues. But that’s another story.

Great info @R.Good. forgot you had some in the direct weather facing up. This is something I would like to try as well.

Found it. Lots of discussion about the IP65 standards and user stories here

My Wyze Cam V3 died in the rain Cameras

Hello People. For those of you concerned with V3, rain intrusion through speaker holes, or heat build-up from coverings, loss of speaker function, or cost. Look at post #27 above. It will: Keep out direct rain. Allow for heat exchange (although heat is probably not an issue). Probably allow sound transmission (although I don’t really know). No new mount needed. Is inexpensive to print or make (the printed version uses about 50 cents worth of filiment-public library). Victor Maletic.

(And the volume and frequency of complaints on the forum is not that high.)

(So to answer the OP, The v3 is ‘really’ weather resistant.)

(And that’s my final word on that.)

(And that’s my final word on that.)

I seriously doubt it is your final word. To be honest, I don’t want it to be. I get a chuckle as I peruse the forums and read some of your responses or proclamations.

One of my Cameras is under the outer lip of a garage door that is also inside an eves of the house. That one rarely gets direct rain but after a wind and rain event on it had water that looks like it entered from the lens itself up front and got inside the lens itself.

The other one is under a deck trellis so it is not as well protected but it so far has been fine up until a few days ago. Hopefully it has not failed. And hopefully it will clear off when it warms up a little. But the foggy spot in the middle hasn’t moved much in 48 hours. So fingers crossed on that one.

But both units where bought within a few weeks of each other so they both maybe part of a bad batch of cameras and maybe I was just very unlucky.

We have V3 outside in Colorado and Montana with no issues

But both units where bought within a few weeks of each other so they both maybe part of a bad batch of cameras and maybe I was just very unlucky.

It’s possible. And it will be virtually impossible to verify.

If people kept track of the hours spent diagnosing and troubleshooting their $35 camera they would stop at some reasonable number, retire the camera and either:

Persistence is a virtue… up to a point. Beyond that, choose one, two or three for peace of mind.

(Had a gal friend once… aww, never mind.

Are hardware manufacturers legally required to track product flaws that may rise to the level necessitating a ‘recall’?

If so, I wonder what that level is, percentage-wise.

Waddaya, goldbrickin’? Get back to work!

I am not aware of any legal requirement to track defects in products that can’t reasonably cause a person harm.

Based on a small number of people on this forum who have said they have had issues I would say that this is not happening to many people.

Generally everyone who has an issue is likely to come to this support forum. The vast majority that are using the camera without issue wouldn’t even likely know a support group like this exist. So even if 50% of the people here said they had an issue it wouldn’t mean 50% of cameras have failed.

Generally everyone who has an issue is likely to come to this support forum.

That may be true, but I doubt it. In the past, a fair amount of people who began posting here when trouble arose said they were surprised to discover the forum existed.

Extremely dissatisfied with Wyze customer service; However, after 2.5 weeks it was made right and corrected Cameras

I used the forum as my primary help source from the get-go, mainly in combo with email support.

Email support provides Wyze and the customer a common transcript of the troubleshooting transaction. In this respect, it is (potentially) far superior to voice.

Wyze probably has data-pounded the possibilities and has a preference based on the numbers. They likely guide folks to their preferred option. Which do you think it is?

I have a V3 but I did get a cheap Housing for it from Amazon, Love the new Starlight feature it makes my old V2 look dim.
PEF Mount for All-New Wyze Cam V3 ONLY, Weatherproof Protective Cover and 360 Degree Adjustable Wall Mount Solid Housing for Wyze V3 Outdoor Indoor Smart Home Camera System

I just purchased a Wyze V3 camera and plan to put it outside so I will let you know if I have any issues as you are talking about. Mine won’t be under any eves so I am hoping I won’t have any issues. I will tell you that I purchased the wireless Wyze camera, and I have had it outside for over a year now and have no problems with it. This V3 camera is replacing one of the first Wyze cameras I ever purchased. This camera was not rated for outdoor use but I purchased the birdhouse type Wyze holder and it has worked outside in Massachusetts in extreme weather conditions for over 3 or 4 years. I am hoping I have the same luck with this V3 camera as it has an IP65 rating for outdoor use.