I have person detection enabled but the Wyze Cam Pan continuously records when my line of arborvitaes wave in the wind, and since were on a hillside near the ocean that’s almost all the time. Can you turn on person detection and turn off all other forms of motion detection for this camera? My current config:

May be wrong but I think

A. You can’t stop the motion event recordings but you’ve already set it to only notify upon person detection

B. The constant tree waving is going to run up against the 5 minute cooldown and keep you from seeing lots of person detections

C. The only solutions are buying CamPlus service to eliminate the cooldown and, before you do that, try cranking the sensitivity way down.

D. You can also try sticking a motion sensor much closer to the path and relying on that instead. This can trigger video recordings.

Can you turn on person detection and turn off all other forms of motion detection for this camera?

Short answer then is “no”.

In theory you have already told your cam to only record when a person is detected. I agree with @Customer about turning down sensitivity, but you would think that turning off ‘All Other Motion’ would eliminate the tree motion.
The motion detector is your best bet, but be aware of two things there:

You sure about that? I don’t think you can prevent the non-person events from being recorded and stored on Wyze servers?

If I turn off ‘Detects Motion’ under ‘Event Recording’ I don’t get events under my’ Events’ tab. Is this what we’re talking about:(I’m never absolutely sure of anything!) 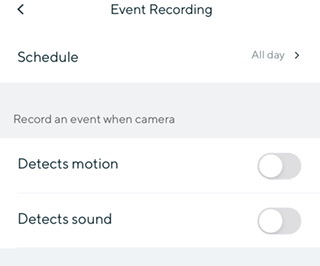 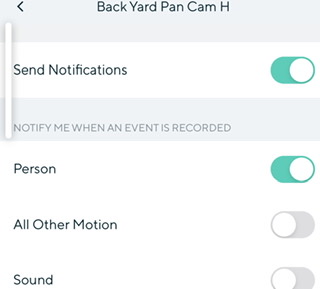 By ‘setting’ the zone, you mean moved the camera physically so the green shaded area encompasses what you want to detect people in??

Unless something has drastically changed you are correct. If you turn off detection of motion you will NEVER get detection of people. A motion event must be uploaded to the server and then that motion event is scanned for presence of a person. If you have notifications set for person only you get notified if there is a person and it does not notify you of the recorded event if there is not a person.

So the tree waving is going to make it constantly record events.

The answer to the OP is no you cannt turn on person detection and turn off all other motion.

I have set motion on with it’s sensitivity set to zero.
Zone set to the smallest square and placed where minimum motion occurs.
Person detection on.
With external motion sensor at entry points to trigger video motion recodings.
Notification off but Alexa tell me if a Person is detected from 10 pm to 6am.

This setup has been working well for me with very very little false trips.

I think I’m going to have to eat my words.
I have been relying on sensors not cams for a while (another topic entirely) and had not used the setup I described for some time. I went back yesterday and set a V2 and a Pan up as I described. Interestingly enough, I did get person and motion detection, but I got almost none of the detections at all that I had intentionally tripped. I deliberately and carefully timed using myself to trip the cams for several hours, taking into account the 5 minute cooldown. Almost none of those worked but I did get other motion events and person events, including motion events where there was no visible motion. These two cams were in interior rooms where motion was easy to control.
So, bottom line here for me is I have no clue what is going on. What @WyzeJasonJ said makes sense, so I’m going to go with that and, I guess, the idea that at least for the moment it is not functioning well.

Thanks for an interesting it confusing experiment!

I have to assume you’re using a V2?

Well, that clears it up Bud

The only consistent thing about these Wyze products is that they are inconsistent… Not sure where to throw the dart, hardware or firmware or software… Thing is, the hardware doesn’t change… Ever. But the firmware can dictate how the hardware will respond… Software is another bag of horse dung that needs extensive work but is, and I say is rather lightly seeming to improve

In that setup the person detection is on a Cam pan located outside under the eve.
The bridge and sensors are on a V2 located inside…with the brigde on a USB extension to a window that has a straight line of sight to the motion sensor which is 45 feet away.

Most of the problems seem to center around or follow FW upgrades, with what I tend to describe as server issues overlapping. It’s tough to distinguish when I’m running Beta on one device and production on another, but the things like sensor outages that seem to fix themselves I chalk up to server. Even Amazon is having problems-they shut down live support right after the pandemic started. I’m amazed that theY function as well as they do.

I still haven’t set up sensors yet but I ordered the power splitting USB cable for the bridge ahead of time.

I’m hoping it will magically avoid some of the sensor issues others have had.

There were earlier comments on another thread indicating that using even a short USB extension cable to remote the bridge from the cam helped. Other tips were using a stronger power supply and shorter cable like the Pan Cam comes with for a V2 bridge cam and never actually using a pan Cam as a bridge cam.
I’ve tried them all, yet were still having this conversation??

. Seemed to help but no magic. The one about the Pan Cam was spot on. Had trouble every time.