Every firmware update has a What’s New link that, presumably, should take us to a web page that would show what is new in the firmware version we are about to install.
So far this isn’t what happens. We are shown firmware updates that are 1 or 2 versions old.
Why bother with the link?

Are you a beta user? You might be ahead of the official public version release. The url should point to the same page that lists the new versions: https://support.wyzecam.com/hc/en-us/articles/360010068231-Wyze-Cam-v2-Firmware, we don’t have a separate page just for beta users.

D’oh, never thought of that.

Thanks Mark. I didn’t realise I would be using beta firmware. I assumed it was just beta app versions.

We should still have a place for you to get updates, one option will be on the beta forum of this section.

From the looks of the current upgrade…

It is still the same. No “What’s New” information to be had. Was looking for a list of the “latest features” promised in the initial splash screen. Again, this information turned up missing. Why? 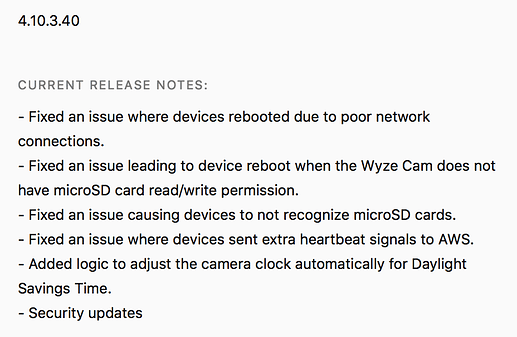 According to the date A Hsu updated the firmware notes yesterday, March 07. I have no way of knowing what was updated. I don’t bother looking for notes on the day of the release any more.

The firmware was released March 4.
timstik post is from March 4.