I just got the Facial recognition ai. First question is I’ve labeled one person under a name and all other peoples faces it has found are being saved under the same name. I’ve tried removing the face from tat name and it delete the face completely and also tried editing the name which just renames all the faces to the new name. Is there a way to label each Person under there own name?

I have found no way to do this. I have had this problem many times too.

What I do, is just delete all other faces but the main one with most of the same faces and use that as the name, and those other faces will eventually be grabbed again under new videos and it seems to help if you check more frequently and keep up with them so they don’t always group together. When new videos show up as face detected, assign it to a name quickly. Pretty soon, it gets to be a lot more accurate and works that way.

It is frustrating that there is no option to say something along the lines “ungroup this face from this current group of faces, but don’t delete it, I want to still use this video/face, but I just want to assign this one face in this group to a different group…because the AI is just thinking these are all the same person, and they’re not, and I want to separate it, not permanently delete it.” Unfortunately, there is no way to do this once it has automatically grouped a face with other faces in a group. You just have to delete it and wait for a new capture for that face.

Thank you for the info…… Doesn’t seem very efficient. I dont understand the logic on this one? There must
be a good reason for it to work this way?

I have facial recognition turned on, I have Cam Plus, and I’m a Beta Tester, yet my app still says no new faces. How did you get yours to work??

[Mod Edit] : Post was moved to this topic for consistency in grouping posts in similar topics.

I just barely had a friend tell me he finally got a single facial recognition on one of his V3’s, so we do at least have a single known case of it working on a V3. I don’t know if it’s ever happened more than just the once for him though. It has never happened on any of my V3’s so far, only V2’s. Has anyone else gotten a Face recognition on a V3 or Video Doorbell?

It’s a bit of a black box right now, but support said you need to have the camera at an angle to get a pretty-much full-on face shot from a camera for it to work. If the camera is much above or below face level it may not work.

I haven’t experience the issue of multiple different faces getting lumped together.

I have 2 faces under Account……Manage People. My wife and myself. I have never had an Event that shows up under Faces even though we are on many events that show as person. The Facial Recognition seems pretty useless at this point? Wyze advertised that this feature would be available in early 2021. Then that changed to 2021? I am not sure they will make that commitment with a useful Cam Plus Feature.

Any outdoor mounted Camera is not going to be at face level. Doesn’t look promising!

I’ve had a lot of recognized faces and the feature has worked as advertised, but I use v3 cameras inside looking through a window, so I realize that isn’t as common as having a camera mounted outside.

To be fair to Wyze, I know two people with cameras with face detection from other companies. The only one that works well is a doorbell cam, but that’s mounted and angled specifically to catch faces. The other person has an outdoor camera mounted above the door and angled down. That camera doesn’t catch faces either.

My guess is that AI has a tough time detecting individual faces when the cameras mostly see the top of the head and the face itself is mostly obscured.

Still, I’m sure the systems will get better with time and enough samples.

That would be good for the doorbell. Other than that I don’t know where this would be useful. I dont need Face Recognition for indoor cameras. All outdoor cameras are above face level. Dont want someone running off with the camera. Not sure this is going to be a viable feature. I appreciate your perspective.

It will still identify people and packages, etc. That helps cut way down on the “a car’s headlights just went by” motion notifications. It just won’t connect the person it sees to a specific family member.

I have not had any facial recognition on any V3 or the VDB. I am only getting Facial Recognition on my V2 Cam only.

My V2 is in the garage mounted up higher up and facing down some. It picks up on Face Recognition, not 100% of the time, but it does.

My VDB is closer to face level and it has not picked up on face recognition, even when I am standing directly in front of it.

Not sure why it is not picking up on the face, figure it is still being worked out.

and Yes, I have Face selected as part of the AI.

I wonder if the doorbell has a slow roll out of that functionality. I had face recognition enabled for all my outdoor cams for a very long time before it started working. I know for some features Wyze has to whitelist your account before it starts working, even if you are in the beta program. The new rule engine comes to mind.

I am not sure why Wyze would Whitelist me on this feature that they were asking Beta testers to join? If they are serious about moving this feature to general release. I would expect they would look forward to all input from the Beta Testers.

Wanted to provide you some insight into issues I and others, like @carverofchoice , are having with Facial Recognition.

As indicated in the past Facial Recognition only works on my V2 camera’s. I did a test to show you the images and would be willing to test/try anything you would like me to.

In my Garage, I stood in front of the Camera, I was notified that Tony was in the garage, which was a great thing. The initial review of my events tab had my name with the event. I clicked on the event and the Face associated to it said Unknown, even though the event said Tony. I then assigned a Name to the Unknwon Face - mine. Now the Event Shows Tony but the Event Page shows an empty space now.

This is the Event for The Garage (Notice it Shows Tony, the header says motion)

Next I went outside to my Driveway Cam (v3), the VDB, and finally the Porch Camera (v3). All of which only indicated a Person was present not who.

I know that it is being noted that the facial recognition works on the VDB and V3’s as well. But myself and others have not been able to get this to work.

Here is my facial page to show the faces my v2 has captured but nothing else has. I can click on each face so you can see all of the images for those faces if needed

What I am asking is the following:

Anything you can provide on this would be a great help.

This is just me making a guess but I know when I was doing testing early on, slight angle differences would make a difference between catching the face and not. If you have the ability you might try placing a v2 and v3 side by side and see if they then both capture it.

Great Suggestion, I used to have a v3 next to the v2 and had the same result. I will definitely try this again and see. However, the vdb is a straight on shot, and I made sure I was looking directly into the camera. Did not even pick me up and add it to the faces page as an unknown.

Going to add it now… Will report back

Ok so I did he test with a New V3 Camera just setup. It put me on the CamPlus Trial even though I am on the unlimited (99) CamPlus licenses. Don’t think this will cause an issue.

I have facial Recognition and Person selected for both. Garage is the V2 Camera Garage v3 is the v3 camera (guess I did not need to say that)

I lined them up as close as I could to get the same angle. Eliminating as many variables as I could. Still does not work on the v3. This was a great suggestion and shows what I and others are experiencing. 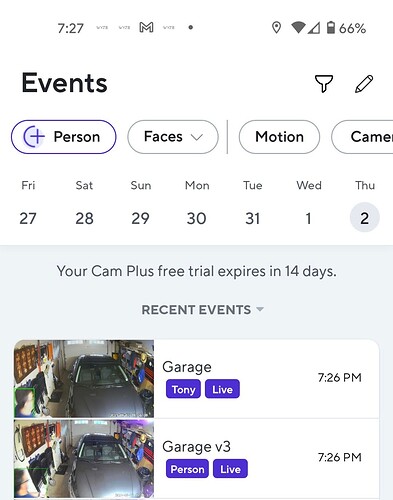