They definitely look like close to the same angle, at this point I think we can rule out environment and angle issues, hopefully this can help them get things working

Trying some additional testing. Curious if it is working for you? If so, are you Android or iOS?

I honestly have not done much testing on it lately and my cams are at some extreme angles to get a facial detection. This weekend I may set some up and test again, I am on Android to answer your question though.

Thanks, I just did another test but used my test iPhone and reset the vdb and the new Garage v3 camera CamPlus Settings.

Here is what I happened

I could not remove the trial license from my Android phone for the new v3 I was testing with. I ended up doing it from my iPhone and, while on the iPhone, I had to select the CamPlus options (Face and Person) again. I then went to the garage and tested (Nothing else changed), and the camera reported me on both camera’s. Figuring I was onto something, I decided to use the iPhone, removed the vdb from CamPlus (unassigned) backed out and then assigned it again. As with the Garage v3, I had to go into the vdb and setup the AI preferences. On this, I removed the vehicle only. Everything else is selected. I then went out to my Front Door and it recognized me. So it could be a bug with Android Devices. Not sure, but I am closer to the potential problem, I think. Here are some images: 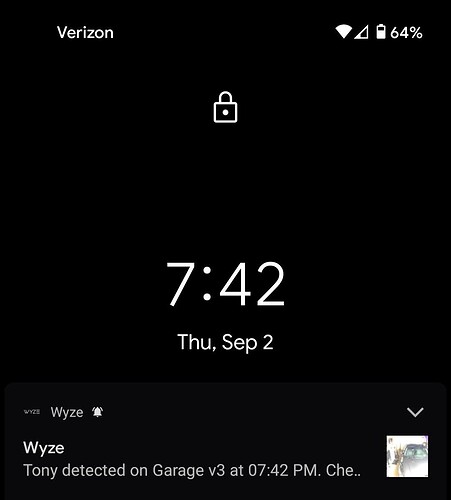 Now to be fair, the second time I went into the garage neither Garage Camera identified me. Guess I am forgettable.

. Tomorrow I will test with the Driveway and Porch Cams to see if I have success with those as well.

I would like to figure this out so I can let Shawn know what I have found.

Looks like you are definitely getting good data to give Shawn. This could be a reason many are saying it does not work

Yea, here is something more interesting now. I went in to look at my events as I am getting person Alerts on my Driveway. I noticed that the Events which labeled me in them have now changed. So the issue may be bigger than expected.

This was the Front Door Image posted above (Android Device was used for this image):

This is what it is now on the Android Device

And this is what it is on the iOS device

This is what it is now on my Android Device

And this is what it is on the iOS Device

Notice how the v2 (Labeled as Garage) maintained the “Tony” name. The v3 and vdb did not.

So this is a definite issue with the vdb and the v3 as it relates to the events storage and maintaining state or meta data.

Wyze is so lucky to have you test things like this. You are so great at testing and figuring out stuff and helping them improve stuff. If they don’t have you beta testing hardware, they really should just because of how thorough and insightful you are on bugs and such like this. I’m glad you’re here buddy. I’ve been trying to figure out for months why and how there is some kind of issue with V3’s and VDB Facial detection and you’re doing amazing at narrowing it down. Just proud of you buddy, happy we’re friends.

Thanks for the words and compliments. Feeling is mutual. You have to realize that you guys make me want to do this and continue. I truly feel like I am helping. But I have said this before and truly believe it, I pale in comparison to you and your ability to logically lay things out so that the masses can understand. I am getting better at that, thanks to both of you, but still have a ways to go. This is a team effort here, and we all contribute in many different ways and support each other. As with you, I am proud to call you all my friend.

Still testing, but wanted to share my findings so far.

Last night I removed the Porch and Driveway Cam from CamPlus via the iPhone. I then added it back in, also via the iPhone, and set Facial on the camera’s. I now have the following camera’s, with facial recognition, and have been removed and added back via an iPhone.

All seem to be reporting facial recognition now as you can see in the images. 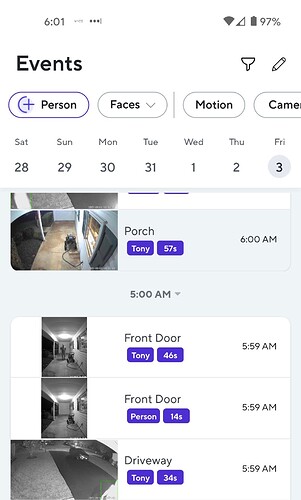 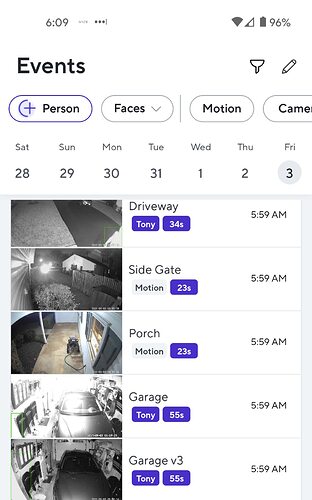 There may be a bug with the Android App when assigning AI preferences.

I know I need to do more testing, but it is becoming apparent that it may be related to Android and not iOS. It could be related to how the Meta Data is being stored or sent for storage. Speculation on the Meta Data. However, it is a bit strange that the issues only occur when I use the Android Phone to setup the AI preferences as well as assigning a name.

…Here is the update
So I did more testing today and I have had success all around with my Cameras and Face Recognition.

In order for me to get Facial recognition on these Cameras I had to dp the following, not sure if it is a fluke, but it worked for me.

Basically, I have had 100% success when setting up CamPlus via an iPhone. Seems like the best thing to do, if you are having issues, is to remove CamPlus from your Cameras and then add it back again after backing out of the CamPlus area. I am even getting consistent package notifications which were sporadic before, if at all. Using the Android Device was also successful, but primarily for the v2 Camera.

In addition, when I worked with the Unknown faces on an Android Device, it was hit or miss on how it would behave. Most of the time, My Name would disappear on Android and in iOS it would switch to Motion. When I manipulated Unknown faces via iOS, I did not experience this issue,

All this to say, it appears the issues is primarily with Android and not as apparent when on an iOS device.

Here are a few pics to show it recognized me on my Cameras: 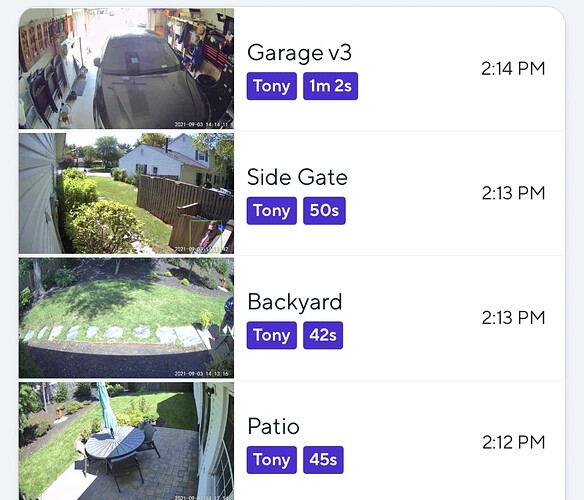 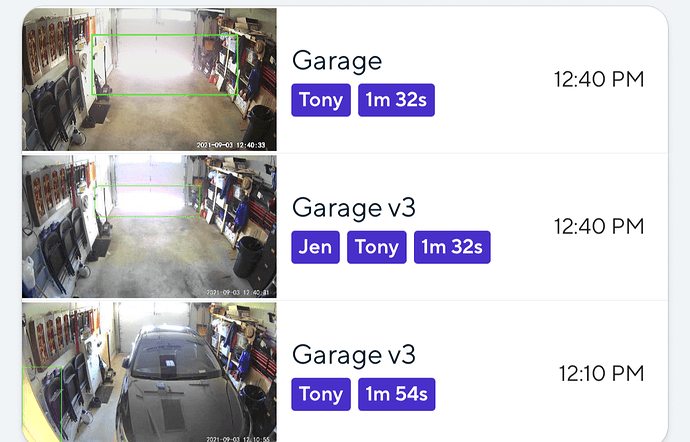 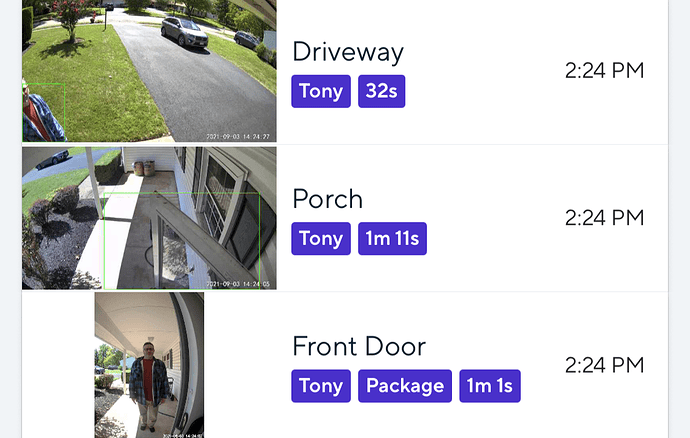 I added names to the following faces via the Android Device. Here is a sample of what happens to the Name followed by the event show unknown. Directly above are the same events appropriately labeled. However, after about 2 minutes or so, the name disappears and becomes unknown as shown below. The ones added via iOS persists without issues. 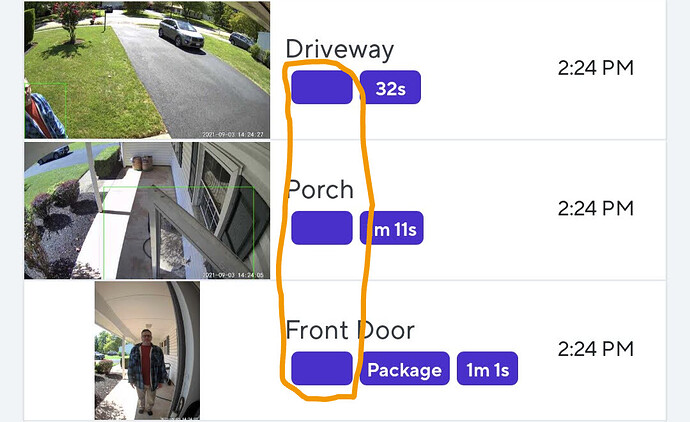 This is all amazing information and I commend how thorough and informative you testing and posts have been. Sounds like there are problems in Android and that is the only platform I currently have access to, but I am hoping I can do some testing this weekend.

Be curious if you experience the same as I have. Thanks for the feedback.

EDIT
Just an additional FYI, I just looked at the events which were blanked out in the image above. It now shows the name after I reset the name with my iPhone.

Its great that you are doing all this testing! I just wish Wyze would comment on this. I have never seen anything posted by the Wyze Coders as to how this should work. What is to be expected from Face Recognition. Yesterday was the first time I saw a video from the face tab in events. It was my wife. We walk by these cameras many many times a day. We are on IOS. (Iphone). Again Wyze said this feature would be working early 2021. Now they say just 2021. I dont expect them to make that objective. Disappointing!

I would test with one camera or the VDB and simply remove it from CamPlus and back out from the CamPlus location to the main screen or the Home Tab. Then go back into the CamPlus area and add the VDB or Camera back in. After which, go to the device in the home tab, start the camera, go to settings then the Event Recording and finally CamPlus and pick which AI notifications you would like.

I know you probably know this, but wanted to get it out.

Found another issue with Facial Recognition, But this time is is with iOS and the selection of recorded faces.

I started the app, went to Account and then Facial Recognition. This is what I didL

iOS (Scrolled until Loading appeared, did not continue to scroll)

Here is a video of what my experience is like. iOS is buggy, Android seems to work better in this case

I agree. I had the same issue. I want to train the AI to recognize the faces better but it’s so burdensome to group faces together. Plus, I’m surprised I’m still adding faces to the same people so many times. How many faces do you figure the AI needs to recognize a face accurately?

@WyzeShawn The following is a bunch of faces which I need to remove as they are not family members or friends. I am posting this as I am not sure if there is an alternative way to work with faces and either assign or remove. [IMG_0124] What I was hoping is for a way on the main screen to select multiple faces and then either delete, add them to a known face, or simply create a new name for the selected images. Currently I have to go through these one at a time. Tap on a face, then choose …

I recall somewhere in the forums Wyze Shawn indicated to community members that they are looking into making it easier to assign faces without having to do so many individually. So hopefully this is forthcoming, but still vote for it to indicate the desire is stronger with more people.