Yea, it should work and does with some issues on and Android Device. I had added information of testing I did. i have an iPhone and an Android which I test from, I found that using the iPhone and removing the camera’s from CamPlus, backing out of the app and going back in and then adding the Cameras back to CamPlus (again, from my iPhone), then setting Face Recognition as one of my AI preferences, seemed to do the trick. After that, I can use the Android Device, but I don’t touch the AI preferences from it.

You can also try clearing Cache:

Go to the Account Menu, bottom Right, then App Settings, then tap on the Clear link to the right of the Cache File line - position one in the list.

To ensure all cache is cleared, you could shut the app down, long press on the Wyze app, tap on App Info, Tap on Force Stop, the go to Storage and Cache and tap in Clear Cache. Then Restart the phone.

Note: On the Home Screen you will see all of your Thumbnails will be missing for your devices. These will come back once you live stream the camera.

I’m on Android, am a Beta tester, and I have Facial Recognition enabled but it still doesn’t recognize anyone’s faces. At least a few times a week I will stand in front of my v3 and stare at it so it can get a good look at my face and still nothing.

Wyze is working on it. Here is what was said.

Issue 1: We’ve identified a problem when turning on the face recognition, the face collection is failed to initialize. This happends mostly to Android app with Cam v3 and doorbell devices. Right now we are investigating the root cause and working on the fixing.

If you have an Android Device you can try the steps I did. Once I set it up via an iPhone I had, everything started to work. Like you, other than my v2 camera, nothing else worked. Here is what I put together.

I found that using the iPhone and removing the camera’s from CamPlus, backing out of the app and going back in and then adding the Cameras back to CamPlus (again, from my iPhone), then setting Face Recognition as one of my AI preferences, seemed to do the trick. After that, I can use the Android Device, but I don’t touch the AI preferences from it.

When I click on the Event and start Streaming, it says unknown

Wait so this could be the reason why my doorbell and V3 never detected faces before unlike my V2?? I’m gonna have to re-setup facial recognition on an iPhone tomorrow then I guess wow.

Yea, on Android I went to each camera stood in front so that my face was looking directly at it, no luck. Then on an iPhone, I removed the VDB from CamPlus and added it back after I backed out of the CamPlus location and went back to it. Then I stood in front of the VDB and it recognized me. I then did the same for the rest and they all started to work. Hopefully, you will experience the same as I did.

Here is my link to my testing and experiment, This is the start location, go through the thread:

@WyzeShawn Wanted to provide you some insight into issues I and others, like @carverofchoice , are having with Facial Recognition. As indicated in the past Facial Recognition only works on my V2 camera’s. I did a test to show you the images and would be willing to test/try anything you would like me to. In my Garage, I stood in front of the Camera, I was notified that Tony was in the garage, which was a great thing. The initial review of my events tab had my name with the event. I clicked …

Have they started fixing it?? My doorbell recognized a face for the first time today

and I didn’t do iphone setup it was through android…

Not sure, they have been working on fixes, so this is a positive thing.

may as well. If it is working on your doorbell, maybe some of the fixes are related to server side. Definitely a positive direction.

That is great news! I just ran a bunch of checks on my VDB. I even removed facial recognition, removed cam plus, readded cam plus and facial recognition, but it still isn’t working for me that way. Not too surprising. I think they will be releasing an App update to fix this soon, and then we’ll be good and consistent.

Still, I do have a single V3 that appears to be working for Face recognition, at least sometimes now (definitely works if I put my face right in front of it). So it’s good news that this is happening sometimes on V3’s and VDB’s even before the fix comes through. WyzeShawn has always come through as soon as he is informed of something, so I have no doubt we’ll get this soon enough. We are beta testing after all. I’m glad we were able to help them find something like this before public launch which is the main point of them giving us this early access (which is very appreciated).

Yea exactly it may still be in testing because for it to actually catch your face you have to properly look straight at it for a good second, hopefully, that’s improved soon cuz obviously, nobody will always do that when walking into the house

My facial recognition has been working great. I too am in the beta program. It’s one feature I rarely have issues with. I have pan, V1, V2, V3, and outdoor. The recognition is so awesome, it picks up all the characters from my favorite TV shows. It’s actually hilarious to go in every few days and delete all the people off the TV. I’m not sure how I could efficiently exclude them because I want that to still be an area where I get motion detection, but if that’s the most inconvenient portion of that feature I’ll live with it. Please don’t update It is nearly every update I’ve had has caused some sort of issue from breaking all of my V1 sensors even though they’re less than three months old, to a variety of issues with each of the different versions of my cams.

Looks like i don’t need do to the setup again because across both Android and iPhone the doorbell face recognition is working great now! Some false positives so far but thats just how it was with the V2s at the beginning before it learned fully. Thanks @WyzeShawn

Not sure this is the correct spot, but it is related to Cam Plus and a GUI difference between iOS and Android.

When going into the Events area of a Camera, v3 in my case, the new Cam Plus logo is not present.

On Android I see the following

On iOS I see this - which is correct, I believe

can you submit a log of this problem? we’ll take a look

Will do, I will submit it from my Android.

I believe it is only a GUI display issue.

Let me know if you need anything else

My VDB picked up a person but it incorrectly labeled it as me. Here is the image of what it caught: 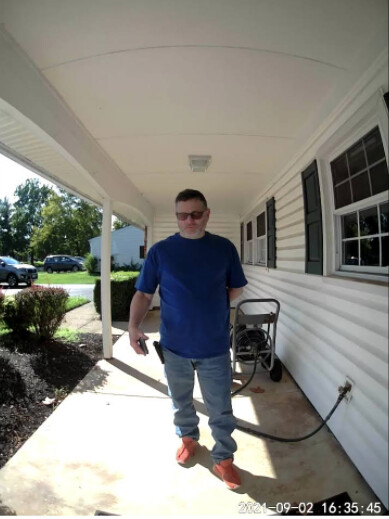 However, when I went to face management, I saw the face and it showed Unknown. Here is what it looked like there:

Just want to point out (for the benefit of our previous conversation on this), that the other guy looks like he is wearing a dark BLUE shirt. I am telling you, the AI thinks blue means you

It helps that you both appear to have grey/white chins to the camera too., AND point #3, this dude also has glasses (just like all the other false positives), only this time they are hanging on his shirt. But, that’s not too much different from when it thought a blue car with glass headlights resembled you too…just saying…blue shirt, glasses and this time white chin…getting a lot of the same things in all your false positives.

(I realize that wasn’t the entire point here, you are doing a good job demonstrating that the identification is not consistent from the video screen (where it identifies the guy as you) vs the face event filter, where it says not named)

You got me there. I do where blue and most of the false matches seems to be with people having blue on not matter who they are.

Now that is too funny.