Doorbell rings when the app is opened

I have my video doorbell installed and the chime goes off every time the app is opened. It doesn’t help that it’s a loud chime and it plays that long Westminster bell tune (my grandma’s clocks always played it on the hour).

Does anyone know what’s up with this? It’s so annoying and I just want to use my app and the doorbell

Welcome to the forums! For situations like this, please provide info about your devices you need assistance with. Ex: What app version are you using? Is this the original doorbell? What version of firmware is on it? What device and os are you using the Wyze app on? When was the last time the device was restarted? What have you tried for troubleshooting? Have you tried using another device with the app to see where the issue follows?

I’m using the Android app and just downloaded the app so I would assume it’s all up to date. The app is version 2.27.33 and my phone is Android version 12. My girlfriend’s phone does it too, if she has the app open looking at the doorbell video then the doorbell starts going off. I don’t know what version her phone is. It’s the Wyze Video Doorbell, not the Pro. I haven’t tried restarting my phone or anything because I feel like it’s something with the doorbell but I don’t know what to try or what to do about it. We got it for Christmas and I installed it yesterday

It doesn’t help that it’s a loud chime

Need some clarification, is this the included Wyze chime or your preexisting doorbell chime? Which chime is sounding when either of you open the doorbell? And:

Doorbell rings when the app is opened

chime goes off every time the app is opened

Does this happen when you open the app itself? Or you go into a live stream of the doorbell itself?

Except this morning it seemed to go off for no reason. The app wasn’t opened but my gf went outside to get in her car to go to work and the doorbell wouldn’t stop after that.

My dad said it seems like electric doorbells aren’t compatible with video doorbells? I’m going to try to to upload a picture of my doorbell chime so everyone can see what I have 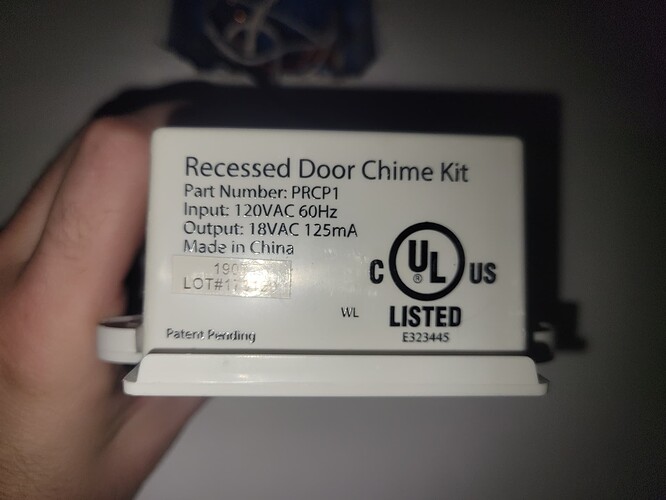 Yea the Wyze doorbells are not compatible with any pre existing legacy doorbell chime. During the install/setup, there is a step to bypass the existing chime so that the existing house wiring is only used for power. Looks like you have some other system happening. The Wyze doorbell uses the now bypassed constant power and it’s included Wyze chime that gets plugged into a nearby outlet as it’s “chime”. Sorry your fancy tuned chime won’t work with the system. I bet when you look at the doorbell in the app that the system voltage changes because the Wyze doorbell is now using more power therefore causing that fancy legacy chime to sound.

More info can be found at the support pages. Here is a short and sweet page that legacy doorbells arnt comparable.

Will my mechanical chime still work after installing the doorbell?

No, your existing chime won't work. Hardwired and non-Wyze chimes will be bypassed so that the power can be used for your Wyze Video Doorbell. What if my transformer is built into my chime box? You...