Another reason to hate HOA’s , I would recommend until this is worked out to make a sticky difuser out of some semi transparent plastic tape, it should soften the light and not interfere with the button and not make it ‘uggly’ from the street.

The other day my internet service went out while I was away from home, and I returned to an ultrabright light flashing between blue and orange repeatedly, visible from probably 200 yards away… Please correct this!

Just installed … really hate the blue light. No idea why they didn’t have a setting to turn it off just like the Wyze logo. Please fix it!

I would be happy with just being able to turn the blue light off. I like that it lights up when motion in detected but would like it off in stand by.

This feature is a no brainer for the next firmware update! Please Wyze Team! This is my only « cons » on the doorbell so far!!

In the meantime, here is a write-up for a little craft project I whiped up.

Here is how I “diluted” down the status light because it’s sooo darn bright. Starting with the control. Wyze VDB.

I tested placing a vinyl patch over the button. Tried white colored cricut brand and some other brands, but went with some pro car "carbon fiber " patterned vinyl (for a little tactile touch pan) I had. It covers the button nicely, but there is still some bleed through from the status light. Ok, actually a lot of bleed through 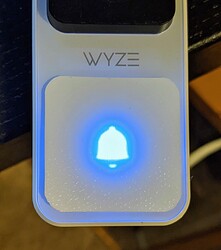 Next up picked a piece of black vinyl and the button light did not bleed through at all (other than some minor “glow” around the outside edge of the vinyl patch. Buuut I actually wanted to see the status of the camera, I didn’t want to cover it up fully. I cut out a small hole in the middle so the status light would still show through. 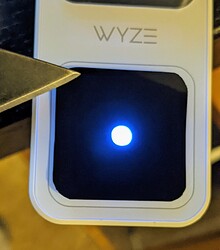 Now assemble time. Black patch goes first, white patch goes next to make the doorbell look white on the outside, then added a Wyze colored circle (for now) to be a visual “button”. Mounted and joy! It hasn’t been night yet so I can’t see what the status light will look like for now, but when I cup the doorbell it looks pretty dim which is right I think where I want it. May play around with the circle color, black maybe to match the lens? But I’ll keep it Wyze blue for now. Proof of concept… success. 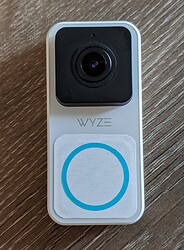 Continuous Blue light at night should be configurable in setting. It should turn on as soon as motion is detected in the defined detection zone.

I agree. Please update the bell light software. Just installed my first Wyze doorbell. I’m impressed how easy it was. However, disappointed that I can not turn off the LED light that flashes like a beacon at my front door. The light is too bright in the day and obnoxious a night. The bell light flashes blue and more attention to my house. Seem like it is counter productive when you are trying to secure your home with a camera but now with the new doorbell draws more attention to your door. This door bell can be seen as soon as you turn down my street.

Wyze Engineers, please update the software to allow users to dim or turn of the illuminated bell light and static or flashing light.

If you agree, vote at top to help implement this change soon.

I would like to be able to turn off the led white light during the day.

Installed the doorbell this weekend. Came home at night and thought there was a K-Mart Blue Light Special on my front door! Holy cow is that bright! Saw it from all the way down the street! Wyze… C’mon now. You can turn the lights off on your cams, You can turn the lights off on the Hub… But the doorbell is giving you problems programming? Get the fix in there so we can turn off that blue beacon!

I am reaching out with a suggestion for the new Video Doorbell Pro. I recently received it and I love the product thus far. I happen to live in a condo and at times don’t want my neighbors to feel like I am spying on them (although that’s the point as my packages have gone missing before). I recommend giving users the option to hide the blue ring “status indicator/light indicator” on the doorbell. This would allow the user to see a live feed, however, outside of the small noise I hear in the unit once its activated, the person/thing being recorded is not made aware,

Feel free to reach out with any questions.
Happy Holidays!

Just buy a sheet of 19mm (3/4”) stick-on dots. Black or white works well. Stick it on the blue bell and then you have a soft glow behind the dot. Fixed!

Are we any closer on turning off the annoying blue light on the Pro Video Doorbell? Please give us this option in a firmware update soon. I’m nervous it’s going to attract unwanted attention instead of deter it. Listen to your supporters Wyze.

It has been on the Wishlist for over a year and has yet to be tagged ‘researching’ by the Wyze crew. So, no one up there is thinking about it. And, we only have 101 votes for the improvement. That’s not nearly enough to motivate Wyze to upgrade it. They are also too busy fixing the firmware right now so that the doorbell actually functions as a proper video doorbell and camera. This particular make-a-wish affects both doorbells. Until we see a status change in the post we can only hope. If it is moved over to the roadmap, then we have progress. Those are the mods and improvements they are actually putting work into. I taped a big cardstock dot over mine and drew a smiley face

if you want it to move up the priority list for development. Then add a reply post at the bottom

PLEASE give us the option to dim or turn off the blue light around the doorbell button on Doorbell Pro!

Would LOVE to see this added ASAP! Installed my Pro yesterday, and it has been great so far… UNTIL I drove up last night and saw the BRIGHT blue circle pulsing.

Voted. Neighbor has a competition doorbell camera that is able to disable all external lights. The lack of this feature in the Wyze Pro is tempting me to switch. I really don’t like the blue light illumination my entry at night whenever it detects movement.

The pulsing blue light on the Doorbell Pro bothers me, so rather than put up with this until Wyse provides an option to shut it off, I’ve wired a toggle switch to the transformer in my basement. When the battery is low, I can toggle the transformer on to recharge the battery during the day till recharged then toggle off

I installed the wired Doorbell a few days ago, and my wife now wants me to remove it due to the blue light which cannot be disabled… I hope the disable feature can be added soon.

I would like to turn off the illumination of the chime button on the Video Doorbell. This attracts attention which is not be wanted by every user of this product.