I attempted to purchase the Cordless Vacuum Cleaner from the website. It was advertised for “$159.99 + shipping included”. When I went to check out I noticed they charged me for shipping. I contacted customer service who checked the website and then tried to convince me that “Shipping included” meant there would be an additional charge for shipping. Other items on the website say “+ shipping” to indicate that shipping will be an additional charge. After a lot of back and forth and customer service not being very helpful they finally admitted it says shipping included but they would not be honoring that. I’ve had a lot of respect for Wyze and their products up until now but this shows a lack of integrity on their part. If they advertise a certain deal, they should honor that deal. This is just plain dishonest. Even if its a mistake on their website, they need to honor it and correct the website. They have yet to do either. I am very disappointed in Wyze over this.

It looks like the free shipping promotion ended on 5/3/22 according to the current promotions page, but I verified the vacuum webpage currently says + shipping included on the website. I’m sure that’s an error someone forgot to update, but even so, it does say that currently.

Will you post your support ticket number? Preferably your order number too. I can’t make any promises on the result myself (I am not an employee), but I’ll see if I can get someone from Wyze to look into this for you.

My first support ticket # is 2157887. I tried again on the phone rather that chat session but I didn’t get a number for that conversation. I did not actually order the vacuum cleaner. After they acknowledged on the phone that the website did indeed say shipping included but they were not going to honor that, I decided I no longer wanted to do business with them.

OK, thanks for the clarification. I’ll get some feedback passed up regardless.

After they acknowledged on the phone that the website did indeed say shipping included but they were not going to honor that, I decided I no longer wanted to do business with them.

Seems pretty clear. The poster is correct and the company has refused to honor their ad. 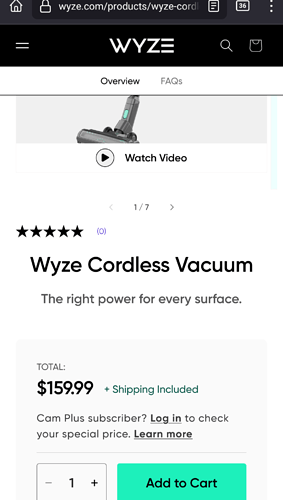 Wyze does a lot of deceptive advertising. Look at the picture of their outdoor flood light, the one flood is pointed to the left with the hood on it at the top. This is not possible due to the way the joint for that flood works. Look at the claims Wyze makes for their AI, it mostly detects parked vehicles which nobody cares about, while completely missing people or pets walking in front of the parked vehicle. Look at their Air Purifier, app doesn’t update the AQI correctly and the most of the time there are no AQI dots on the graph, which are supposed to be there hourly according to their advertising picture.

So yeah, the only thing Wyze does good is make funny product videos and falsely deceptive advertisements. And they’re amazing at releasing buggy software.