My name is Hongfei and I am a Product Manager at Wyze. I have a few questions about dashboard cameras and would like to hear your thoughts on them.

The survey takes about 5-10 minutes to complete. The responses will only be used by Wyze and we won’t share them elsewhere.

Here is the link to the survey:

Hello! My name is Hongfei and I am a Product Manager at Wyze. I have a few questions about dashboard cameras and would like to hear your thoughts on them. The survey takes about 5-10 minutes to complete. The responses will only be used by Wyze and...

Thank you so much for taking the time to help us!

I had one of the Racoons fill it out. Some good questions on the survey and a section to make your desires known.

Couldn’t answer in the survey, but it would be good to have HDR to pull out license plates when there are brake lights active. The ability to read license plates under varied conditions is very important for dashcams.

I filled it out. A couple things I have on my current dash cam that I didn’t see mentioned. I prefer the capacitor, sometimes they call it supper capacitor over lithium based batteries. This is due to the extreme heat that can happen from a dashcam in a closed car behind the windshield in the sun. I also have an add on polarizing filter that snaps on over the lens and can adjust to the particular conditions and mounting angle by turning the polarizing disc in the mount. This made a big improvement on picture quality by reducing glare both day and night ans always want that now. HDR is also important for the glare and light changes. WiFi is very important with auto save in case of damage such as fire.

My name is Hongfei and I am a Product Manager at Wyze. I have a few questions about dashboard cameras and would like to hear your thoughts on them.

The survey takes about 5-10 minutes to complete. The responses will only be used by Wyze and we won’t share them elsewhere. 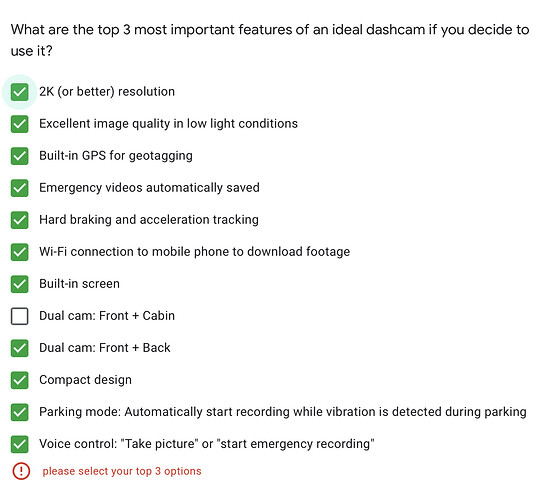 I have used some dashcams and have done a lot of looking into these and I have learned a few things I hope you’ll keep in mind:

A lot more could probably be mentioned, but those are things I didn’t really think much about until I’d used one for a couple of years. If you do have it connect up to the phone/app when we turn on the car, it could have all sorts of cool “smart” options. You could possibly try to market it to some parents of teens similar to how other devices alert parents of excessive speeds or if it thinks there could’ve been an accident or something. If the dashcam automatically connects up to an approved person’s phone, it could potentially send an alert if it senses an accident or something for example. I look forward to your research and hope you really do come out with something, even if it is super simple.

Lastly, having just a simple dashcam was really helpful when my wife got in an accident a while ago. They were assuming she was at fault. At home I reviewed the dashcam video and was able to show we had video footage proving the other driver broke the law and was at fault (they moved into a right-turn only lane, signaled they were turning right, then did an illegal lane change in the middle of the intersection and went straight, ramming into my wife). Dashcam footage changed the ENTIRE thing to the other person’s fault instead. It paid for itself many times over.

On the cam I have now I like the built in GPS, it also has a separate setting for speed on/off. The problem with speed it takes a few seconds to catch up to real time. Like if I make a full stop at a stop sign/light the speed shown on the screen shows I am still moving for a few seconds which could screw you if LEO said you didn’t come to a complete stop

I agree with the super capacitor idea but it would be nice to have replaceable batteries which may not be possible. My old camera works great but the battery is dead so it will not save the last video and if your in a accident you are screwed there also as far as video.

Yes, good explanation/example. I would love a way to have them tracked, but only show up if I select them. I have heard that since the speed is determined based on the GPS, if GPS is enabled they can always calculate speed from it and possibly use it against us, and that is concerning. In theory, if it is a really important case, they can always use other markers to determine speed anyway. For example, in some dashcam videos they will use certain things on screen to calculate speed. If they know how far apart object 1 is and object 2 (mile markers, lines on the road, or any number of other things that have a specific distance or can be measured for a set distance), then they can check how long it takes those 2 things to pass by the same pixel location and figure out the exact speed that way by analyzing the video. Of course they rarely go to this extent unless there are hundreds of thousands of dollars or more at stake…but I suppose at some point the GPS/SPEED conveniences aren’t a critical concern since the video itself is usually enough to pull anything that is really important even if we disable GPS/speed. I still like the idea of an option to only include that data if I tell it to do so.

Then everyone gets what they want and they cater to every group.

I would love to see a dash+cabin camera with a WIRELESS wide-angle rear cam. Many SUVs now have power in the rear cabin - that way I won’t have to try and run a wire all the way to the front of the vehicle.

I am just trying to understand, what is meant by a wireless rear cam that still plugs in for power. Would it connect wirelessly to front cam for some reason? Maybe to use the little LCD screen on the front cam? Why not just have it display on the phone screen instead so that it can be a totally separate device not dependent on the front cam?

I wouldn’t want to see a rear view video of my last accident, the front view was bad enough. I was doing 65 MPH and got rear ended by a BMW doing 80 MPH. rough ride and my 2008 Tacoma Pick up was destroyed front , rear and both sides.

OH WOW! That would’ve been terrifying! Something your mind-cam can never erase even if you don’t have a dash cam to remember it by. Yikes. I can certainly see the benefit in the newer cars having things like assisted braking to recognize situations like these and try to prevent them from being so bad, at least in theory. I can’t imagine how traumatic that must have been for you.

One thing I like about Dashcams is that if the recording helps me then I can have proof and choose to share it. Even if it was something this traumatic and I didn’t want to relive it or see it again, I could still choose not to view it myself, but it could help make sure that my repair and hospital and other bills are taken care of (evidence it wasn’t my fault no matter what the other guy tries to say).

Sadly, there are too many instances where other drivers try to lie about what happened and push the blame anywhere else, making up things that weren’t even true.

I wish more people were honest like that, but in my 4+ decades I’ve learned that when people are facing potential financial or other consequences for their actions, it’s more of an exception to the rule to find someone who takes full responsibility for themselves, and while those are amazing people, I’ve learned it’s safer for me to have a dashcam or something just in case I’m involved with one of the other kinds.

I just put some photos of why you need a dash cam on the Wishlist dash cam thread. Just Red light runners and a Mr. No Stop, Two from today and one from Tuesday if you are interested. As for my experience I found I had things that hurt I didn’t even know could hurt.

The Air Bag did quite a number on the skin of my arm.

lots of road facing directly to the west.
camera needs filter and hood

Running a wire to a power source in the rear is a LOT easier than running a cable all the way from the back of the vehicle to the front windshield to plug it into the dashcam.

I agree with the battery issue. Temperatures reach over 115 in the summer, and get a lot hotter if the windows are closed. Can be a problem for batteries. Also the camera case and electronics need to withstand the high temperatures here, and low temperatures in other locations.