Can a cam be used as a dash cam?

I wasn’t able to find this topic, but can a WYZE be plugged into a USB port in a car and used as a dash cam?

You can certainly plug it into USB port, but it will probably lose power when when the engine is turned off. And when that happens, the camera will shut down.

This thread has a lot of info on Wyzecam in car. Unfortunately, due to a firmware bug, and hour and a half after it starts recording to the SDcard, it will stop recording.

WyzeCam in Car Shuts off recording after 1.5 hours Cameras

Christine, In the past, I’ve done a number of off-grid recordings with my Wyzecam, notably a long (3+ hour) capture while sailing the fjords of Norway. Never had any problems. That got me curious about your in-car recording bug (shutting off after 1.5 hours) so I’ve done some experiments with my V2 camera (w/firmware 4.9.3.64). I was able to reproduce the bug. It’s the loss of WiFi that causes the recording to stop, NOT loss of internet connectivity to Wyze HQ. TL;DR, I set up a new WiFi …

Google is your friend.

byit losing power when the car is shut off after a while your almost certain to fry the sd card as well through read write incomplete corruption. walmart has dashcams for like 15 bucks, I cant say anything for the quality but they are made for the task. one thing most dashcams have that the wyze cam wont is a g sensor. you can set the sensitivity and if you are in some sort of impact (crash) the camera will automatically lock that footage and save it. its a good feature to have.

The 1080p profile’s bitrate (HD) is very low so there are major compression artifacts when compared to a higher quality dashcam. Other than that and providing the “90 minute without wifi” bug is fixed I think many people are thinking about this as a dashcam. I personally use Blackvu and is about as good as you can get, albeit don’t bother with their price gauging cloud offering. The mount is impeccable and the integration of a dedicated rear camera is amazing. Using two Wyze V2 would be an excellent, super cheap alternative. If they bring back black well then that would seal the deal in my opinion. 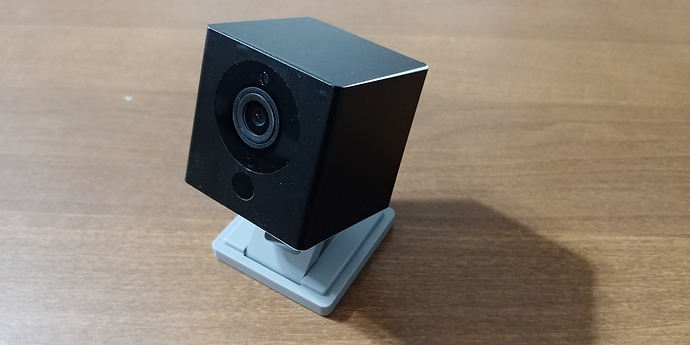 You absolutely CAN run a Wyze camera as a dashcam. I have had my oldest V2 mounted to the windshield behind the rear view mirror for something close to a year. The cigarette lighter plug that the cig to USB adapter I’m using is hot all the time, so the only time the camera loses power is if I need that outlet for something else. I have the camera set to record all the time. With the current firmware, there is a known bug limiting that usefulness, but it used to work properly and I expect the fix will come out before too long.

Internet retailers, especially Amazon, sell dash cams in the $10-30 range having video better than the Wyze Cam. As well, they have features exclusive to dash cams, like shock senors to lock the video upon an impact and park mode which is video on motion/shock detection. The latter draws minimal current. The price always includes a suction cup mount. They won’t suffer from power cycling.

They have LCD screens and will mount as a storage device on a PC so you can view on a real computer and a real player without yanking the SD card.

The Wyze Cam is loaded with features having no value in a dash cam.

The one I have cost $9.99 and with a $12 Samsung 32GB SD works great with video useful for insurance purposes. Maybe legal disputes depending on the incident and your innocence. Even on the $200 unit a friend has, plate numbers get fuzzy at about 30 feet away. Could be the newer 4K ones improve on that.

The black color is soooo smooth and comsistyant I love it !!!

Tried to use Wyzecam black version in the car. When I left the house it was connected to the wifi and of course lost signal as I left the drive. The camera filmed my entire drive without wifi however when I stopped for gas and started back up it would not automatically start recording again. Anyone else have this issue not being able to continuously record once the engine is cut off and back on?

It is something that has been brought up before but once the cam loses power it needs to connect to the internet when it powers up to start recording again. The key is maintaining power.

when I stopped for gas and started back up it

The camera has to have constant power. My guess is when the vehicle was turned off the camera shut off as well. This will immediately make the camera stop recording. I’ve used my v2 cams in my truck several times and they record continuously as long as they have power. I actually use a power bank so that I don’t have to worry about the camera turning off. My cam recorded for over 8 hours without any Wi-fi, and You just have to keep it powered up when you leave home and it will work fine.

Hi, thinking of trying this are you still having firmware issues?

Just used my wyzecamv2 in my car and reviewed SD card and video studders, not a smooth recording … seems to jump. Why? Anyone know a fix? I was in HD

Hi guys
One important thing on using electronic inside the car is working temperature.
Inside can get 34 'f hotter. that’s 134F on 100F day in Texas.
Does anyone living and using the cam as dash-cam in weather same as Texas? How it’s keep it up?
Wyze website noted -5°F - 113°F (-20°C - 45°C) as operation temp.

Judging by the air bubbles and slightly (paper-thin) raised edges along the circles in the front, I can confidently say that they used a sticker wrap. After my guess, I checked with a google search and sure enough they do exist but are expensive, at least $10+ for this sticker wrap.

I can confidently say that they used a sticker wrap.

this particular one was done with a vinyl wrap ( noted by the edges) but all my others have been done with plasti dip and have a far better appearance. this wrap was actually made by a community member and to my knowledge they were the first to start doing it for the V2’s when they came out. they are far more plentiful now

this only cost me about 2$ so I couldn’t argue that.

plasti dip is far easier though and can be removed easier too.

Sounds good. Can you recommend a particular dash-cam from Amazon?