Is anyone having any luck using their Wyze camera as a dash cam? And if so, how do you do it?

I tried it once. I set the camera on the dashboard against the windshield. The dashboard sloped toward the windshield so it was nice and stable. I plugged the camera USB into the car USB port which was powered when the car was on. The camera recorded to the SD card as long as the car was on so when I got home and plugged it into power I could “View Playback” to see the video. I noticed a couple things. Apparently the camera remembers what time it is when it loses power. When it regains power it starts using that time until it can learn what time it is via the wifi it is setup with. So when recording in the car the time on the video is not correct. The other thing I noticed is that the last few seconds of video before the car is turned off is not recorded. I’m guessing the video is buffered in the camera for a few seconds before it is written to the SD card.

Can one use the iPhone as a hotspot and alleviate that time issue?

I adhered the metal disk plate to my dashboard so it’s an easy mount (and easy to disconnect when I leave my car). I bought a 12V cigarette lighter plug to 5v converter so I didn’t have to use my car stereo’s USB port for the camera. I get to listen to podcasts on a flash drive plugged into the USB port.

Biggest problem is the timestamp is wrong (since wyzecam doesn’t have a brain to remember that). I’m not convinced wifi sets the clock automatically without opening the app and doing a time sync. I never bother waiting for wyzecam to connect to my home wifi and I don’t pull my phone out of my pocket to launch the app to do a timesync.

I plug the microsd card into my PC to look at/save the video and I occasionally plug the wyzecam into my PC to do firmware updates when I see wyzecam staff post that an update is available.

I put one of my cameras onto my dashboard last night for a test. I found the comments about the time being wrong interesting because my V2 camera had the right time. Obviously when I drove away from home, the camera lost WiFi connectivity, but it should be recording to the uSD card. I plugged it into a USB adapter that plugs into the accessory power outlet (not switched). I will see what I think after looking at the recorded videos.
I did a little playing around with locations before leaving it just sitting on the dash up against the windshield. If I look how it looks, I am going to plan on mounting it to the windshield so it will be behind the rear view mirror looking forward. May install a couple more if I am happy with the results.

Came home and found an interesting issue. Apparently the camera will not connect to a known WiFi when it comes into range of it - presumably until it is power cycled. As I mentioned in my previous post, the camera is sitting on the dash of my car so when I drove away from home it lost WiFi. I have been home for about 45 minutes (where it should have killer WiFi coverage) and it has not connected. Looking at my router logs, the router has not seen a DHCP request from it, and my WiFi does not show it connected. I want to wait it out to see it eventually connects overnight before going out and power cycling it.

When you say it has not connected, have you checked what the status LED on the camera is? That sounds like a firmware “bug”. Just curious, what is the DHCP least time? Normally, devices will renew their lease shortly after half of it is used up.

But the Camera’s wifi controller chip should have known when it lost its connection, and should start looking for the SSID, and should have reconnected to the router’s AP once it was back in range.

I don’t know if it is a requirement that it ask for a new IP if it has one and its lease has not expired. Because it has a reasonable expectation that it is reconnected to the same network it was previously connected to (same SSID and password), it may skip reasking for a DHCP address. Best practice would be for it to always request a renewal of the lease; it can and should request the same ip address as it was previously using, although it is no guarantee that it will be offed the same ip address again.

Can you see what IP address your router gave to the Camera? If you can, is it possible to ping the ip address?

There is a lot of complexity being hidden from users of technology. I know, because it wasn’t always hidden, and connecting a device to a LAN wasn’t as simple as “plugging it in”. The point is, there are many places that something could be broken; trying to determine what isn’t working is the hard/interesting part. But it is also the reason that most help desks just tell the user to reboot everything and see if that fixes it. It usually does (in the short term) and gets the monkey off their back.

You should be in range of your home wifi, but my Q is if your wyzecam is getting power. I know when I shut off my car when getting home, the wyzecam power gets cut so there is no way it could connect to my home wifi while the wyzecam is still on my dashboard. Maybe when you park and shut off your car at home, the power is cut to the wyzecam no matter if you have it powered by cig lighter outlet like me or the USB flash drive port on your car audio system.

I let it sit for about eight hours and it never connected.

The status light is solid yellow. When i first drove away it went flashing yellow / blue, but after a few minutes it went solid yellow. Ill look up what those statuses are when i get to a computer. I agree that his is a bug.

The DHCP lease time is three hours. Yesterday, i was gone from the home WiFi for about 16 hours. I agree that the camera should have started looking for its WiFi connection as soon as it lost it.

The router is pretty smart (not your typical consumer home router), and yes, i can see in detail what it is doing. My two Wyze cameras have DHCP reservations so they should always get the same IPs every time. Last night i looked at the router status and tried pinging from the same LAN. This morning i just tried to ping, and then noted the yellow status light when i got out to my truck.

As for the old days, been there. Been playing with computers since about 1980. I remember using 110 baud modems, dial up Bulletin Board Systems, token ring LANs, Novel networking.

Yes, i sometimes get annoyed when tech support people want you to just reboot rather than fixing the problem. No doubt that a power cycle would fix this, but that does not fix the problem.

Yes, the camera is on an un-switched outlet in my truck. The status light on the camera also confirms power in un-interrupted (even during engine start).

Well, I have tried three times today to create a bug report new thread about this. All three times my post appeared to post properly, but within a few minutes, they were gone. Don’t know why but either someone has it in for me, or today I’m not allowed to start a new thread (I’ve successfully responded to several posts today).

I sent mail to support to ask about what is deleting posts. What is odd is that I also replied, and my reply got deleted too, but it had a link in it. Maybe they are trying to filter spam, but the presence of links doesn’t necessarily imply spam, (but most spam does include links).

I think we’re having some difficulties with the forum, I am sorry posts and comments are getting deleted. We are looking into it!

We’re having some technical difficulties on the forum it seems, while we are figuring this out, can you email us what your topic post was so I can get that escalated to our Tier 2 techs? Definitely want to get this figured out! (support@wyzecam.com)

Let me know what that support ticket number is and I’ll send it up, thanks!

Best way to do it is to set you hotspot on cellphone to be same as your home wifi network. So u leave home and camera is powered up and u turn hotspot on your Cel phone on and it will connect as if u were at home and no network password or name had changed

this will also result in the wyzecam having correct date and time display. It is very easy and data usage is not heavy

I tried it but everyone is right, it will not display the correct time. Also, it records randomly. Today it partially my driving on my way to run errands, but did not record on my way home from running errands. It also often has files that say “Can’t play. This file isn’t playable. That might be because the file type is unsupported, the file extension is incorrect, or the file is corrupt.” 0xc00d36c4. I’m going to stop using the camera in my car because it has not recorded two near-car accidents of other bad drivers so I don’t expect it to record if a bad driver should actually hit me.

You might want to read through and VOTE for this topic:

Any plans for a Wyze dashcam? I feel like Wyze could do it better for less money than the likes of Anker and Aukey. 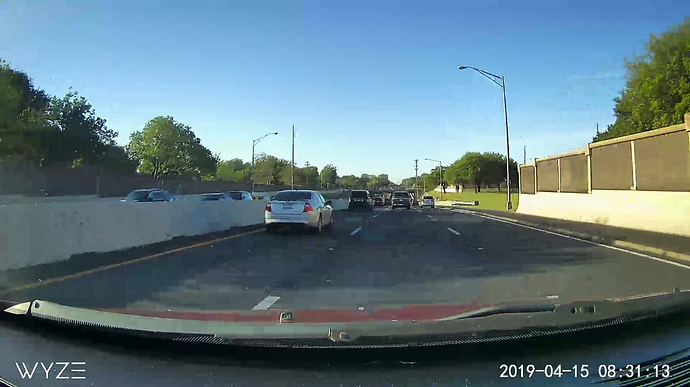 Thank you! I just voted for it.

Way to go Flash!! For $20 you can’t go wrong correct time or not. The action on the video is going to be where the value is. I’m thinking that if you have continuous recording to the SD card, it should record everything while the car is powering it. I doesn’t show your speed or GEO location either, but for someone running a red light or backing into you this would save you.

Well to be honest, while it was fun having a dash cam for my drive to an event, what really I wanted was to video the actual event, which was outdoors and near my car. The “Dash cam” concept was close enough to help me find this solution, and it worked perfectly!