Hello to All
I have been asked if I would share my source code for 3D printing custom window-mounted Sq Tube Glare Shield V3 camera holders. There is no source code, but I will share my procedures and methods. Perhaps they will provide a path for someone to automate it. My method of creating a 3-D model which can be exported to an STL file and then 3D printed is described below in detail. Also, the method is available as a word document. With the word document, you can write in your aiming angles and use it in the detailed math expressions, and easily switch between pages to gain an understanding of the simplicity of this method.

Here is how a practical person might describe in words what I am going to present below.
Imagine you have a magical square tube that a V3 camera (without its base) will fit snuggly into the end of the tube 20mm. Because the tube is magical it will pass through the window without damage, But the camera is not magical and will be stopped by the window. So you start moving the tube through the window until the camera is stopped by the window, Now you aim the camera to the right and then down to your aim area of interest, now only the upper left corner of the camera is touching the window. Now with a very sharp knife, cut off the portion of the magic tube beyond the front face of the window. The remaining tube against the window is no longer magical. With some strips of thin material you previously prepared, Glue a brim around the sides of the tube that is against the window face. It kind of looks like a miniature hat with a hole on the top for the camera. This is a description of what my method is with the necessary details to accomplish it.

Victor’s Method of drawing up the solid for a through-a-window-view of a Square Tube Glare Shield V3 Camera Holder. Here is the link for a Word version of it.

I use AutoCAD for my drawing, but since the simplest drawing commands: JOIN, EXTRUDE, UNION, ROTATE3D, and SUBTRACT are all that is needed and available in any basic 3D drawing program. 2D drawing is also needed to draw the part sections that will be the basis of the solids extruded from them which will then be further 3D manipulated. After drawing a part, you may need a lefthand version of it. No need to repeat the drawing process, instead to a MIRROR3D command. MIRROR3D can also be used to mirror an up-looking version from a down-looking version. After the 3D drawing of the part has been completed and checked, it can be exported to an STL file and 3D printed. A printed example is pictured below.
People using more advanced software will probably find easier and more advanced procedures to accomplish the same end result. 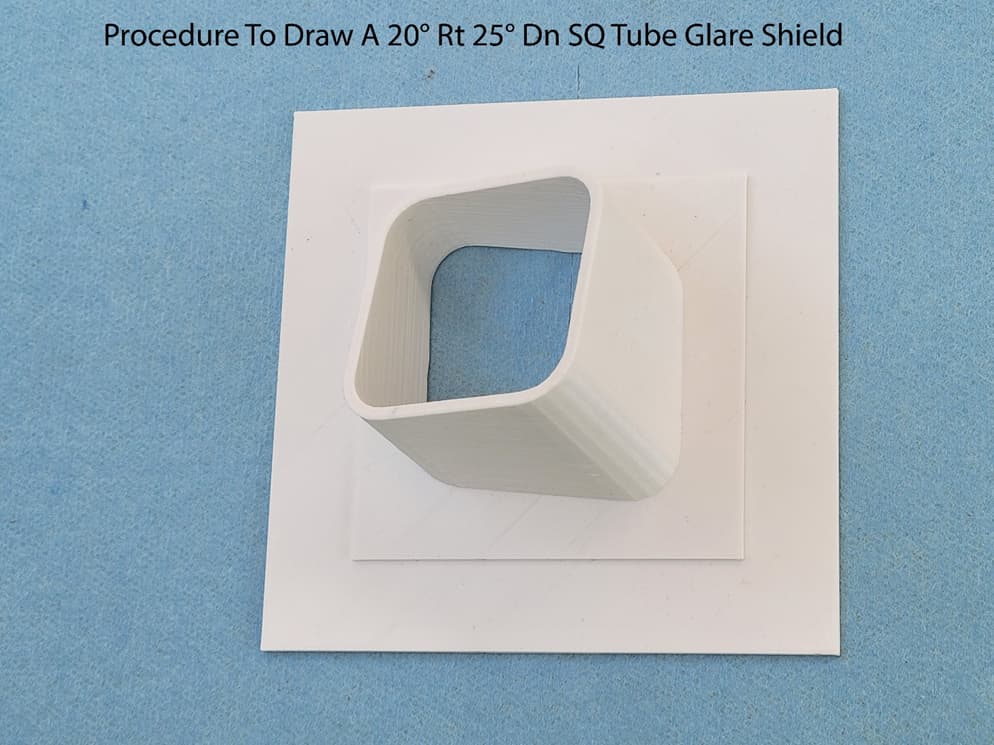 This camera holder/glare shield is made from 3 solids and a fourth solid that I call a Subtraction Block. This block is used to help form the part, but is not part of the finished product.
The Window Plate is two simple extruded square plates that are then unionized. 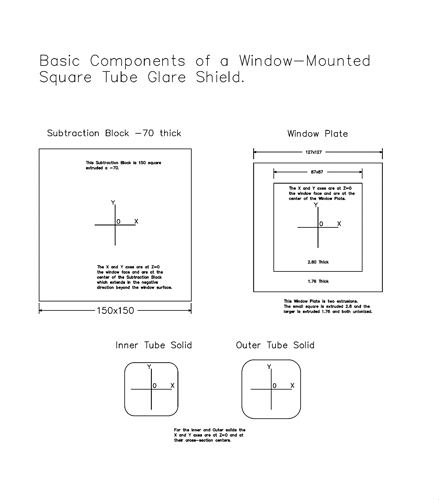 To create a printable part that the camera will fit into with little or no cleanup work after it is printed some details will need to be attended to. I physically measured the V3 camera with machinist calipers. I prefer digital ones that can measure in millimeters or inches. I add 0.25mm to the length and width of openings that will be receiving the camera. Also, if the camera tube will be printed at an angle to the 3D printer plate, I add my so-called stair-step correction, which is covered on the next page.
The wall thickness of this part is somewhat arbitrary. The thickness needs to be thick enough to print nicely and to carry the camera’s weight. To make the part easier for the printer to print, consider using discreet multiples of the printer’s table motion resolution. 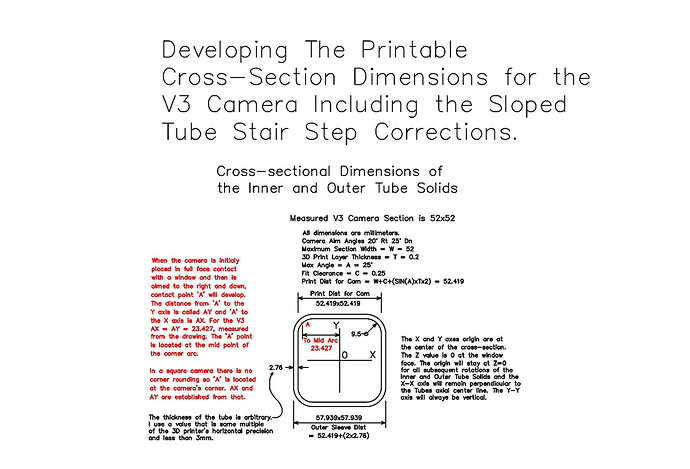 This sheet details how fit-up interference arises when printing a sloped surface. Printing on a slope creates a series of stacked and offset layers. The cross-sectional shapes of these print strings are really more rounded or elliptical. The squared-off shapes in the drawing below provides a mathematical approach that gives numerical values that can be incorporated into the part’s dimensions. I think it is better to have a little looser fit-up than a tight one. Loose fits can be shimmed out with tape applied in the right places. 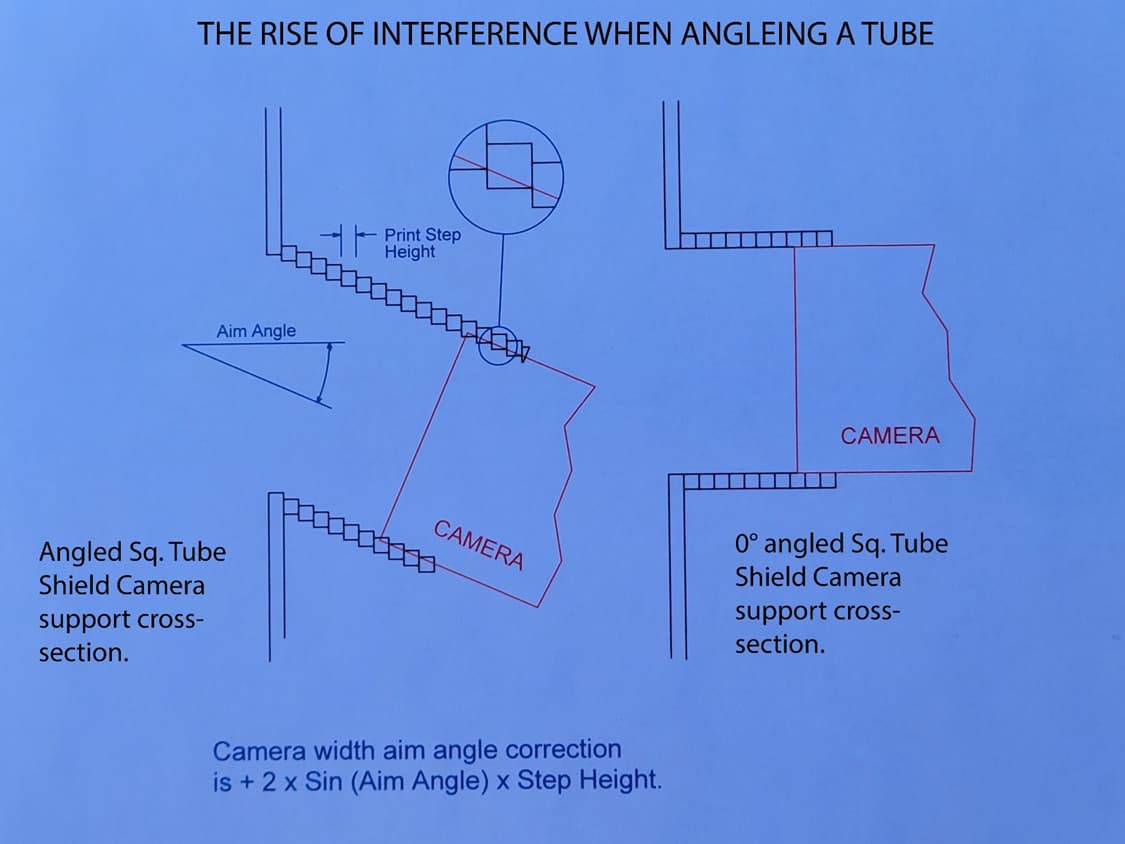 The Working Length is the amount of extrusion needed to properly sleeve (hold) the camera while holding it at the specified Horizontal and Vertical Aim Angles. One intent of the geometry for the Sq Tube Glare Shield is to have one corner of the camera touch the window with non-zero aim angles. Touching the window provides the least amount of field-of-view restriction resulting from aim angles greater than 20°. With both aim angles zero, the whole face of the camera touches the window. There are no field-of-view restrictions in this case. 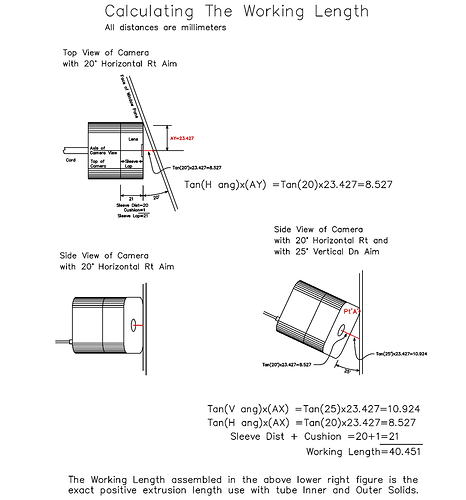 The picture below shows the Working Length as it applies to this Sq Tube Glare Shield. It is the red arrow that extends along the tube’s centerline axis from the face of the window to the plane of the tube’s end. The length of the blue arrow represents the Sleeve Lap, and its length is included in the red arrow’s length. 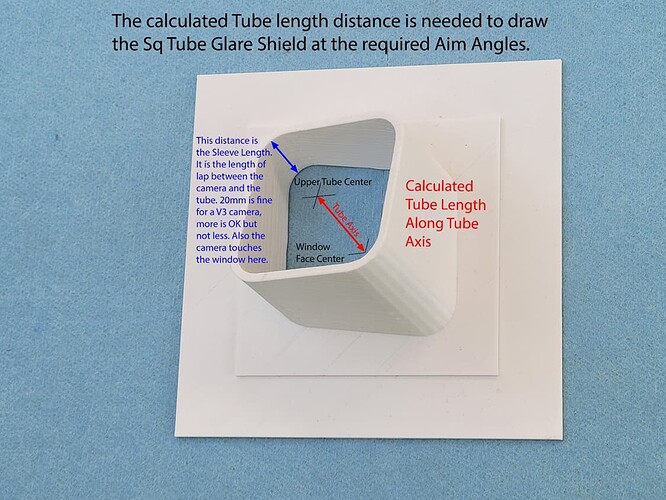 In this depiction, the Inner and outer sections of the future tube are separated and multiple copies are made for the 3D manipulations to follow. Each of the sections has a centerline X and Y axis that lies on the zero plane (which is the surface of the window). When these shapes or the solids extruded from them are copied and moved about, the intersection point of the X and Y axes will be the grips by which they are moved, attached, unionized, rotated, and subtracted. 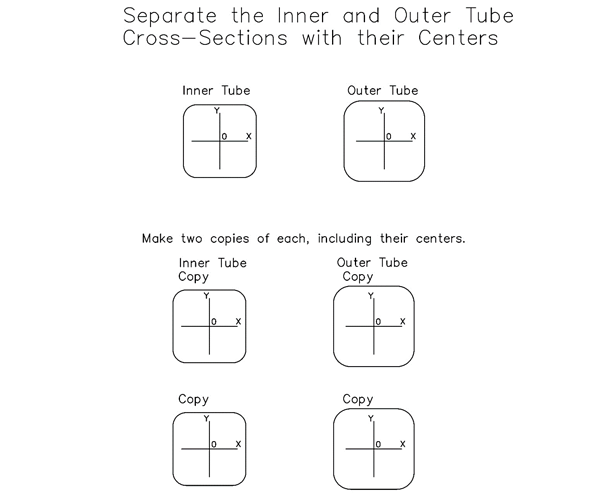 I proceed forward with the shape manipulation with copies of previous results as an insurance policy against my blunders and mistakes. It is easier for me to discard a mistake and resume from a previous state than to somehow undo it when I may not realize what I did and how to undo it. 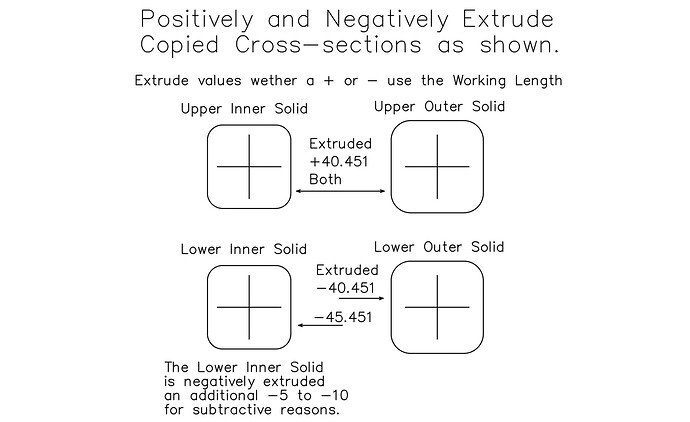 This is an oblique view of the above extrusions that will be piggyback stacked and unionized. 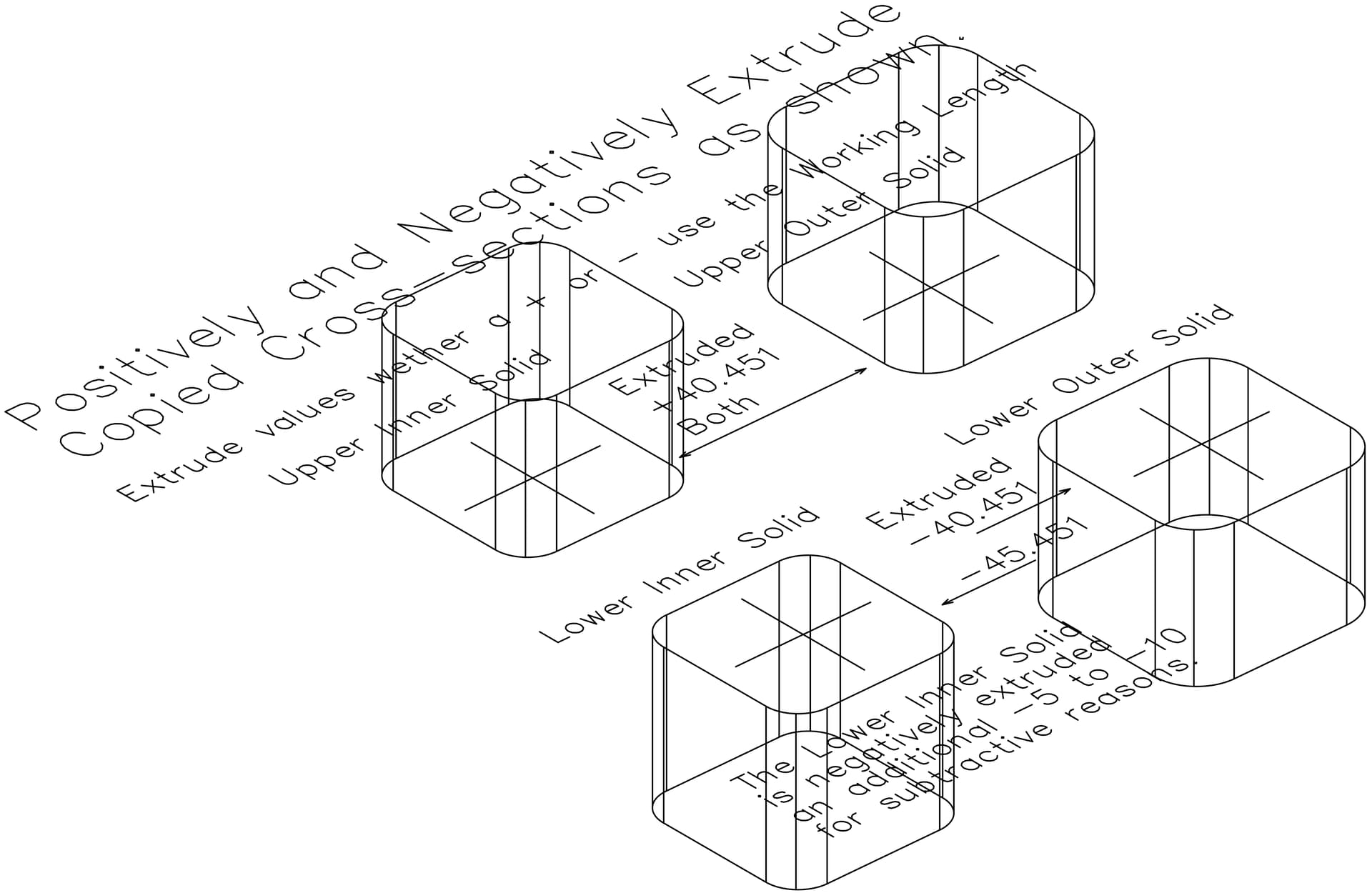 In the oblique view below the X and Y axis within the solids will be the references for horizontal and vertical aim angle rotations.

When selecting a solid for the horizontal aim angle rotation about its Y axis be sure to select the X axis segment to be included in the rotation. The rotation of this axis and the concept of Working Length are key in making the final finish geometry correct.
The lower 25° Dn view incorporates the 20° Rt 3D rotation from above. If you wanted an additional 3D rotation about the Z axis where it passes through the center point, this is where it would happen, after the Rt and Dn rotations. The views below are Z plane projections. 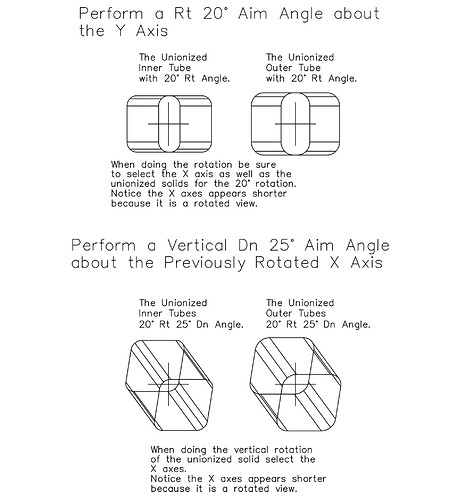 The two depictions below are where the Window Plate Solid and the Subtraction Block are copied and placed with the rotated Outer Solid at their center points. 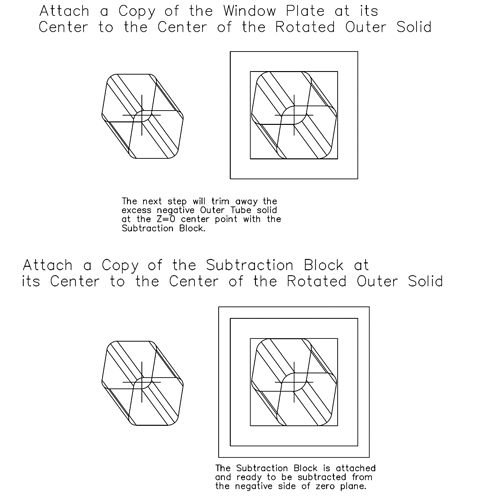 The next operation will be the subtraction of the Subtraction Block from the rotated Outer Solid, and then unionizing the Window Plate and remainder of the Outer Solid.

In the figure below right, the Subtraction Block has been subtracted from the Outer Solid. The remaining Outer Solid and Window Plate are unionized. 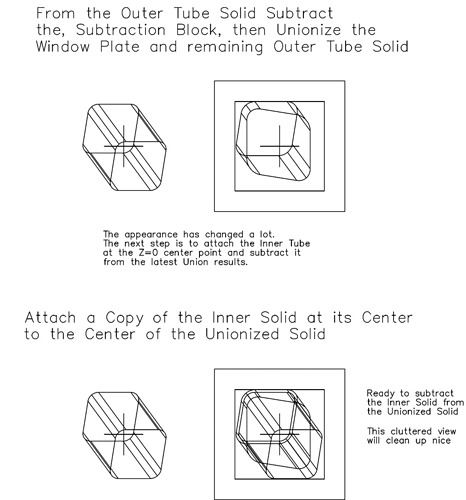 The last subtraction results in the finished part. Before exporting it to an STL file and 3D printing it, run some checks. 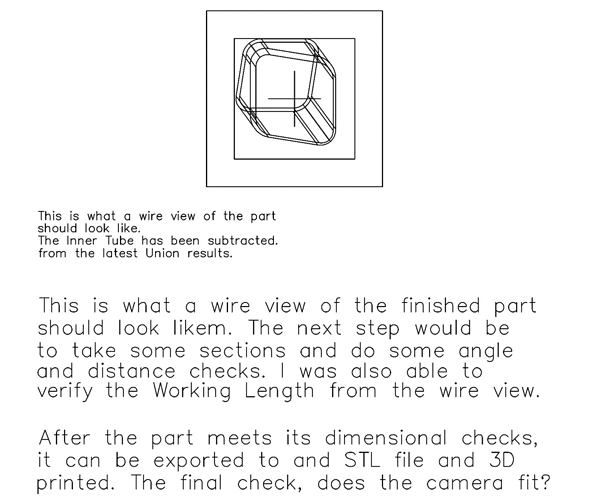 Below is an oblique wireframe view of the finished part. 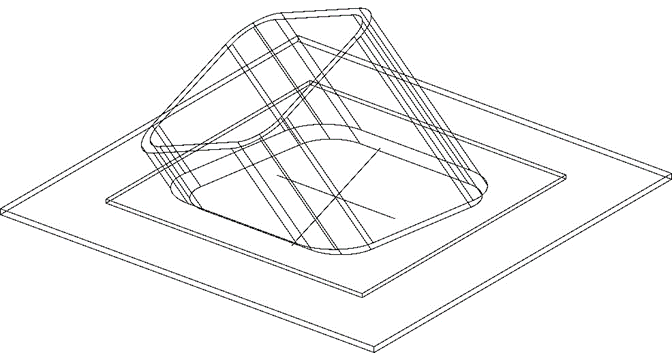 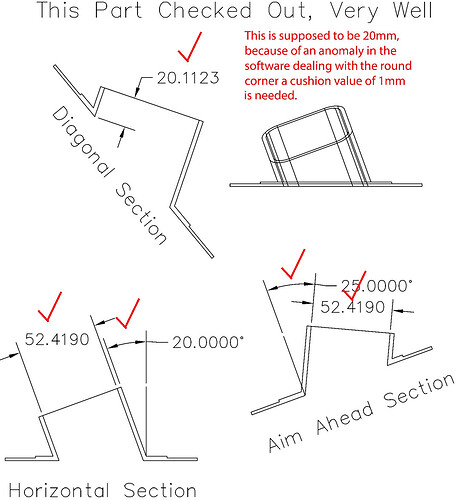 Not shown here, the wireframe was 3D manipulated to obtain a Working Length measurement it checked out to four decimal places.

This is the finished part holding a camera. This version of it requires that the base be removed. A 3D printed filler plate fills in the notch left from the base removal, also printed is a cord holder to take most of the cord’s weight. 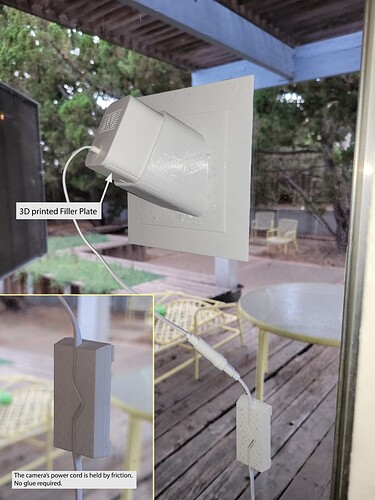 I saw you were working on a new post! You posted a while ago then deleted it.

So I expected you were waiting to update with more info first.

I saw someone on Reddit a few days asking for help with the glare they were having needing to tilt their camera at an angle. If I find it again I’m going to refer them to your post(s).

Hello @carverofchoice.
Yes, I did delete a post but it was a test post testing whether jpeg files created from AutoCAD drawing to PDF then to Jpeg through Photoshop elements would work out. It works fine and the cad drawings look very crisp in their final jpeg version.