I have 2x Wyze Cam v3’s,
One has a CamPlus subscription, annaully.
The second was on a 14 day trail, but just before the trial ended, the App stated that it will extend the trial for another month.
Then this second V3 camera lost its “status” effectively going offline, in the Wyze App.
Following the various options posted in another thread, I unplugged and plugged the camera back in, and it then became active(online) again, in the app. However the extra Trail period for this second camera was no longer available.
No big deal, I figured I’ll just purchase another CamPlus sub, but for some reason, the app says I’m not eligible to purchase another subscription because I’m not a current or previous App user?, see attached pic, But I am, aren’t i?
so now I’m not sure how to get another CamPlus License???

You don’t buy it there go to the web site

Website won’t let me order it either?
And I’m in Canada, so the redirect to the Canada site doesn’t even have an option to purchase the CamPlus. 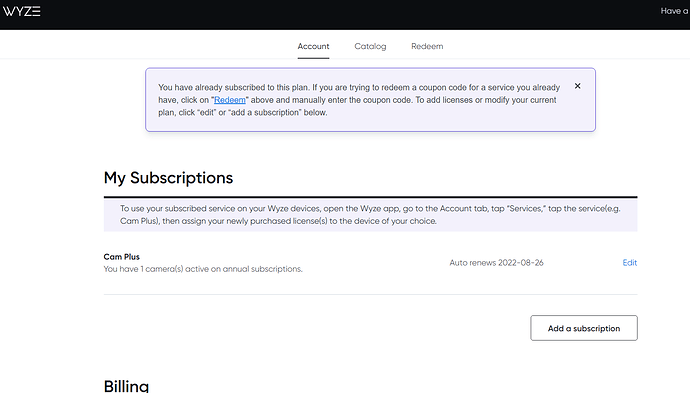 So the edit button does not let you add more