Cannot figure out the schedule for Wyze Plug

I’m trying to figure out how to shut off the wyze plug via schedule for the following times:
1 AM to shut off and turns on again at 6 AM on the same day.

I simply cannot get this to work. Any ideas?

Try using the local schedules inside the plugs settings. Make sure you disable any rules you created to avoid conflicts.

Thanks for your suggestion. If this is what you meant, then it doesn’t work. See attached.

I’m not sure why.

There was another user who had issues with a plug when the times were in two different days. Theoretically it shouldn’t matter and you would have to start with it On, but if it isn’t working try this:

Disable or delete rule #1 and add two more, one for on and one for off.

There was another user who had issues with a plug when the times were in two different days.

OP can try reversing the start/stop times and the action. Off at 1am then on at 6am.

try reversing the start/stop times and the action. Off at 1am then on at 6am.

Unfortunately, you can’t do that within a single schedule. That is the way the OP has it now. The start and stop action lines are pre-loaded into the UI. All you can change is the time.

Two schedules should also accomplish it regardless of which rule is listed first.

Why wouldn’t this work:
(Rule vs. schedule) 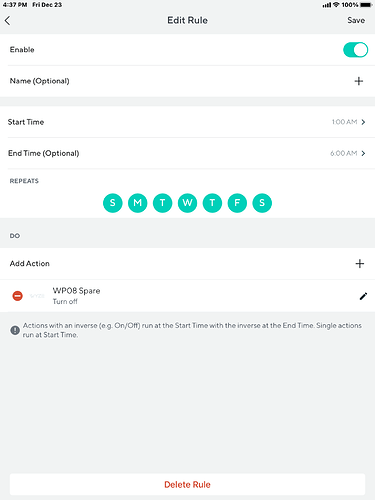 It should. Only difference is it is server initiated rather than local plug schedule. Six of one…

I missed that original question was about schedules rather than rules.

No worries. It is a great alternative and valid suggestion if the schedules don’t succeed. Having options is good.

Hey SlabSlayer, thank you very much. I’ll give this a try. I think the issue I had is it’s the same day that it turns off at 1am and then back on at 6am. Either way, I’ll let you all know if this works.

Theoretically, the schedule you had shouldn’t matter and should work. The two commands are executed from different command lines, unlike the rule that triggers on start and then reverses the trigger at an end time. Your schedule should turn the lights off at 1am and then back on at 6am.

They have recently updated firmware on the plugs to improve resident scheduling. What version of the firmware is your plug running?

Are you referring to the indoor plug firmware that is still in beta, but has not been released yet?

Hey SlabSlayer, thank you so much again for your help. I’ve clicked on your post above as providing a solution.

Thanks again. Very much appreicative of your valueable insight and suggestions.

Best to you my friend.

@SlabSlayer
Oops - I forgot about the 2022 plugs, and assumed it was the 2021 plug, but I now see that no specific version was mention in this thread - sorry about that.

Glad that it worked. As you have likely read above, there are others awaiting the release of the Beta FW to fix the scheduling issues.

Hopefully Wyze will release that soon.

I am so excited to apply this new firmware version! Thanks to the wyze team, and to all beta testers that have been involved.

I am remote from my devices for a few days, but I will try this when I return.

Great work everyone, and thank you for the work and the testing involved to fix this issue.