Wyze Plug Scheduling - Set Rule On Then Off!

I got 4 Wyze plugs so I could turn lights on and off on a schedule in our home. After getting things connected I created a schedule…

I went to add a rule and then the ‘Turns On’ option and and set my time on for 4:30pm. There was the handy ‘Add End Time’ option in the rule so I set it for 1:15am. Clicked save and thought I was good.

I wandered down the next morning and the lights were all on!!! What the heck?? I read the getting started section and forums. The forums showed there were occasionally problems with servers and such and the suggestion was to just redo the schedule. So… I did the same thing again and set up the schedule the way I did the last time.

The next morning the lights were all on! Frustration set in… After doing some more digging, with no luck, I had my ahh ha! moment. I realized that you needed to set a rule scheduling the plug/lights to turn on… and then set a second rule scheduling it to turn off. Still not sure why there is the ‘add end time’ option (which is where the confusion began) but clearly it’s not there to turn the plug off. Now I know… and hopefully this helps someone else.

Welcome to the Wyze community @lycosboy!
What app version are you running? What firmware are the plugs on? This may be causing the problems.

My lights are currently experiencing a failure to execute even simple schedules using the Wyze app. They have also become unstable since last firmware update.

I am in the Beta app, all firmware updated.

I have finally just replaced them with other brands (Tuya bulbs) as no other lights have ever caused me issues.

I use Alexa to control the automations, this is reliable, always executes as expected, and prevents reliance on the Wyze app for automations.

The “Add end time” has never worked for me either. You have to schedule a separate end time.

I found that if the end time went past midnight there would be issues. So, instead of setting it up to turn on lights from 4:30PM to 1:15AM, I would set it to turn off the lights from 1:15AM until 4:30PM. That’s how I got it done with one rule.

That’s an interesting solution! I’ll have to give it a try. Thanks!

Last night it tuned off at 11pm.

What does your rule history show? Does it show failed or is there no entry at 4pm? 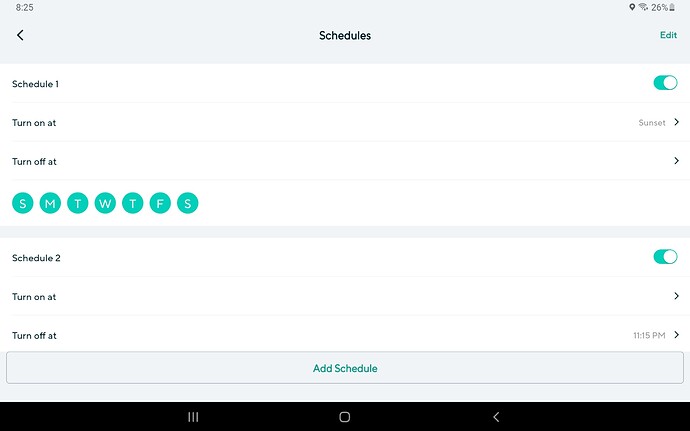 I used 2 schedules, the first to turn on the plug and the second to turn off the plug. It seems to work. Hope it helps.

How do you get there … have not set any rules. BTW, it did shut off at 11pm again. I doubt it will turn on at 4pm tomorrow. Only set time of day.

have not set any rules

How did you schedule the thing to turn off and on then? If you go to Account off the main app page, then scroll to rule history.

You can try what @manmatt75 said and make two different rules. That is a good suggestion.

Rules did work … what is the Daytime/Night time function for.

what is the Daytime/Night time function for.

That is a trigger based off of the outdoor plug’s built-in photocell day/night sensor.

has anyone been able to manually turn lights off during a schedule?

Yes, worked fine.
I had no problem doing that.

Manually by a light switch or in app? A schedule isn’t a continuous action, it’s an action at the start time, and an action at the end time if you have one. If you have a schedule to turn on a light from 4pm to 7 pm, you can turn off the light at anytime. If you shut it off before 7 pm, that’s fine. At 7pm your off light will get a off command again and it’ll do nothing because you cant turn off an off light. Now say you want to keep the light on after the of time if 7pm, be ready to turn on the light as it turns off, or disable the rule and re-enable it after 7pm.

The schedule I have is on at sunset and off at 11:00 pm. I will try it again tonight, but the other day I tried to manually turn off at 9:00 pm and it flashed off and right back on. .

Is this a Wyze bulb? Or a Wyze plug connected to a light? Where is the schedule? In the Wyze app or alexa? Howd you program “sunset”?

It is led lights in a tree and I set the schedule in the wyze app on an iPhone. In the app you can schedule the time lights go on either sunrise, sunset or custom, which is time of day. I am programming the wyze outdoor plug. 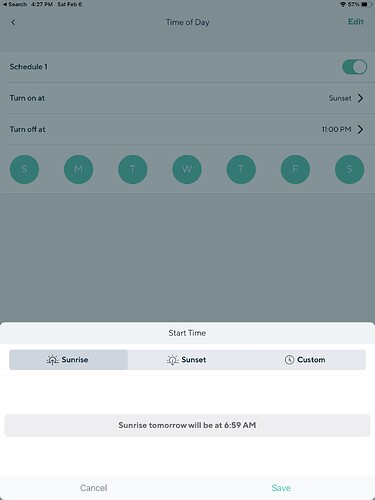 The title is Wyze plug scheduling,
The Wyze plugs either inside plugs or outdoor plugs have “schedules” to create specific on and off times