Camera image shifts/breaks up and causes it to detect motion

2 days in a row now I get an alert for motion in my living room. The house is empty during day ( zero motion), so of course my heart always jumps a little …

However when I look at video, the image just “jumps” for a second and goes back to normal. When I download and slow the video down, below is what happens … half the image shifts somehow and what’s normally on the right side ends up on the left with the whole thing split down the middle. The “glitch” is literally a fraction of a second. Anyone seen this before? 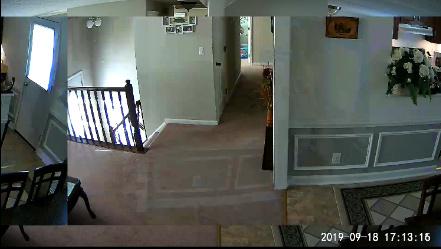 No I haven’t seen this before. It almost sounds like a power issue. Drop in power for a very short time, less than a second.

I have seen that happen on all my cameras at one time or another but it’s only once in a great while.
Many Other people have also reported this in the past

Yes, I have seen it on one of my three cameras. The affected camera is on a UPS and is closest to the router. It also recorded an event since the pixels in the detection area changed. It only happened a couple of times during broad daylight.

I’ve seen it before.

My front door cam has done it maybe a handful of times over its year-and-a-half life, but it hasn’t done it in a long time.

I had a front yard cam that had a bear of a time receiving my WiFi thru my metal wall (furnace), so yesterday I moved it from my garage to my living room as a test, and moved another camera out there. Now both are working fine, but the ex-front yard cam has been glitching once a day or so. So, if I were to suspect anything, I’d suspect maybe a missed WiFi frame causes it, since the cam in question seems to have trouble receiving. However, I suppose a missed frame could really happen anytime. Still evaluating that camera.

As I said my front door cam hasn’t had a problem in a long time, and other than what used to be my front yard cam, none of my other cams have any significant issue. Might have gotten 2 glitches on all the other cams combined, some of which are outdoors and further away.

Here is a similar discussion on it (even shows my Man Cave, lol):

Does anyone have this experience with Cam V2? Few of my Cam V2 indoor have random video jerk mostly on the bottom side. When it does that, it only jerks for half second, but enough to trigger the motion recording. I have realized that for quite some time now because there is no one home when it did that and alerted my phone. The rapid jerk appears like if “something” tried to possess my signal and manifest itself through the TV like one of those old time horror movies - The Ring. The V2 Cams ar…

Weird, but at least I’m not alone in this one. lol

I have 4 other cameras and none of the others are doing this. None are on any kind of USP so I’m sure if it was a power drop/surge I’d see it in the others too (or maybe not?).

As far as the wifi goes: this one is actually the only camera I have that is direct line of sight to the router about 15 ft away in the left side of the living room (some of the others are actually quite far on the deck, downstairs and far end of the house on the outside).

If it is a WiFi frame error, it could just be random.

For what it’s worth I haven’t seen the “issue” come back since the 2 times it happened when I posted about it!

Thanks everyone for the feedback!!