This has been going on for a while, but I just found a work around for an issue I’ve been experiencing. If my wife and I are both on the Wyze app at the same time viewing cameras, the video would stutter and then we would lose connection all together. So basically only one person at a time could view the cameras. I got a new router that allows me to see bandwidth that is being used per device. I noticed that when viewing a single camera, all 4 cameras in the group were transmitting data, upload and download. I thought that was weird so I ungrouped all the cameras. Now when viewing a single camera only that specific camera is transmitting data. As a side effect, for some reason, we can now view cameras on multiple phones simultaneously without the connection dropping out. It wasn’t a bandwidth problem for sure because each camera is maxing out at around 100kb/s, and my internet is fairly high speed 400/25. Just thought I would share this for anyone having a similar issue.

because each camera is maxing out at around 100kb/s

How did you derive that figure?

I found this one interesting, and my router can be set up to give very detailed packet tracking. I have a group of four cameras in my “Yard” group. I set up packet counters for all four of those cameras plus two other cameras that are not in any group. In the screen capture are two charts for each camera. The upper chart is the data rate (bytes per second) and the lower chart is the packet rate (packets per second).
My phone is connected to a different LAN than the cameras, so all packets between the two had to go through the router - and be counted. The charts below are looking at the traffic from each camera into the router.
Note that for the three cameras on the left, the left side of the chart is cut off because I had to do that to make all six charts fit on the page. That is why there is more essentially zero data showing at the beginning of the charts on the right side. 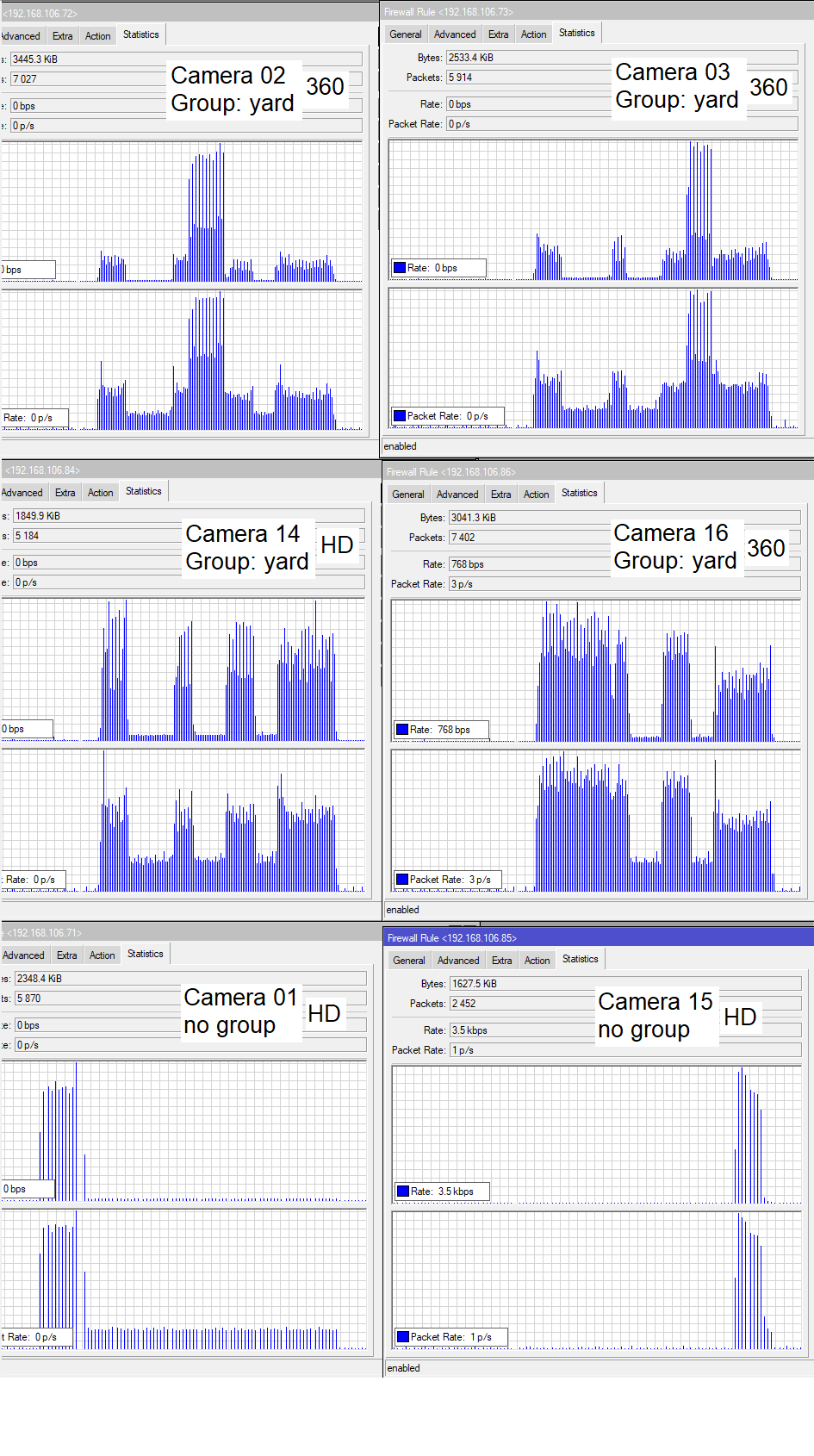 I reset the packet counters and then started the Wyze app on my phone. First thing I did was bring up Camera 01 for a little while. This camera is inside of a mailbox and therefore the image almost never changes, so the data rate is pretty low. Then I exited Camera 01 and brought up the Yard group. As expected, all four cameras started sending data. Then I selected Camera 16 for a while, then back to the group, then selected Camera 02, then back to the group, and then Camera 03, and then back to the group. Lastly, I exited the group and selected camera 15. After exiting Camera 15, I very shortly thereafter exited the Wyze app on my phone, and took the screen capture. It is important to note that the vertical scale is not consistent between cameras (that will be important in a bit).
What you can see is that the cameras in the group did not have much data until the group was selected. On cameras 02 & 03, there are essentially three rates involved. The first that pops up is what I’m going to call the group rate. All four cameras are seen. Then the rate drops way down when a different camera in the group is selected, and the date rate goes way up when that camera is selected. The latter high rate can be seen on Camera 02 at about the middle of the chart and for Camera 03 at about the 3/4 point of the chart. Camera 14 was never selected, so all you are seeing is the middle (group) rate and the low (some other camera selected) rate. I don’t have a good reason for Camera 16 behaving different than the others when the group was showing.
One of the other things I found interesting was that camera 01 & 15 continued to send some packets (not a lot) until I exited the app on my phone. The group did as well, but it is pretty hard to see on the chart.
BTW, a full size version of the chart can be seen at:
http://extraphotos.info/mikrotik/Wyze-camera-group-data.png

. I noticed that when viewing a single camera, all 4 cameras in the group were transmitting data, upload and download. I thought that was weird so I ungrouped all the cameras.

This is a GREAT observation and if true would completely explain the 360p reset issues and why they go away when cameras are ungrouped. It is also an an apparent BUG that Wyze should fix pronto. Thanks!

Edit: Sigh, but K6’s testing speaks against that.

Correct, that is where I got that figure.

that is where I got that figure

Just to be clear, that “upper left” statistic is not network “speed” … it’s the video bitrate.

I’ve had similar issues, but messing with my router never solved them.
I check each camera location for WiFi signal strength and all locations have either good or excellent signal strength. and my router doesn’t have that may things attached to it. So, I suspect either Wyze software or firmware is at fault.

“My cameras have all remained in “HD” mode for over 24 hours, which is a first for me. I haven’t made any system changes and I have 4 cameras “Grouped”.
Am I to assume Wyze made changes? Or, am I just randomly lucky today?”

Well your throughput is your throughput. Your nominal wireless network speed is dependent on a whole lot of factors starting with your router/access point. Many home networks these days can push something like 50- 100 Mbps. Of course your ISP is a limiting factor - if you’re paying for 5 Mbps DSL that’s all you can get to the Internet. (While phone to camera on the same WiFi can be faster.)

The video bitrate streamed by the camera is pretty directly correlated to how much network bandwidth it’s using - multiplying as necessary for bytes vs. bits as above.

Don’t these cameras use a puny amount of bandwidth compared to an average networks capability? I have an older Netgear N router that’s capable of “300+ Mbps”,“RECOMMENDED FOR UP TO 20 DEVICES”
I have 12 devices attached, 6 of which are mostly offline.
My Internet download speed is ~“90 Mbps” which is about average for my area. So, I just don’t see how a few Wyze cams operating at ~100 -200 KB/s can be a problem for the system.

Yes. No one said they were. They certainly shouldn’t be, I agree with you. 10 cameras each streaming “HD” at 100 KB/s (800 Kbps = 0.8 Mbps) would come to a measly 8 Mbps upstream, IF they were all streaming out to the Internet simultaneously.

That said, of course we keep in mind that real world wireless throughput is often FAR less than a given router/AP advertises.