Have several Cam pan’s, one started acting up last week, get a sound notification which was just a single click on the video, now it wont give a live feed. It still sends a motion or sound video, you just cant watch the camera live, it buffers three times and then states 1. force close app and retry 2.power cycle the camera. None of the other cameras have this problem, and after resetting the camera it still has this issue.

Did you try to force close the app as the notification stated? I’ve had several cameras that required that to regain the live feed.

I removed the app from my phone, factory reset my cameras, then reloaded the app and it seem to cure the issue

3 days ago I started having the exact same issue for some odd reason. I have 11 cams (4 outdoor, 2 pan cam, and 5 V3) and only 2 that will not load or feed are the 2 pan cams. Just last night I got a call from the house I installed all Wyze cams and same thing at their house. V3s are working fine but Pan Cams are down with exact same issue of not loading up for live feed. Something is going on and I think I remeber seeing an update right before all of this started happening. I’ll be on-site next week so will try calling them while I am out there with the cams. See two images of attempts and error message after attempts fail.

If removing cam and reinstalling the cam work for you please do share the outcome. Thanks. 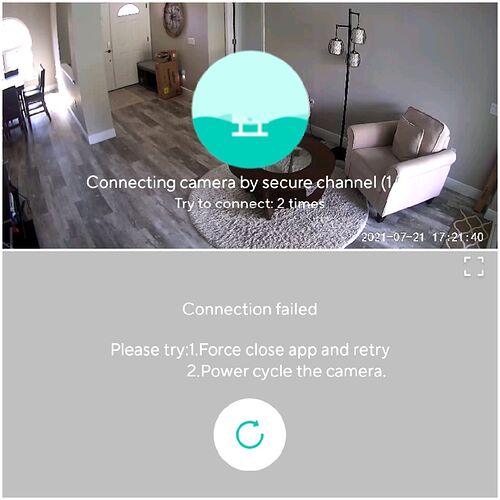 @Bob14 did you remove meaning delete the Wyze app or just killed the app in the background? I would hate to delete the app as there are so much setting including IFTTT. I am going to try removing the cam from the app and adding the camera back on as if I were to add a new camera. Still terrible to do but worth a shot.

After multiply failures i just totally removed the app from my iPhone, then re-loaded it from app store. Force closing and cycling the cameras didn’t help, after reloading and factory reset on the cameras i haven’t any issues now. It started when i did the update this past Saturday.