At night, bugs are setting off alerts on my outdoor cam. I lowered the motion detection setting but it only helps a little. I use the camera mostly for animal, not people detection. What now?

The bugs are attracted to the IR light. Best suggestion is to disable the IR lights on the camera, and install separate IR lights that illuminate the area of interest, but is somewhere else (off to the side a ways for example).

…or get a V3 camera. The V3 is amazing in its night vision performance. I had a V2, and looking into a totally dark area, it saw very little without the IR light. I killed the IR light, and the camera then saw very little period…
I replaced it with a V3, and it looks like a floodlight is on, with no IR light. I live in a city, so there are some lights around, but to my eye, I look into a totally black field, then look at the V3 output, with no IR, and it looks like an almost daytime shot. I would attach a shot, but I don’t see an attach option.

That for damn sure. Although lots of V2 vs V3 comparisons have been posted, here is one of mine. The V3 is sitting directly on top of the V2. Both cameras are pressed up against the double pane glass of a window. Both cameras are locked in daytime mode and the IR LEDs are disabled. In the V3, the three lights in the middle of the photo are blown out, but in the rest of the photo, you can see for example that my neighbor’s house across the street is yellow, the bottom of the flag on my flagpole is red and white (California), the trees have green leaves, and my truck is a dark color (maybe blue). None of those details are available on the V2. The V2 however does have far better detail on the bright lights. 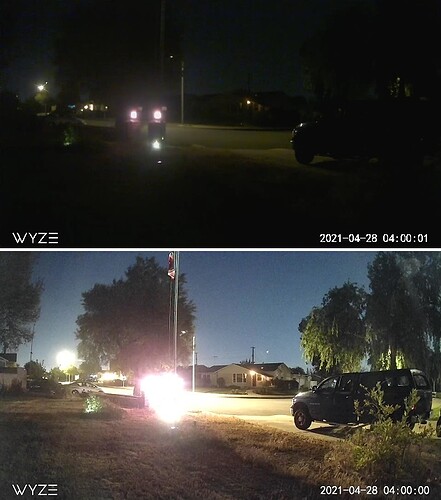 That is about the same results I get as well… I am replacing all my V2 cameras with V3 cameras ASAP. BTW, how did you do the attach?

I am not replacing my V2 cameras - I have 18 V2 and two Pan cameras. but I now have eight V3 cameras. Some are (at least for now) sitting right next to a V2. Some of my camera location would have zero benefit to having the better night vision of the V3.
As for the capture, there were several steps. First was to use the Wyze app and take a snapshot from each camera while they were playing back video from the uSD card (I was not awake at 0400). Next I brought up each capture in the photo viewer of my android phone, and shared each photo as an E-Mail to my primary home E-Mail. Then on my desktop PC, I received the two E-Mails, and saved the two photos. Opened Paint and opened each photo and reduced the size to 33% and arranged the two images as you see there. Saved that as a new file and uploaded that file into the message post using the upload icon on the toolbar. There are several other processes that would accomplish the same thing, but that is the way I did it.

Thanks for the detailed step by step. I am using the web application for Wyze interactions, and can not seem to locate the upload for attachments option…

I just finished a time-lapse of my new yard coming in… Two weeks using the outdoor camera, if I can locate the uplaod option, I’ll send it here… Sort of largish though… 300 MB. two weeks with a frame every 5 minutes.

Where the files save on the phone will vary depending on the phone. I do not use the phone for any of my Wyze forum posting - always a desktop PC.
For a large video, you would be far better to upload it to YouTube and post a link to it.

I have a V3. I turned off the IR lighting but the view went very dark and very little could be distinguished compared to having the lights on.
You suggested using a separate light placed away from the camera…where can I get this?