I’m going to try this with the “bricked” one and see if it revives it. I did try to downgrade the firmware via the SD card. But to no avail it seemed as if it would work but it went back to the flashing. I’m hoping the experiment will do something and at least be a fix for those who now can’t get a base station.

I had to go through two days of trouble shooting. I did get a email stating I never replied to a email that was sent. The funny thing was I never got one and had to tell them.

I got one saying I never replied to their email when I’m fact i never got a follow up.

Wow Muda888 you are my hero! The steps you published worked for me, I was getting tyred of answering support email to troubleshoot without any success.

Just to complement your steps, firmware version that I installed was wco_sta_sd_4.16.2.12. Also after getting the solid blue light for the first time, it would start blinking again after 5 seconds. don’t be affraid since the solid blue light would come and go until your are able to add it to the app. Once is added it wont go off again.

I would recommend everyone not to update, until a new firmware that fixes this comes out, so skip the upgrade that the app recommends.

Again, thank you very much Muda888!

Thanks for your save while Wyze figured it out, @Muda888!

They have an update for this now. If you have lost contact with your base, you will need to do a manual firmware update. Don’t forget to remove the SD card after the Base lights stabilize. Then you may have to do a power cycle to get it to come online, if it hasn’t already. Hopefully you won’t have to re-sync the cameras, but that is a pretty simple process if you do.

I was able to find base station firmware from July here:

After a week of waiting for a new outdoor camera it was finally delivered yesterday. But this brand new camera comes with the same dreaded problem of the flashing blue light. I noticed the light turned blue for a few seconds, but that was not enough time to open the app and connect.
We have several other indoor cameras that have been working great. This new outdoor camera is a big disappointment! I’ll stop recommending these cameras.

Here’s what worked for me:
Try switching the base station to a different port on your router. As long as it was different from the current port it worked for me, even after I went back to the original port.
I’m on a Google mesh network and it had been working fine until I loaned the base to someone else. It installed on their system just fine but my reinstallation was halted because we hadn’t deleted the base from their account. Once that was taken care of I had problems getting the router to initialize. Moving it to a different router port (and different cable) worked. I then plugged it back into the original cable and the original router port. Worked fine. Then setup the WiFi account and disconnected the base station from the router. All good.

Thank you for your suggestion! I will try that when I get home.
Your help is very much appreciated!

I posted about this issue a couple weeks ago. Earlier in this thread someone suggested restoring firmware from June or July. It worked well for me. Have you tried that?

How do ou go back to a specific firmware?

Directions here, make sure you follow them correctly: Use a good clean SD card

Great detailed steps. As you have seen others have benefited from this. Great job.

Thank you so much Muda888! Tried everything and only manual July firmware installation and reset helped.

I have a lot of time trying to get the base station to connect to wifi. Updated to newest firmware and also tried some of the older fimrwares. But the base station always just starts with yellow light for a while and then changes to blinking blue. The base station doesn’t seem to read the sd card. I’ve tried one that was laying around and also a brand new card.
The same happens when I try to connect on the router at work.
I’ve contacted Wyze support. They sent another base station, same problem.

What wifi equipment do you use? I had the flashing blue in my base after I went to wifi mode, but it connected after I went into my Ubiquity access point settings and enabled “legacy 11b” support in the ssid I was trying to connect to. I’ve seen a few times other users on here having the same success. My exact setting will probably look different than your router settings pages but I think there’d be a similar labeled toggle somewhere in the Wi-Fi settings. 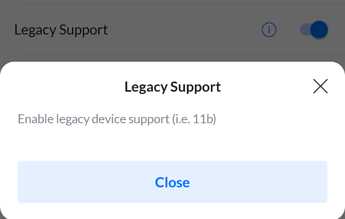 Ok The firmware update notes seem to indicate this problem has been solved, However, I cannot connect to Wi-Fi, and my situation is unique and different from most situations described here because I have those mesh network Plume pod thingys (and always wondered why the pods had an Ethernet port and cable, but now I know). So after setup, when I unplug the Ethernet cable connecting the pod to the base station, the blue light flickers; when I plug it back it and only then, the blue light becomes solid again and there is transmission. So I am inclined just to keep the Ethernet cable connected to the bas unless you guys think for some reason I shouldn’t.

It is so complicated. The system was set up by the TV cable company, and unfortunately, I am not that savvy. As I said, it is a mesh system and I am afraid to mess with it without calling the cable co’s tech support. I just wondered if it was OK to leave the Ethernet connection plugged in. I think I will call the cable system, however.

Yes it is OK to leave the ethernet connection plugged in. Mine has been plugged in for over 1 year and my 4 cams all have a good signal. I have never tried to use the base on wireless, no need.