I got an email today: February news flash which included the Outdoor Cam Solar Panel $19.99 and a $5.99 flat rate shipping. Yes, it does say that the price may vary in the app but it feels like bait & switch when I leave my desk top and go to the app to find out that the solar panels are $3 more in the app. So for the two solar panels I will actually pay more (yes, only one cent more–but still) than if I had stayed on the desktop. and I wasted five minutes figuring out what was going on and now another 10-15 minutes understanding that I had to create an account to write this message and write it.

I know that this seems petty but it is similar to Amazon charging $139 for Prime and then charging more for Prime products than the same non-prime product --just a little underhanded.

I have the same concern.

The February News Flash email I received today promoted the Scale S for $12.99 and flat-rate $5.99 shipping for unlimited number of items. But this is a catch-22. Apparently, the $12 scale promotion is only available if you order via the web; the $5.99 flat-rate shipping is only available if you order via the App. Who thought of this messed up marketing? I’d like to think this was a mistake, but my chat with Wyze support said “Only our developers can offer and modify promos from our app/website.”

This marketing trickery is not what I would expect from THIS company. And thus, I’m not placing an order via either App or website. I had planned to order several items with flat-rate shipping. I’m not going to pay $10 shipping for a single $12 item. 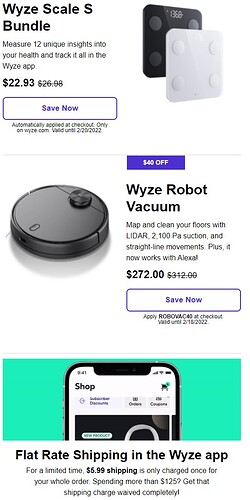 This is the first less than positive thing that I have had to say about Wyze and the first time that I have thought it would be useful to have a few thousand followers on Twitter and a few other social sites on which to express my feelings.

Oh, my God. The humanity!

Slippery slopes…I remember when Google was trying not to be evil?

Why are the prices different for many items in the Wyze APP versus Wyze website? For example, 44mm watch is $29.99 in APP but $35.98 on website.