Actually a rumor can only start with something at least semi believable. Like for example a yeti was spotted walking through downtown Portland holding hands with bigfoot.

Things no one would believe would be like Wyze fixing dark mode this century (not quickly) or a politician telling the truth.

I did notice that the rebranded Roku cameras and software have a dark interface. I’m also having an issue with some cameras being already associated with another service. Hope the updates get worked out. Love the cameras and the system.

100% agree. I’m sick of being blinded! Let’s put product upgrades & product releases on hold & get this dark mode released! Let’s even create a paid by users fund for dark mode! Come on Wyze!

Just here to make an update, while we still are not ready to do the full app rewrite we are looking into ways to get dark mode to more of the screens used like the live stream pages and areas like that. I will update again when I have some more definitive info.

It’s interesting that you say that since one of the recent iPad OS app updates changed the landscape multi-cam view from a black background to a white one. That used to be my work around. Now I just can’t use it any more and I’m looking for alternatives. Hopefully you guys can undo that change quickly so I don’t have to spend more money on someone else’s product.

@dyot13
The change you are referring to was not intended and we are working on switching it back currently.

Man, I hope you are serious right now.

When we fixed the -1 error for grouped cameras it caused some unintended issues in the iOS app that we are currently working on.

I feel like we should communicate in ways that Wyze wants. Using something really hard to see on a blinding white background

Bummer, used html code for bright yellow text and even this won’t work…

Is it just me, or has anyone else noticed that the devices that are darkmode compliant seem to have the fewest amount of bugs to deal with? 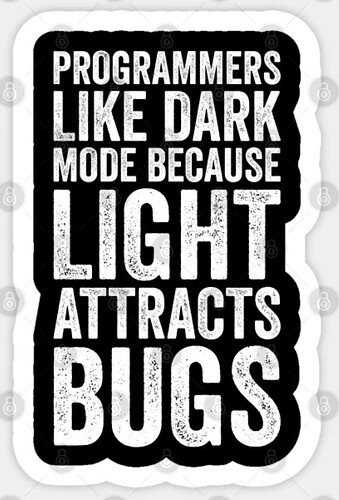 One more reason to add dark mode to the camera UI’s ASAP during this “Year of the camera!”

Glad to hear it’s being looked into. Maybe it will help keep more bugs away too. Worth a try. I certainly prefer darkmode myself, and often force darkmode.

I’m totally here for the announcement that Wyze is looking into doing a darkmode compliant Camera GUI!

Then I’ll just have to remember to avoid tapping settings in the middle of the night, but at least we can view our cameras safely.

Thanks for letting us know, Jason. I love all the updates you’ve been posting in comments on the wishlist/roadmap. They have been very welcome notices.