Anyway to give the CAM our own DHCP Client Name so the Router's Clients List shows the text ID with the MAC address?

Is there any way that we can get the Wyze V2 and Bulbs etc. to accept a user provided ID/name that we give it during set-up? If not, at least put a unique name like “Wyze V2 Cam: xx-xx-xx” in the firmware when it registers on our LANs?

I’d like to have it something more than a blank ID/“unknown” with MAC address exchanged with my WIFI Router in populating its DHCP Client’s List when connected to the network Would help clean up administration of our home networks and make it easy to see stats on a per cam basis in the router statistics admin screen. It’s hard to keep MAC address association to physical location all in one’s head - location text names are easier to associate.

Right now all I see is the a MAC address and that can get confusing when managing a larger number of networked devices from different kinds of devices and manufacturers. In particular I want to pre configure my router to reserve specific IP addresses to specific Wyze CAMs by name. It would just be cleaner to be able to see the name of the device in plain text right next to its MAC address. Right now I have so many different kinds of devices on my home WIFI/Ethernet router and I can only tell the Wyze cams from other devices by remembering that Wyze always uses it’s registered product prefix in the MAC address: e.g. 2C-AA-8E-xx-xx-xx ( where xx-xx-xx is the network device’s unique sub-serial ID burned into its ROM electronics). I note too that this can be different too when connected to a wifi router extender that overlays the Wyze preamble ID in its DHCP client registration when connecting.

It just seams intuitive that it would be simple to just have the cam’s firmware read it off the Device Name we put into the app or to download a short version name during device setup/initial-config into it’s non volatile device memory. Then just use that name when it registers itself with the router under that name and MAC address.

Here is a snapshot (edited to remove full MAC and other devices) of what my router shows for its DHCP Clients - no name at all for the Wyze devices - just MAC addresses.

I could say, get a better router: 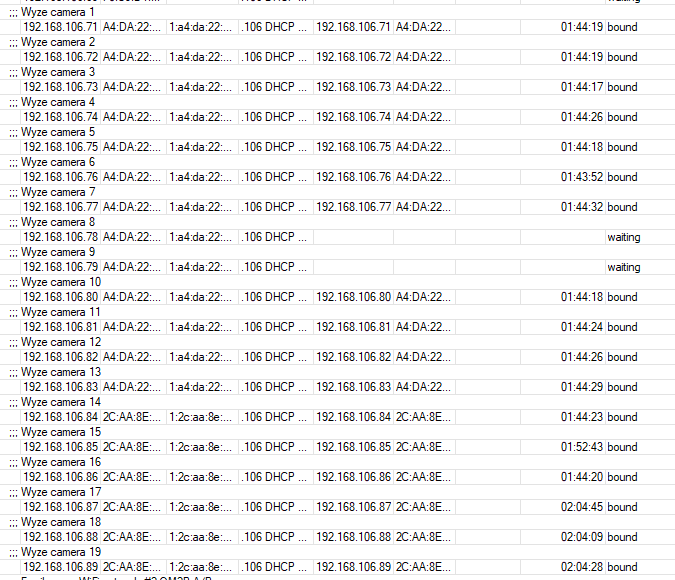 I have DHCP reservations in that router for all of my Wyze cameras. I can give them any name that I please. In the router, I just have Wyze camera n, but I could put more descriptive names if I wanted.

Normally the router as I understand the DHCP registration protocol gets the name from the initial data exchange with the client device that hands off the MAC address along with an optional field name. The reservation aspect is a different thing altogether. I can make a reservation by mac address but for my router (An Archer C7) it does not give me the option to assign my own friendly name. Some devices do it for us and some do not apparently. Or, some may be just dropping the name due to a firmware bug/oversight?

My router doesn’t get a name from Wyze devices either. The log just shows an asterisk. Most other devices give a MAC address, or an identifier and the last few digits of the MAC address.

Yeah, each router can have it’s own way of presenting the data when its reported from the actual connected devices. Some may truncate part of the name but some devices I suspect are not responding back to the router with the actual friendly-name of the device.

I found this useful link below for figuring-out/getting-clues about what other stuff is signing on to one’s wifi /ethernet router/LAN. I discovered some interesting things - like a forgotten networked AC Climate Controller and old laptop and smartphone I rarely use popping up in the statistics pages of the router’s info about packet rates etc.

All manufacturer’s of devices that can network on private local LANs and internet must have a manufacturer’s MAC address on file with the registrar. The MAC address takes the form:
XX-XX-XX-nn-nn-nn where the XX numbers are the manufacturer’s unique code/ID for network hardware series of electronics that they manufacture. The nn portion is essentially a unique serial number for the specific device one has connected/installed for that manufacturer. For example Wyze has these series of numbers for the V2 CAMs:
2C-AA-8E-nn-nn-nn (nn numbers will be your device’s unique ID /serial-number)

Just like one can go ping an IP address to see the way packets are routed to switches/repeaters in the local and wide-area internet network one can also do a reverse MAC address look up to scan the register of devices. It’s useful for sluthing out at least the manufacturer of the devices that are present on your network or might be coming in from outside with or without one’s knowledge/permission.

It can be an enlightening experience to find out what old forgotten devices one has in their home that connect to your LAN . And one can see even changes in who is manufacturing components for same devices but different versions/models that were purchased at different times due to changes in manufacturer of the NIC HW components or even a corporate change of ownership/buyout etc. All kinds of interesting product forensics and history to be gleaned from looking at this data.

I suspect from the low cost of the Wyze cams that Wyze is using really inexpensive Network interface chipsets that have limited feature support. That’s apparent since they only support 2 GHZ and not the 5 GHZ (and newer emergent frequencies that are imminent with 5G). I don’t mind too much having to use only the 2 GHz band to connect Wyze devices (since this lower frequency band does in my case seem to ironically have better range in my particular environment than 5GHz – if I configure the router’s WIFI channels that are off the channels my neighbor’s wireless devices use).

But the older standard implied by the lower frequency 2Ghz may be what is in play here with no device name association for connected devices. it may be simply the case that the component manufacturer of the chip-set used by Wyze in their cams never bothered to give any internal data registers to permit the Wyze firmware to address/read a unique device name from an internal HW register. If this is the case then the only alternative until they upgrade their chip-set in future new models is to get the fancier routers that permit users to create their own device name for a specific MAC address as K6CCC is able to do.

Although I am able to give each connected device a name in my router (NetGear AC1450) I also use a program (in Win 10) called “Who’s On My WIFI” free version. It detects devices as they are added to the network and you are able to give each device any name you would like. Attached is a partial screen capture of the Wyze section and it shows “Name” (with my misspellings), “MAC”, “IP”, “ONLINE ?”, “RECOGNIZED BEFORE”, and “REMOVE ?”. The first time it see a device it will give a verbal warning until you set it as recognized. I find it very useful.

Awesome info mwarren2. Thanks. Will check into it.
It must be emulating some aspect of the connection protocol to overlay a name into the router table ID’s. Could be a work around to lazy app or firmware design if it “sticks” to the MAC address each time it is repowered.

Mwarren2, am curious. What kind of devices are you using that are identified by the MAC address prefix: 02:0F:B5… ?

They don’t show up as “found” in the mac address reverse lookup utility.

It seems that half of my Wyze cams are 2C:AA:8E:XX:XX:XX and half are 02:0F:B5:XX:XX:XX. I don’t have a clue why the prefixes would be different. Maybe a Moderator can help?

Are the O2’s per chance Version 1 CAMs or different models? Did you purchase all the cams in the same general time period? If not any of those then it implies that Wyze changed their Hardware manufacturing company or bought out another company that was using their own identifiers. Am surprised that the 02:0F:B5s s don’t show up on the MAC look-up search. Curious.,

They are all v2 cams.

Most likely, they ran out of numbers with the first range. I just looked, my first 13 cameras ate A4:DA:22… and the remaining six are 2C:AA:8E… They were bought in several batches, over a period of about a year.

Remember, there are only 16 million and change MACs available with the same first 6 digits. How many have been built by the company that builds cameras for Wyze?

True. 16 million may seem like a lot of devices but when selling to large numbers of people nationally and internationally I suppose they have to have various new MAC preamble addresses to make each uniquely addressable